Home Articles TV + MOVIES All of the Pixar Films, Ranked 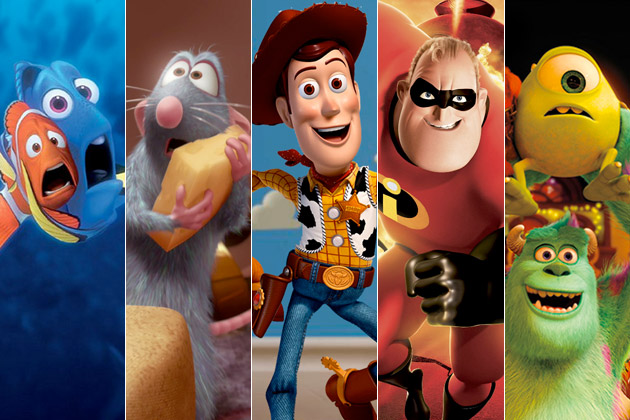 Pixar is the rare film studio that has consistently created critically acclaimed and commercially successful films. The studio has grossed an average of $259,000,000 per film in domestic box office (adjusted for inflation, that would translate to $336,000,000). 18 out of their 22 films are Certified Fresh on Rotten Tomatoes, with 16 films scoring higher than 90% fresh. Pixar films have garnered 15 Academy Awards.

Pixar has been successful in blending entertaining characters with innovative and creative stories. Their films strike a chord with both children and adults. Although their first film, Toy Story debuted when I was 18 years-old, I’ve had the joy of experiencing Pixar alongside my two young daughters and have been able to appreciate them for the wonder, awe, and laughter that they elicit from all of us.

Here is my definitive ranking of the Pixar films, from least to greatest.

Highlights: The worst Pixar film and only outright blemish on their otherwise stellar record. There really are no highlights to this awful film.

Highlights: It’s better than Cars 2. That’s about it.

Highlights: The photo-realistic landscapes and backgrounds make this one of the best-looking Pixar films. That’s about the only highlight, other than young kids will probably be entertained.

Highlights: I really like Cars … when it was called Doc Hollywood and starred Michael J. Fox and Woody Harrelson. As a film, it’s heartfelt, harmless, and morally responsible. The highlight is that they were able to convince Paul Newman to lend his voice to the film.

Highlights: I really like A Bug’s Life … when it was called The Seven Samurai.

No seriously, it has a lot of positive themes and messages. The story of a misfit ant named Flik who tries to recruit a band of warrior bugs to help defend his colony from oppressive grasshoppers is a fun but slight film.

Themes: Friendship, Teamwork, Follow Your Dreams, Don’t Judge a Book By its Cover

Highlights: Only Pixar could bring fresh ideas to this conventional, underdog tale. The visual array of all the monsters helps compensate for a thin story.

Themes: Mother/Daughter Relationship, Creating New Rituals & Not Being Held Down by the Past

Highlights: Brave holds the title of the most underrated Pixar film.

There is so much to appreciate about this film. Princess Merida’s ridiculously animated (in a good way) unruly hair is quite an achievement of meticulous detail.

The Scottish lore and scenery is beautiful. The female protagonist is a welcome shift from Pixar’s predominantly male characters. But Brave also hold the title of the Pixar film that also is their biggest disappointment. Not because it is a bad film (it’s not, it’s quite good). No, Brave is a disappointment because it could have been so much better.

This could have made the Top 5 Pixar films if they had sustained the creative storytelling from start to finish. Princess stories almost always focus on romance and courtship. Not Brave. Princess stories almost always focus on the heroine’s relationship with her father or an evil, oppressive female surrogate. Not Brave. Merida’s relationship with her mother is the centerpiece of the story.

Her mother is flawed but deeply relatable and presents both of their female perspectives with sensitivity and care. Even the decision to have the mother transform into a bear was inspired (daughters are normally the ones accused of turning into beasts during the teenage years).

But the rest of the story is underdeveloped and more quirky than creative. The father and brothers are amusing but unnecessary to the main story arc. As a father of two young girls, I wanted this film to be great. As is, this film is still very good.

Highlights: Among its humor and playfulness, Monsters, Inc. tackles how childhood fears and experience can be powerful forces in someone’s life. Billy Crystal’s Mike Wazowski may be his cinematic highpoint of his career and a character he was born to play.

Highlights: Giving Ellen DeGeneres’ Dory a full-length feature film allowed Pixar to explore her short-term memory loss at a deeper level. No longer is it just for comic relief. Instead, the entire film is about disability and perception. Many of the characters have disabilities and experience them in unique ways. They also perceive each other’s’ disabilities or challenges in different ways. It’s a powerful story of resiliency and acceptance.

Highlights: The premise and setup of the Inside Out was a creative highpoint for Pixar.  The studio has always placed a premium on relationships and emotionally charged storytelling. So how could they fail?  Well, the execution and final product wasn’t as brilliant.  Part of the problem turned out to be each character (or emotion) had to be one-dimensional.  This gave the characters of the film very little depth and room to grow.  The casting was flawless, but the film only turned out to be “enjoyable.”

Highlights: I watched this film with my wife and two daughters. The wealth of female characters in this movie is a welcomed delight in the animation and superhero genres. Representation matters, and far too many animated and superhero films are dominated by male characters. Women kick butt in real-life and they kick some major butt in the Incredibles 2.

Themes: Follow Your Dreams, Unlock Your Hidden Talent/Gift, Don’t Be Defined or Limited By Your Background

Highlights: Having a rat for an aspiring chef may have been one of Pixar’s bravest and boldest move. The central message that one’s background does not determine one’s potential is summarized beautifully by the elitist food critic Anton Ego, who writes, “not everyone can become a great artist, but a great artist can come from anywhere.”

Highlights: The majority of the film retreads familiar themes and storylines from the first two films (although they continue to tackle them with care and quality). It’s the powerful ending that provides an emotionally satisfying conclusion to the story of Andy, Woody, Buzz, and the rest of the gang. The sacrifice made at the end highlights the truism that our deepest pleasure comes from passing on and sharing with others what makes one happy.

Highlights: Pixar’s ability to create an underwater world is a marvel to behold. Marlin, the overly cautious clownfish perfectly voiced by Albert Brooks, meets up with Dory, Ellen Degenere’s amnesia blue tang, to search for his only son Nemo. Degenere’s Dory may be one of the greatest animated characters in history, making Finding Dory that much sweeter.

Highlights: A rare sequel that is about as equal to the original in terms of quality and enjoyment, Toy Story 2 picks up where the first film left off. The addition of cowgirl Jessie helps add a female voice to the buddy genre, and her devastating memories of her former owner’s abandonment was an early glimpse into Pixar’s willingness to tackle emotionally rich subject matter with the maturity and creativity often not found in animation.

Highlights: Every second spent with the robots is a delight. The first 40 minutes of Wall-E, with almost no dialogue or humans, is lonely, beautiful, and a highpoint for animated cinema. Having a VHS of Hello Dolly be Wall-E’s guide human emotions is a great way to learn how to woo and romance others.

Highlights: Coco is one of the most gorgeous and beautiful looking animated film…ever! The vibrant colors presented at the Dia de Los Muertos (Day of the Dead) celebration pop off the big screen. And the Land of the Dead that Miguel visits is a true feast for the eyes. The film is not overly reverent of religious beliefs and traditions but also avoids denigrating or dismissing such rituals and beliefs in the supernatural.

Highlights: The one that started it all. Who says toys need children to bring them to life. Using universally recognized toys (Mr. Potato Head, Slinky Dog, Bucket O Soldiers) was a stroke of genius, and pulled adults into a nostalgic time warp back to when they created their own worlds inhabited by their toys. The themes it tackled are universal, with everyone at one time or another feeling threatened by change, rejection, or being replaced by something (or someone) newer and better.

Highlights: So many things about this film make it special. The audacity and convoluted premise of attaching thoughts of balloons to a house and flying it to South America is only one odd but compelling aspect of this film.

The colors are majestic and jump off the screen. But the set-up is what makes Up such an emotionally satisfying film. Watching Carl and Ellie Fredricksen meet, fall in friendship, fall in love, make a home, tackle disappointment, and grow old together without a word spoken is one of the most powerful sequences in all of cinema. Without the first 10 minutes of Up, the rest of the film would come across as trite and ludicrous. With it, it’s a celebration of adventure, love, and fulfilling promises in life.

Themes: Family, Friendship, Acceptance, Unlocking Your Potential, Being True to Yourself

Highlights: My favorite Pixar film. The Incredibles is exciting, funny, emotionally satisfying, and creative in its storytelling. It embraces and contributes to the superhero clichés and skewers it at the same time. All the characters are layered and engaging. And having the entire family at the center of a superhero story is genius. The film tackles family, power, and letting go of the past. It’s not just the best Pixar film, it’s one of the best superhero films period.