Home Articles TV + MOVIES Why ‘2001: A Space Odyssey’ is Difficult to Love 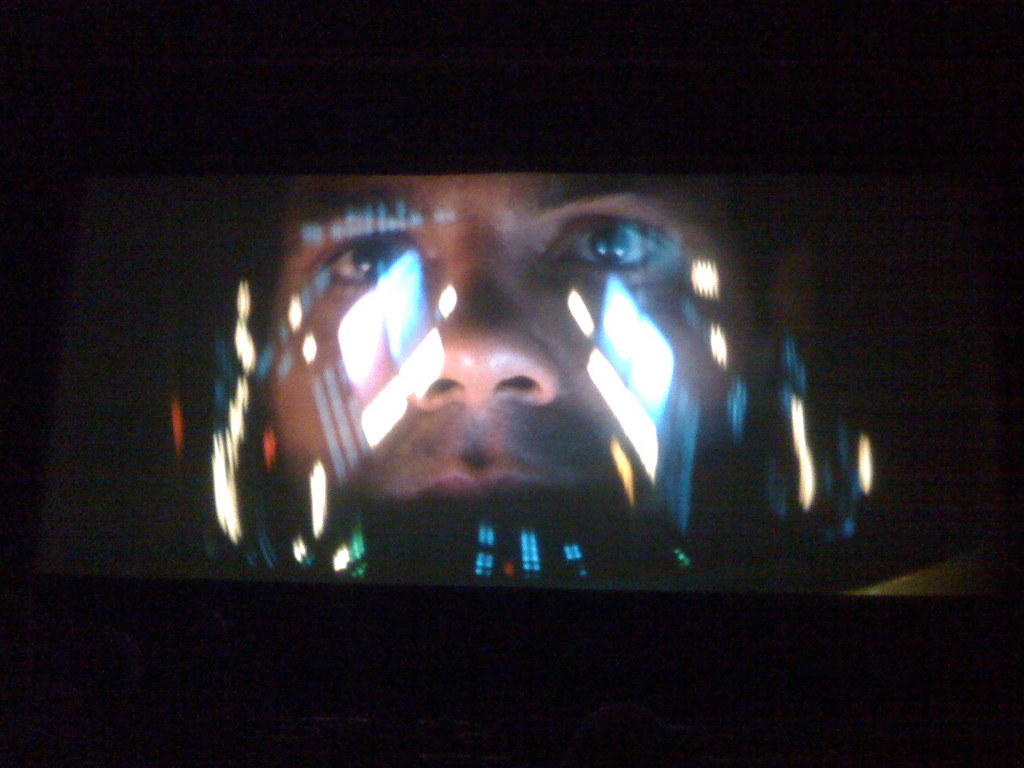 If I had to make a guess, I have seen 2001: A Space Odyssey 35 times from beginning to end. I’ve watched bits and pieces of it many more times than that.

I might owe my very existence to 2001. My parents saw it together while they were dating and later got married and had me, so our lifelong connection makes some sense.

There are times I love 2001. There are times I can’t take watching it at all. I cannot think of another movie about which I have such strong emotional reactions. That’s what sets it apart from every other film.

At first, 2001: A Space Odyssey was a boring science fiction movie.

I was too young the first time I saw it. I was maybe 7 or 8 years old.

I watched the australopithecines for a minute or two before I gave up. I kept flipping back and forth between it and other stuff (on one of those old Jerrold cable boxes … the ones with the 12 buttons, the three-way switch, and the dial) until I saw spaceships.

The spaceships didn’t make it much better, because there were no lasers or lightsabers or robots. There wasn’t any sound in space—except for breathing. The music went back and forth between the kinds of things my grandmother liked and something that sounded like screaming. I kept up with it, though, until that stuff at the end with the old guy in the weird hotel room. I couldn’t take anymore.

Turns out I was in good company: many adults—including Rock Hudson–didn’t get it, either, and still don’t. On its 50th birthday, I was at a conference in Washington DC just down the street from where 241 people walked out of its premiere in 1968. They all wanted Buck Rogers, too.

Then it was a good science fiction movie…

When I was a kid, I wanted to be an astronaut. As I watched the fiction, I learned a lot about the science. Once I understood the “how” behind the trip Dr. Heywood Floyd took to the Moon and how Discovery was getting to Jupiter, I began to appreciate the movie. While blasters and space fighters were fun, they were fantasy, not fiction. What I was watching in 2001 could happen. What I was watching on Star Trek, Dr. Who and in Star Wars could not.

I still didn’t get the music. Or the australopithecines or that weird stuff at the end.

… based on a great book.

I found the book 2001: A Space Odyssey by Arthur C. Clarke about the same time I found a copy of The Odyssey (there was probably a copy of Ulysses there, too, but I wouldn’t discover Joyce until much later). I must have been about 11 or 12 at the time. I lived in the attic of the house my dad grew up in and he and his brothers had left a bunch of old books, magazines, and albums up there. Everything I really needed to know started in that attic.

Once I read the book, I understood where the movie’s devotion to scientific accuracy came from—it was all Arthur C. Clarke. I also had a better idea of why HAL-9000 turned on the crew, which hadn’t made a whole lot of sense to me. Clarke’s influence made the film real, but revealed just how boring space travel would be.

The music still grated on me, except for the adagio Gayane Ballet Suite, which made total sense. I understood the australopithecines but didn’t pay much attention to that part. The stuff at the end made some sense but was still too long and weird for me and I often quit before the credits. 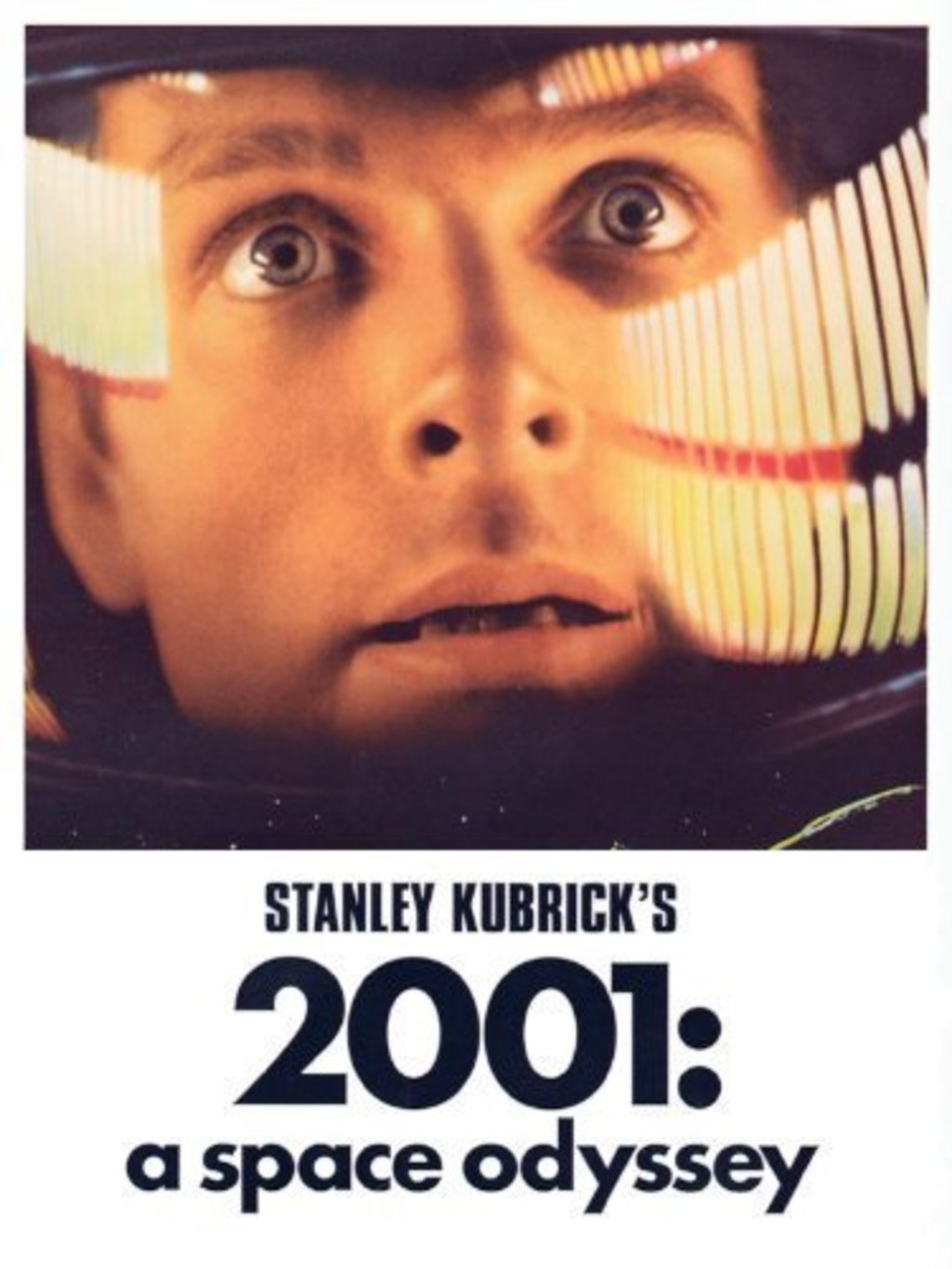 Then it was a Stanley Kubrick movie.

About the same time, I fell in love with Stanley Kubrick movies. The Shining and Spartacus were awesome. My friends and I—being adolescent males—took easily to A Clockwork Orange and Full Metal Jacket up until that scene in the latrine. We didn’t understand them, but we loved watching them. We laughed when one of us would expertly trounce another with an R. Lee Ermey-eqsue insult. And who doesn’t think a giant penis sculpture is hilarious?

I know now—many, many years later—that while we laughed at those things and other horrors rampant in those movies, we were all working through some tough stuff we couldn’t really understand at the time. Kubrick helped us do that: scaring the hell out of us and giving us a (somewhat uncomfortable) laugh.

2001 was special, though, and the two of us preferred to be alone. 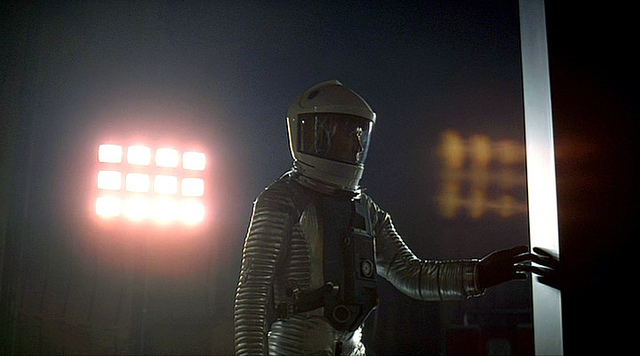 Then it was a philosophy movie.

In that attic, I also found copies of The Stranger, The Plague, The Metamorphosis, Nausea, No Exit and Three Other Plays, and The Myth of Sisyphus: And Other Essays.

I will not pretend that I understood any of them (and probably still don’t, really), but as I picked up the themes in them, and as I watched 2001 several times—and as I lived through the awesome, horrible, and wonderful changes that come with adolescence—I felt like I started to understand the movie and why everyone thought it was so important.

“I know now—many, many years later—that while we laughed at those things and other horrors rampant in those movies, we were all working through some tough stuff we couldn’t really understand at the time.”

The last sequence now made sense, and the Douglass Trumbull slit-scan stuff was cool, though I usually turned down the sound when watching it. Australopithecines … meh. 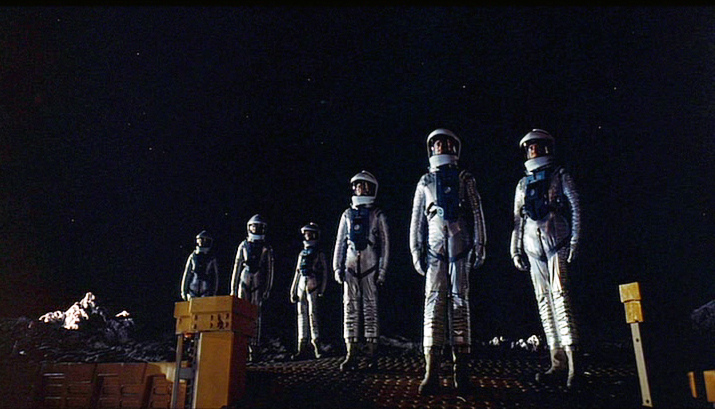 Then it was about looking into the Abyss.

While psychology was always my thing, I started college as a psych and music major. Then I met a girl who was a philosophy major and things changed quickly.

Long story short: music became a minor, the girl ditched me, and the second major in philosophy stuck.

At Drew University, I took two classes with Robert Corrington to fulfill the requirements for that major. They were life-changing. He blew the doors off my understanding of 2001: A Space Odyssey. He turned inside-out my understanding of life itself.

Through those classes and other rich college experiences, I (thought I) began to understand what Kubrick and Clarke (and Sartré and Camus and Kafka and Santayana and Dewey and …) were trying to tell all of us: ask more questions and only accept the answers that make sense according to your experience. It was perfect timing. Profound synchronicity.

I watched 2001 all the way through from that point on—australopithecines, Old Dave Bowman, Star Child, and all. 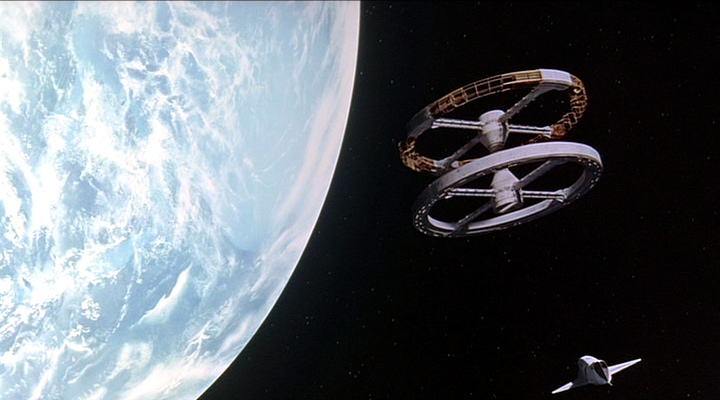 Now it’s about staring back at the Abyss.

Many years had passed since the second-to-last and last time I watched 2001.

Real life happened. There were new and immediate questions about career, marriage, family, and health to contend with. I didn’t have time for weighty cinematic journeys. But when the chance to write about this film that dogged me all these years was offered, I had to take it.

“2001: A Space Odyssey—either by intention or accident—is a funhouse mirror cleverly disguised as a science fiction movie.”

The truth is I was anxious and avoidant. I was worried that I would start to feel some of the intense emotions I felt so many of the other times I watched it. I was worried that I’d realize that all the weight I’d given it was doodley-squat. I knew I couldn’t do the film justice. But I did what any good specialist in anxiety treatment would do: I made myself watch it.

And here’s what I learned after all these years:

2001: A Space Odyssey—either by intention or accident—is a funhouse mirror cleverly disguised as a science fiction movie. [This makes total sense for a movie by a guy who bucked the rules of any genre.] Its stunning visuals and surface story about “vast and cool intelligence comes from space” fool you into thinking you’re watching sci-fi while pushing you to contemplate life and death, meaning and absurdity. It offers you very little well-organized sound.

The dialogue is sparse. The music is mostly nonsensical. You are forced to provide your own narration, answering profound questions about yourself in the process. If it isn’t frightening, you’re either completely self-actualized or you don’t get it. Whatever it does or doesn’t do, that’s on you.

When Underdogs Fly: How the Eagles Will Win Super Bowl LII