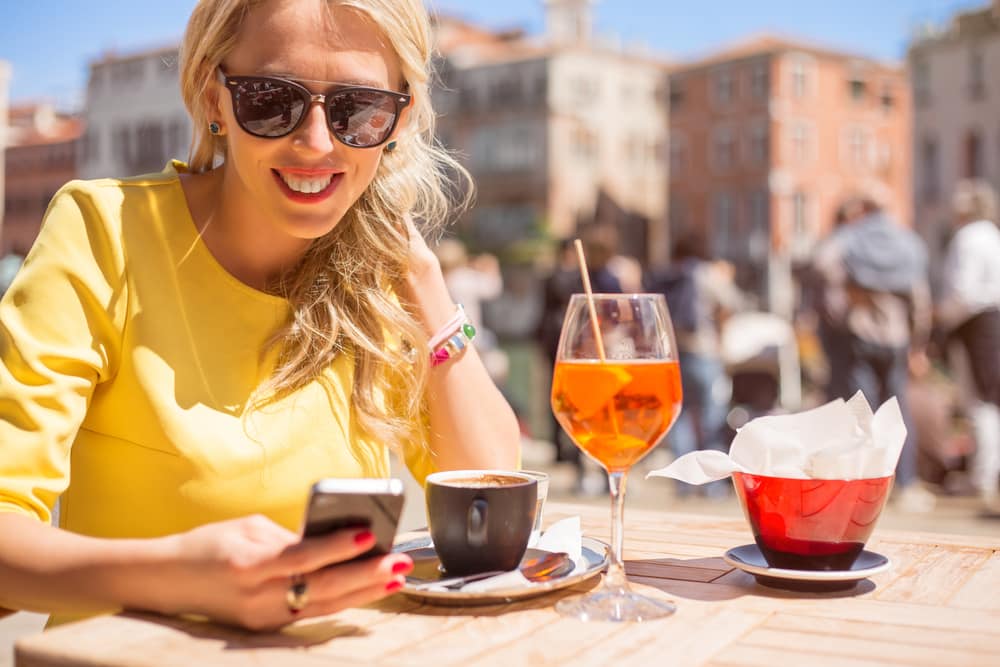 I was out at a restaurant the other night and couldn’t help but notice how many people were staring down at their phones. I look up from my plate of food and I realize I could have been totally naked and no one would’ve even noticed. And even if someone did notice I’m almost sure that they just would’ve taken a picture on their phones and gone right back to Instagramming, tweeting or emailing. There were at least a half dozen couples who were so fixated with their smart phones that they didn’t even bother to look up when their server dropped off their plates or when the other person was talking directly to them; and it wasn’t just adults. There was a table of three children all playing with their iPads as their parents hopelessly encouraged them to eat their food, and oh yeah, by the way, they too were clenching their phones. As I sat there judging them, I felt my pocket vibrate and my first instinct was to do what everyone else around me was doing; check my email, ask Siri a question, and find out what the latest Sports Center updates were. As I sat there in my chair, having to consciously fight the urge to browse through my apps, I was reminded of an article I had read in Psychology Today, entitled the “The Fine Art of Emotional Detachment”. In it, the author claims that Americans in particular need to get better at emotional detachment in the workplace. Looking around me, I had to frown at that suggestion. How many parents in this restaurant alone were browsing through work emails at that very moment? If anything, our society has become unable to detach from the workplace. We bring our emails and work memos with us to dinner, and have become conditioned to respond to a vibrating text alert, much like Pavlov’s dogs responded to their dinner bell; we just get so excited, we drool and have to pull up that message.

Emotional detachment isn’t necessarily a bad thing, in and of itself. In fact, in a person suffering from overwhelming emotions linked to trauma or a stress disorder could benefit from the notion of distancing themselves or “numbing” themselves to whatever may have triggered it. Yet I can most surely guarantee that it isn’t a good thing when it’s in reference to your kid’s iPad addiction. The concept of emotional detachment from a therapeutic perspective, implies a need to detach from overwhelmingly painful or maladaptive emotions, commonly associated with trauma. This is important to note because at the other end of the emotional detachment spectrum, we have those that are commonly referred to as Psychopaths. When you suffer from extreme emotional detachment, you are unable to relate to, or empathize with other’s emotions, thus being capable of committing atrocious acts without remorse or even hesitation. That’s of course the worst case scenario, but the basic concept remains the same; detachment from personal and/or social interaction. Looking around at the restaurant filled with people ignoring each other, kids ignoring their parents, parents ignoring their kids and each other, it became clear that the more linked and “connected” we have become with our iPhones and technology, the more detached we as a society have become with the immediate world around us; oblivious to even the most obvious of things. 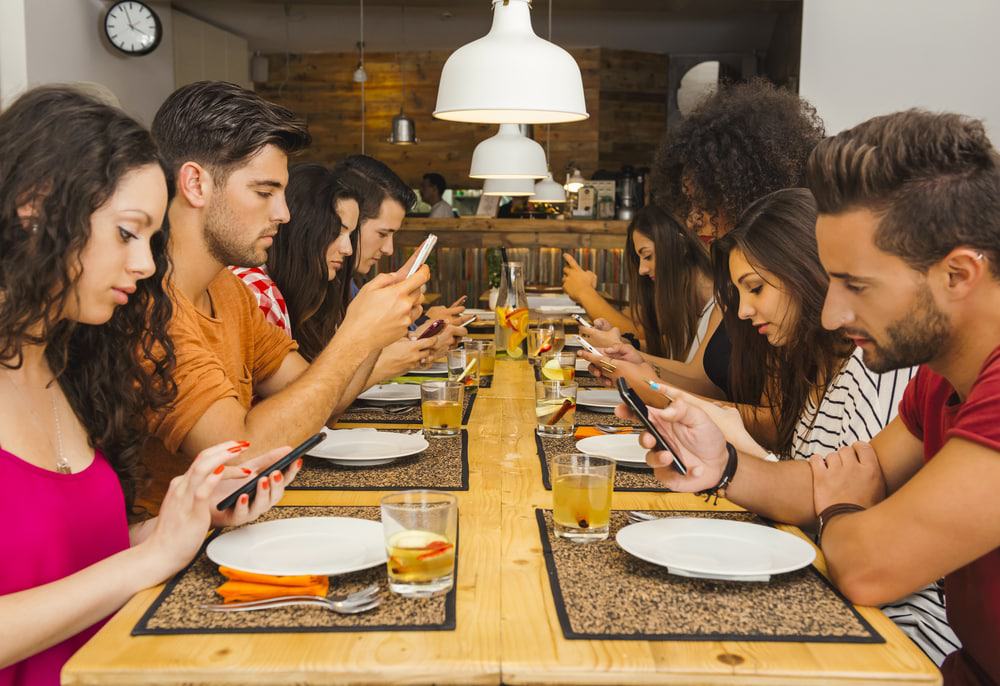 This is no new phenomenon that social media and technology are posing a threat to our family life, but many people want to take it further and attribute this danger to things like video games, social media and the internet in general. First of all, I myself am a bit of a gamer, and realize the benefits that can be found from allowing kids to play online games with each other and interact in virtual reality. However, I’m a little less clear on the benefits of being fully addicted to your iPhone. That’s right I’m saying that you are addicted to your iPhone, or Galaxy or tablet, or whatever your techno appendage has evolved into. Don’t believe me?Try going without it for a week. I did; and let me tell you, it was probably the hardest thing I’ve ever done.

[mks_pullquote align=”left” width=”300″ size=”24″ bg_color=”#ffffff” txt_color=”#000000″]“The initial fear that I was addicted to my smartphone was now corroborated. I was an iPhone addict.”[/mks_pullquote]A recent study by Dr. Russell Clayton at the Missouri School of Journalism found that reliance on your smart phone has been linked to stupidity. When I say stupidity, I mean that in the measurable cognitive decline in test scores, when a subject was not allowed to merely “have their iPhone on them”. Two groups of subjects in an experiment were given two series’ of cognitive assessments, one where they were allowed to have their smart phone on them (but not use it) and one where they had to leave their phone outside the room. The results were quite astounding in that both sets of groups scored significantly higher when they had their smart phone on them, then when they didn’t, leading researchers to find supporting evidence that iPhone separation anxiety is real and that it essentially…makes us stupid.

I scoffed at the notion that I was totally dependent on my phone. After all, I just used it to check email, surf the web, and occasionally ask Siri something entirely random. “Siri, who was the drummer for Journey?”.  But that first morning when I woke up without my phone, using my alarm clock as my designated wake up device, I felt naked (granted I don’t sleep fully clothed, but still…). I stumbled around for several moments, like a cave man, grasping for a club that wasn’t there, before I got dressed and stumbled around some more. I had questions in my mind that needed to be answered, such as “what was the current temperature outside?” “What special deals came through on my email this morning?” “What was happening on Facebook?” and “Who won what game on Espn.com?”. I felt confused, hazy, and lethargic as I struggled to make a cup of coffee and seemed more forgetful, and yes; stupid. That day was one of the longest of my life. I didn’t remember how to get to my favorite lunch place, because the navigation on my smart phone had always guided me. I didn’t know what to do when I had a moment of free time and was fidgeting with my hands just looking around at the world around me. That night, I slept restlessly, struggling to get to sleep, constantly thinking that I needed to check my iPhone, what if somebody was trying to reach me?(I had all my calls and texts forwarded to my non-smartphone), what if somebody commented on one of my old Facebook posts? What if somebody I knew was getting a sex change? The most ridiculous notions kept me awake nearly all night, until my alarm clock woke me up again. The initial fear that I was addicted to my smartphone was now corroborated. I was an iPhone addict; and that night had been my first true experience with withdrawal. For the sake of my work (I am a child therapist) I decided to end the experiment early so I wouldn’t jeopardize my own health and the well being of my clients, however I was convinced that smartphones are addictive and are essentially making us not only dependent on their ever-expanding applications, but also more detached to the world around us. 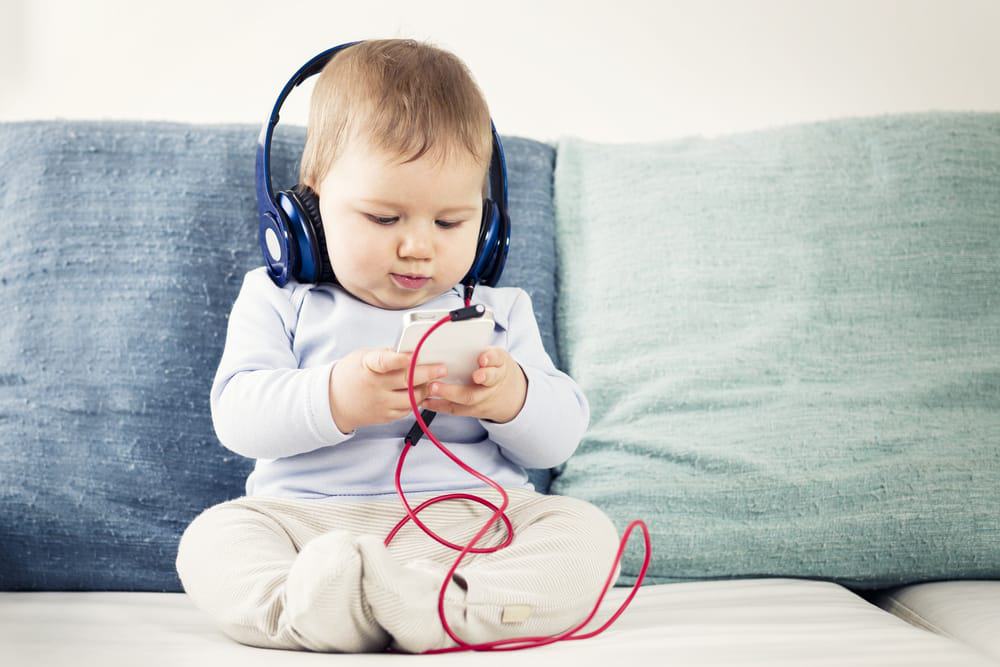 Countless studies, such as the one published by Dr. Dale Archer in Psychology claim that kids are actually becoming addicted to smartphones, in that they have an overwhelming desire to use it and display symptoms of withdrawal when it is taken away from them.  I myself have experienced it, and it was scary. I’m sure that parents out there may want to experiment themselves with this notion of iPhone detachment, but the real implications are a lot more frightening for the next generation of smartphone users (our children).