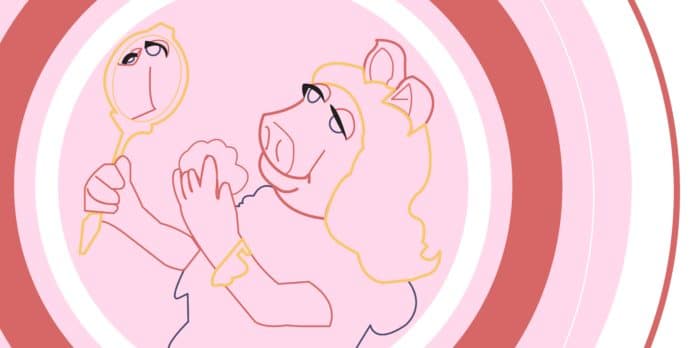 Why am I writing about Miss Piggy? Not only is 2019 the Year of the Pig, but March 1st just so happens to be National Pig Day! If massive qualities of bacon are your first thought, you’re likely not alone.

However, being a psychotherapist myself, the pop culture legend that is Miss Piggy was mine. She is one of my favorites for numerous reasons, aside from being a Muppet A-lister.

For starters, Miss Piggy’s biggest fan is unapologetically…Miss Piggy—and shouldn’t we all be our own biggest fan?

I realize a fictional cloven-hooved actress is not on the level of the Marie Curie’s or Anais Nin’s of the world, but can we learn a few life lessons from her pig power? I think so, because for women of my generation, the pratfalling porker with the golden tresses and bawdy attitude, was a trailblazing feminist.

“Miss Piggy stood out as a role model for female self-confidence, bravado, humor, and getting what she wanted out of life.”

If you weren’t around in the 1970s, then you’re forgiven. You see, back then the world was a very different place for women. Miss Piggy debuted in an era where female comedians rarely got any air time, and fiercely independent women were seen as domineering “bitches”—even ones made of felt. That said, Miss Piggy stood out as a role model for female self-confidence, bravado, humor, and getting what she wanted out of life.

This boss bitch was truly ahead of her time. Here are the 5 reasons why I believe Miss Piggy is the original boss bitch.

In the Muppet universe, one could say she was the classic rags-to-riches story.

Wikipedia reports she came from humble beginnings from a small midwestern town. After her father died in her youth, she was raised by an unkind mother. It even goes as far as to say that Miss Piggy “had to enter beauty contests to survive.”

As an outsider from the sticks, she got ahead not by her looks, but by grit, resilience, and chutzpah.

With early traumas, people can often get stuck in time, but this babe moved on. She hoofed her way to Hollywood stardom, achieving the holy trifecta of hits in film, television, and books. She even had her own perfume line, Moi —which, thanks to it’s certain, “je ne sais moi,” convinced the world that it’s sexy to smell like a pig.

So, she’s kind of a branding genius, too.

As a psychotherapist, I cannot ethically diagnose an individual I’m not treating (nor can I legitimately diagnose a fictional character), so this is purely speculation. But, I feel like Miss Piggy became what Abraham Maslow defined as a self-actualized person, which is the “full realization of one’s creative, intellectual, or social potential.”

In today’s parlance, we’d say Piggy was the “best version of herself,” nailing every step in Maslow’s hierarchy of needs: food, water, shelter, safety, job, community connection, and yes, feeling loved….by a frog, no less.

My guess is Miss Piggy transcended her past by doing a lot of self-work to heal her deep childhood wounds before she could reach her full potential.

Surely, she didn’t merely slap some lipstick on suddenly become an authentic, multi-dimensional, and happy individual. More likely, Miss Piggy put in the work and found a way to turn her wounds into a warrior spirit.

I mean, just look at her. She wears her strength of character right on her leopard print sleeve.

In a world of tummy tucks and butt-lifts—Miss Piggy embraces her natural body.

While managing to stay in tremendous shape, she still preaches “snackerizing” over jazzercising. She owns her sexuality too, never hesitating to display it to the world. She flirts wherever, whenever, and with whomever—no one is off limits… Sorry, Kermit.

Back in the 70s, a culture obsessed with objectifying women while slut-shaming anyone who dares to color out of the societal lines, this was freaking revelatory.

“All these years later, Miss Piggy remains unapologetically herself.”

She still thrives in a male-dominated profession with scores of male bosses up her ass (see: Frank Oz’s hand).

She still falls down stairs with dignity and grace.

She still clears her throat on TV like a trucker, never thinking twice.

She can still cry on a whim and pull herself together in a flash.

She still expresses her emotions relentlessly and never ends any conversation until she is finished. And Miss Piggy remains an artist at expressing her joy and passion for life, often leaping ecstatically in the air when things go her way.

3. She Embraces her Flaws.

She is also brutally honest about her own inner ageism. One day, she just decided, “I’m not going to age.” Brilliant, right?

Miss Piggy tends to say things lot of women are feeling, but don’t express. Her ire is often provoked by perfect people, a common feeling, especially now when our media’s relentless projection of perfection can be maddening.

Miss Piggy’s relationship with the media seems unique, too. Unlike other celebrities, they never judge her for her eating habits, animal urges, or overt sexual advances. Instead, magazines like US Weekly flaunt her independence, style, and sass with commentary like “Fierce Pork in Florals,” or “Pig Loves Leopard!”

She clearly sets boundaries for how she wants to be treated, including to the media, living the adage, “We only let people treat us the way we let them.”

As long as we’re speculating, another possibility is Miss Piggy has achieved what psychologists call being “differentiated,” which is when a person stays in touch with their true selves while remaining connecting with outside groups. This skill allows us to better see how others project false images onto us.

It also allows people (and in this case, pigs) to have thicker skin, and avoid destructive influences, so we don’t lose sight of our true selves.

4. She Continues to Grow & Better Herself

Okay, so nobody’s perfect, not even Miss Piggy.

This is clear with Miss Piggy’s personal struggles with violence behavior. As a fangirl, I hesitate to even address this. I’d much rather spin it towards feminism, and defend her actions by comparing her schtick to other physical comics. Admittedly, I question my motives for wanting to sweep her violence under the rug; it’s like a mirror of what happens in the real world, and thus a reflection of how we make excuses for violent behavior because we “love our abuser.”

Of course, we all know healthy love does not involve abuse, and it seems with time, the more mature Miss Piggy has grown, she seems more peaceful. She has found a way to grow.

This pig even advertised her new non-violent nature with her perfume’s tagline, “I believe if we all smelled better, we would all get along. Remember, this is not about perfume, it’s about world peace.” I sincerely hope she holds true her own words.

Remember at the end of the day that we’re talking about a Muppet. Case in point, real life portrayals of domestic violence are messier than those shown by a fictional pig.

5. She Remains a Feminist Trailblazer

Today, you can see Laga Gaga inspiring us to accept and love ourselves because we are “born this way.”

And of course, Beyonce pushes gatekeepers like Vogue to see different ethnicities in all their natural beauty.

Miss Piggy may not be in the limelight as she once was, but her powerful presence lingers on in today’s pop culture landscape.

I feel like women everywhere can learn valuable lessons from her story (good and bad) so that we may embody the confidence of a pig, and turn her personal mantra, “Hi-yah!” into a calling card for big, bad, boss bitches everywhere.

5 LIFE LESSONS TO PIG BY