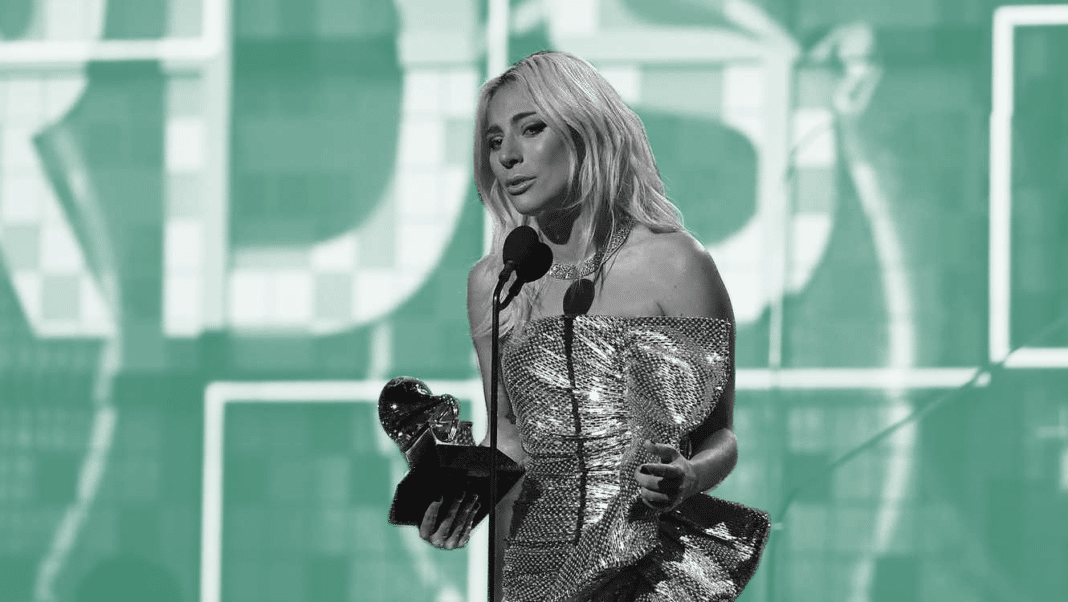 From her stellar acting on the big screen to her status as a musical hit-maker, Lady Gaga embodies a spirit of daring authenticity and artistry.

On stage at this year’s Grammy Awards, she dazzled us in a sequined jumpsuit that shimmered like the night sky as she belted out “Shallow,” the theme song from the movie A Star Is Born.

But there’s more to Lady Gaga than movie roles, wild outfits and hit songs. Her chameleon-like persona and her courageous disclosures about her personal life bring to mind the words of Carl Jung:

“But, if you have nothing at all to create, then perhaps you create yourself.”

Of course, the multi-talented chanteuse creates plenty of art. Yet she seems equally passionate about constantly creating, recreating and discovering herself. That includes speaking out about mental health and her experience as a survivor of sexual assault. It’s as if she’s showing the world who’s boss and exercising total ownership of who she is.

Lady Gaga embodies a spirit of daring authenticity and artistry.

If she wants to dress as an alien one day and a sparkling panther the next, so be it. She’s Lady Gaga, and that’s how it is.

“Having someone so creative and influential to look up to was very empowering for my clients. And these young people needed empowerment.”

It became clear to me that Lady Gaga’s openness, brave self-expression and compassion touched the lives of real people when my clients at a homeless youth shelter told me about Lady Gaga’s Born This Way Foundation and the positive impact she’d had on them.

Lady Gaga wasn’t just a pop star. She was a beacon of hope, a warrior who fought the good fight and showed them they could do it, too. “She’s totally herself, and nobody can take that way from her,” one of my clients said. And I agree.

Lady Gaga and her mother Cynthia Germanotta created the Born This Way Foundation in 2012 “with the goal of creating a kinder and braver world.” It’s also focused on reducing stigma and giving young people a voice.

Having someone so creative and influential to look up to was very empowering for my clients. And these young people needed empowerment. They were all in crisis. Some of them were abused, abandoned or running away from dangerous situations at home.

Some of them, like Lady Gaga, were survivors of sexual assault. And I can tell you that these young women often seemed like they were in a battle to reclaim their bodies, minds, and souls.

“She’s showing the world who’s boss and exercising total ownership of who she is.”

The abuse had taken that much away from them. And they needed as much inspiration as possible to take it all back.

So here’s a list of just a few of the ways Lady Gaga has been an advocate for healing and mental health.

In addition to her stunning performance of “Shallow,” Lady Gaga made her Grammy acceptance speech about mental health.

With moving words, she talked about how important it was for her to star in a movie that tackled the subject of mental health and how essential it is to keep the conversation going.

2. Co-Writing an article on suicide, depression and mental health treatment.

In 2018, Lady Gaga teamed up with World Health Organization director-general Dr. Tedros Adhanom Ghebreysus to co-write a compelling article on suicide, mental health and the lack of resources and funding dedicated to helping people with mental illness. The article was published by the UK-based news source, The Guardian.

3. A video call conversation about stigma and mental health with Prince William.

In the spring 2017, Lady Gaga and Prince William shared a video conversation in which they discussed their personal experiences with stigma, speaking out, advocacy and getting treatment. Prince William talked about his involvement with Heads Together, a UK-based organization that aims to reduce stigma and open the conversation about mental health.

“Lady Gaga wasn’t just a pop star. She was a beacon of hope, a warrior who fought the good fight and showed them they could do it, too.”

4. Co-Founding the Born This Way Foundation.

Lady Gaga’s aforementioned Born This Way Foundation is worth another plug here. The foundation’s website is all about programs that empower youth and inspire bravery. The site also features a personal letter from Lady Gaga about her Post Traumatic Stress Disorder (PTSD) diagnosis and a wonderful list of resources for those in crisis.

5. Sharing a heartfelt letter on Twitter when her documentary premiered on Netflix.

In the letter, she opened up about the loneliness that accompanies fame, facing physical and emotional pain, making the record Joanne in honor of her deceased aunt, and realizing her own vulnerability. She also discussed her own struggles with mental health and how much love and support she’s received from her family, friends and fans.

6. Fearless creativity and bravely being herself.

Lady Gaga was an inspiration to my clients in a homeless youth shelter, and I’m confident that her work, her openness and her advocacy will continue to inspire and support countless people who are working through trauma and mental illness.