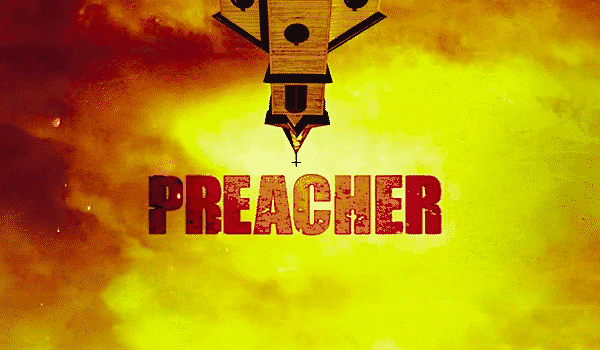 ]Like Tarantino’s stuff, it’s whacked-out funny, punctuated by shocking bursts of violence. It has featured several of the most stunning set pieces ever on television (like Cassidy the vampire fighting for his life on a private jet and Fiore the angel repeatedly dying and instantly resurrecting to the delight of magic show audiences). Like Buffy it uses supernatural plot devices to make some profound statements about real-life–case in point is the show’s depiction of hell as having to relive the worst day of your life for eternity.

To be sure, Preacher is not for the faint of heart. In addition to pushing network television’s limits in terms of gore, profanity, and sex, it has been shockingly blunt in its religious themes. The lead character, Jesse Custer, is a former bank robber who tries to reform himself by following in his father’s footsteps to become a small town preacher in Texas. He becomes, essentially, a superhero when he is imbued with Genesis, the offspring of an angel and demon. He sets out on a quest to find God. This is not a spiritual quest, mind you. He discovers that God is missing, as in left heaven and is hanging out somewhere on earth (listening to jazz, apparently).

A second season episode depicted Jesus having sex before the last supper, impregnating his lover. Later we see his descendant, the modern-day messiah, with an intellectual disability (nee mental retardation). All this understandably drew the wrath of Christians. I’m not easily offended by this kind of content, but I was disappointed that this innovative and entertaining show went too far.

Given the backlash, I predict the showrunners will scale back the incendiary commentary on religion. That would be a good thing because Preacher has a lot to offer. Jesse is one of the more compelling and multifaceted heroes you’ll find on television. His main antagonist is the menacing Saint of Killers. He was introduced adroitly and slowly during the first season.  In Season 2 he started really kicking butt. As Season 2 drew to a close he was down but not out, and I really hope to see more of him.

Previously I’ve described my Heroism Quotient (HQ) and Villainy Quotient (VQ). To refresh, I rate villains along five factors (0-20), yielding a Villainy Quotient (VQ) with a maximum score of 100. The factors are drawn from the thinking and research of Dr. Philip Zimbardo (of the Stanford prison experiment) and other experts on evil. The higher the VQ, the more diabolical the villain. 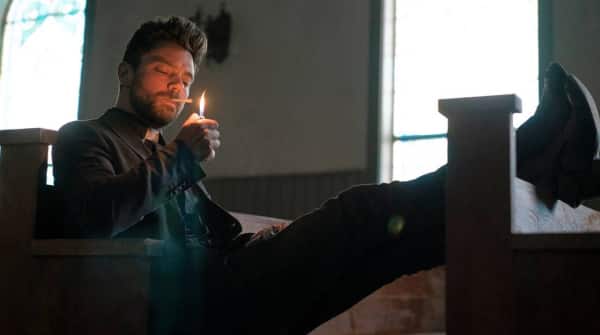 So here’s how I score The Saint of Killers:

The Saint is a spree killer. To date, the show has revealed three episodes of carnage. The first was during the Civil War when he fought for the Confederacy. His savagery on the battlefield earned him the moniker, Butcher of Gettysburg. The second episode came post-war when he lived near Ratwater, Texas with his wife and daughter. Domestic life seemed to have tamed him, but when the cruelty of Ratwater low-lives keeps him from saving his family, he exacts revenge; his grief and murderous rampage deprive him of his soul. Finally, the Saint is released from Hell to kill Jesse and release Genesis. Along the way, he kills dozens with his pistols, sabre, and bare hands. I’m not giving The Saint a max score on this factor because during his first spree he is a soldier, and soldiers are supposed to kill the enemy in a war. During the second spree, revenge drives him, not amorality. But when he is unleashed on earth as a soulless demon, moral restraints are gone. His score is 15.

2. Degree of harm or damage done: I have to give The Saint 20 out of 20. Between the Civil War, Ratwater, and modern-day Texas and New Orleans, the body count is well into triple digits. And he’s not done yet.

3. Track record of evil-doing: He tops out here at 20 as well, having been a murderer since the 1800’s. Few pop culture villains can match that long of a track record.

4. Malice towards victims, intent to cause suffering: He gets a high score of 16 here, mainly because of his intense hatred of Jesse. The Saint agrees to hunt Jesse in return for getting to see his wife and daughter in heaven. Jesse stands in the way of that, drawing his vitriol. The Saint doesn’t just want to kill Jesse, he wants to torture him.

5.Taking pleasure in actions:  The Saint’s malice towards Jesse notwithstanding, he doesn’t seem especially sadistic. When mowing down cowboys, angels, police officers, gun enthusiasts, and mobsters, he comes off like the Terminator- a ton of resolve but no glee. So I’m assigning a 7 on this factor.

Sum up these factor scores and The Saint’s VQ is 78. His score is one of the highest I’ve given, not far off Negan from The Walking Dead.