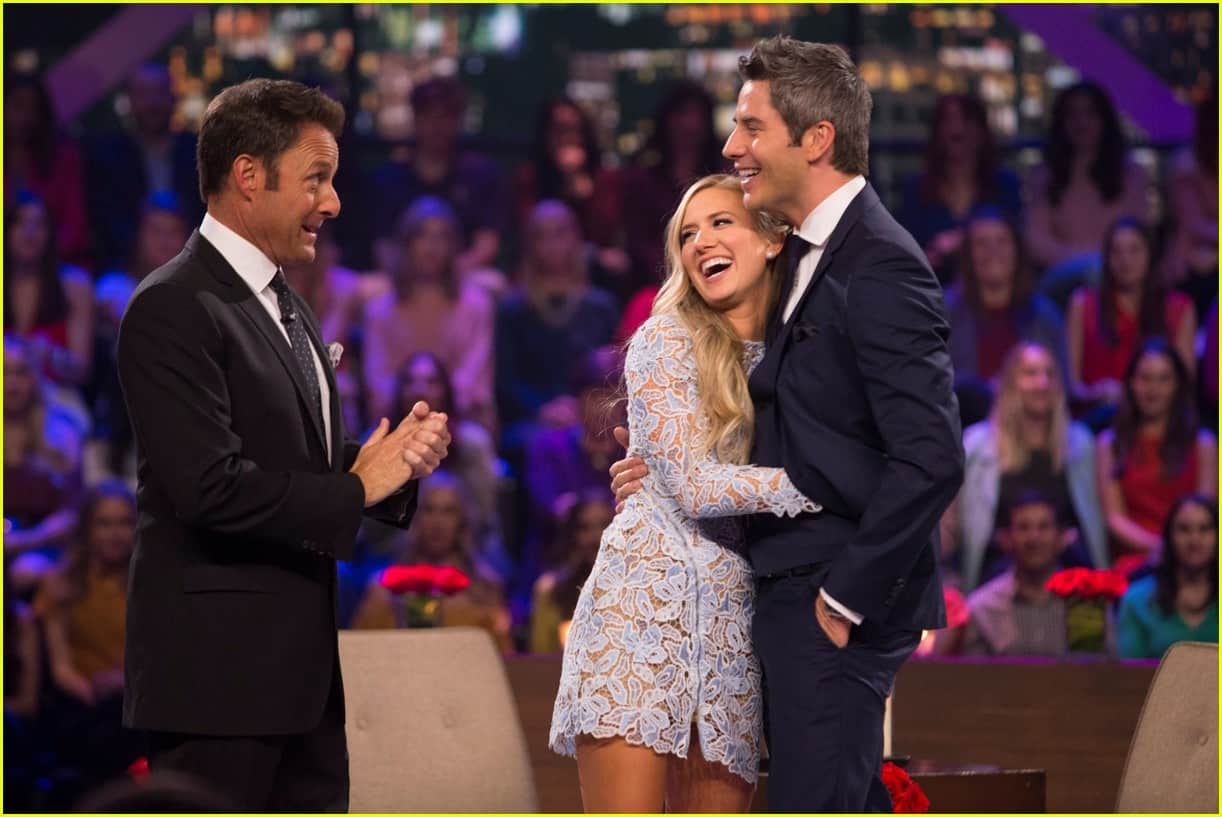 I don’t like spoilers, about anything, so I deliberately avoid any websites or social media that might give stuff away about The Bachelor.  This Monday afternoon, just hours from the airing of After the Final Rose, my colleague Angie Mayo texted me wanting my prediction about Bachelor Arie.

My reply:  “I predict that he will give the Final Rose to Becca, but then pull a Mesnick and dump her for Lauren on After the Final Rose.” Well, I was mostly right.

Arie hit the brakes with Becca and reunited with Lauren weeks before the season finale.

How did I come by my prediction?  In part, I was reacting to the usual hyperbole from host Chris Harrison about how the last lap of Arie’s race for love would be the most “shocking” in Bachelor history.

The drop-down menu for Bachelor “shocking endings” is not that long, actually:

A. Bachelor(ette) picks nobody (ala Brad Womack– at least the first time around)

B. Bachelor(ette) picks somebody but then switches (ala Jason Mesnick)

C. Bachelor(ette) picks both and all three move to Utah

Given that option c. has never happened on the show, I ruled that out.  Given that Arie (aka the Kissing Bandit) had told both Lauren and Becca, repeatedly, that he was in love with them, I ruled out option a.  So that left b.

More than playing the odds, though, my prediction came from reading Arie and the dynamics of his two relationships.  Again, he professed his love for both. He made out (a lot) with both.

But despite the glow of energy that always emitted from Becca, he looked to have much stronger chemistry with Lauren—the way he looked at her, how close they sat together, etc.

The reason for that chemistry is kind of mystifying.  Lauren may have set a new standard for this show in terms of neediness.  Can she really be a black belt in Tae Kwon Do?! She was constantly freaking out about where she stood with him and the fact that he was dating other women.  And Arie was always there to reassure her. Arie and Lauren made me think of Chandler and Monica from Friends.

Monica acknowledged that she was high-maintenance.  And Chandler declared that he liked maintaining her.

In contrast, Becca’s much more independent (she’ll be a rock star as The Bachelorette).  Arie said he saw them as a team and he considered her someone he could lean on. There was a key moment in Peru when Arie’s family debriefed their time with Lauren and Becca.

His parents and siblings all noted the obvious—that Becca seemed like a better fit for him in terms being confident, assertive, and having an adventurous spirit.

Arie’s face said it all—he was disappointed to hear all that. He wanted Lauren.

All this begs the question of how confident and secure a person Arie is, the fact that he is a race car driver notwithstanding.  He may have loved Becca, and he tried out an engagement with her for a few weeks, but at the end of the day, he was irrevocably drawn to the demure and frail Lauren.  Did Becca make him feel bad about himself? Is he a guy who really needs to be needed? A little of both?

What was truly shocking to me was not that Arie pulled the Mesnick switcheroo, but how he did it.  Becca showed up in Los Angeles, giddy about spending a weekend with her fiancé.  Then Arie arrived and lowered the boom. All of this was filmed by a crew with two cameras so that Bachelor Nation could watch it all play out via split screen, unedited.

Major drive-through penalty, dude.  How about offering a little privacy?  Any privacy?! I know that all parties signed up for this knowing their lives would be documented, but come on!  During the live post-mortem, Arie claimed he wanted all to see that the break-up was not Becca’s fault, that it was “on me.”  Whatever.

I was shocked that Becca wasn’t angry about that.  During the tearful ordeal, she never complained about being surrounded by a video crew as her heart was being pulled out of her chest ala Indiana Jones and the Temple of Doom.  My colleague Angie thought Becca should have broken the 4th wall with a “Can you believe this idiot?” look, ala Jim from The Office.

But classy to the end, she said she understood the terms and was fine with the public nature of the break-up.

I’m not letting Arie off so easy.  Just as bad as bringing in the cameras was his refusal to leave the premises!  After a few minutes, Becca told him to go.  He didn’t. She told him again, and again. Then he walked out the front door, leaving her crying in the bathroom, only to walk back in to find her!

Okay, maybe he cared about her and wanted to provide some comfort.  But my take was that he stuck around to make himself feel better. He was hoping she would let him off the hook in some way.  He wanted Lauren but he didn’t want to be the bad guy. As they sat on the couch she kept telling him to leave and he just kept sitting there.  Mercifully, but after way too many requests, he got his butt up the sofa and departed.

I know it’s not about me, but the whole finale just wore me out.  The two-parter went on way too long (5 hours worth?). ABC may be hurting for ad revenue, but isn’t there an adage about quality over quantity?  I have no one else to blame for that lost time. I’m a long time fan of this show, but the “raw and unedited” break-up scene may well have been the show finally jumping the shark.  I’m kind of done with it all.

At least, until May 28 when the limos arrive for Becca.