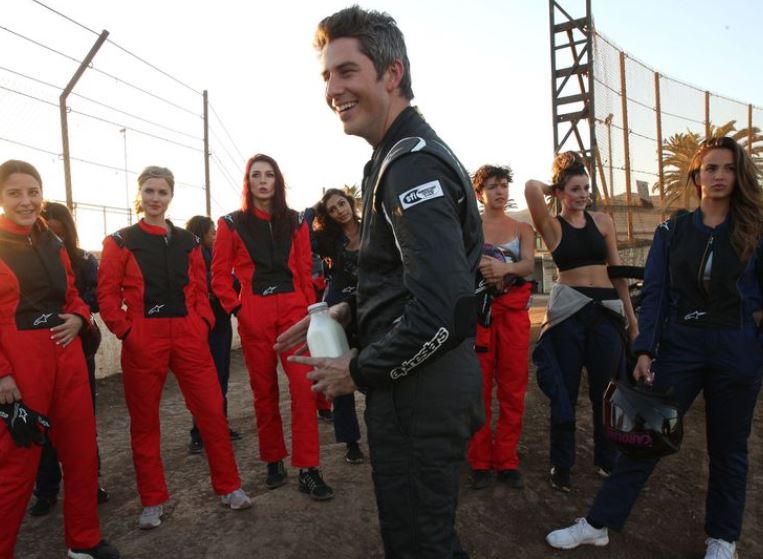 While most of America is stuck in record low winter temperatures, Monday night was hot on ABC with Arie Luyendyke as The Bachelor.

Arie is widely known for his kissing skills, and last night he got to work kissing a lot of the contestants. After 2 one-on-ones, Arie took 15 of the contestants to vent their frustrations by slamming into each other demolition derby style. It was fascinating to watch girls driving high speed-BACKWARDS-crashing into cars. The producers did a fantastic job of belittling Annaliese’s childhood bumper car trauma, so we were proud of her when she wiped her tears away and wreaked havoc on several of the cars.  We hope this exposure therapy freed of her bumper car phobia.  Brittany T., the winner of the derby came out the loser of the group date, as she had such bad whiplash she couldn’t participate in the party that night.

ABC should really think through their choices for group dates more carefully. All in all, it was a fun night of drama and Arie is proving to be more than just a good kisser.  He presented as a pretty solid, down to earth, kind guy last night.  Now for the category winners.

In case you missed Craig Pohlman’s run-down of last week’s season premiere, you can find the description of the category awards here.

One of the most entertaining moments of the night came just after the rose ceremony. Jenny’s ungraceful exit was a delight to witness.  Have we ever seen a contestant stomp off this upset so early in the season?  It is only the second rose ceremony after all, and her dramatic exit was Jenny’s only appearance in the show tonight.

From her statement, “I just got broken up with for the first time,” I think we can all conclude she must have fudged her age on the application for the show and is really a mere 15 years old.  It couldn’t be that she is just immature and after throwing a temper tantrum on national television wants to convince people that she is actually so irresistible no man has ever been able to refuse. Until now.  Sadly, she could have dodged this embarrassment bullet by politely leaving, but instead, she had to go and completely embarrass herself by not tolerating the rejection. Good for you for waving the black flag at her instead of the rose, Arie.

Krystal the smitten kitten gets the penalty for the night.  The obvious reason was that she stole Arie away twice during the cocktail ceremony from women who had not had any time with him yet.  Now that was bad, but we don’t think that penalty was the major offense.  The less obvious penalty was for making America cringe with her falsetto voice and statements like, “I just needed to feel our energy again tonight.”  This over the top dreamy act is going to wear Arie’s tires thin fast if she keeps it up.  If their relationship is going to go the distance like she hopes it does, we need to see (and hear) the real Krystal.

Bibiana.  The fangs came out tonight! Each time Bibiana was on camera she was fired up and raging about someone blocking her chances with Arie.  The bizarre twist is that for as worked up as she got about other women “stealing her man,” we never saw her even attempt to get some time with Arie.  Bibiana even called it quits during the group date, which shows us she doesn’t have what it takes to cross the finish line. Note to Bibiana: when you are one of 21 women dating the same guy, you can’t sit back and wait for him to come and find you.  You can’t win the race by sitting on the sidelines.

So just how well is Arie getting to know the women? This episode did not give us any glimpse into that.  Sadly, there are so many women to attune to, that even the one-on-one dates tonight didn’t offer up a whole lot of substance.

The clear frontrunner of this race to love after tonight’s episode is Bekah the Nanny. They have visible chemistry, that je ne sais quoi, you just see it and you know the connection is there and real.  It is effortless for Bekah and Arie, but we are not counting others out yet.  There are some quieter women who we think will start their rise to the top, and we can’t wait to see it all play out.

Marikh.  It is a shock that she was given a rose tonight.  Marikh showed her true self when she went for the jugular on Chelsea the Dominator  who had the audacity to (gasp) talk to him first.  Marikh is faintly reminiscent of Ashley I from Chris’s season, so get ready for drama if she is near. We think the way she was ready to rumble on the single mom and first impression rose recipient makes her a great candidate for the next Bachelor in Paradise or a spinoff of Jersey Shore.