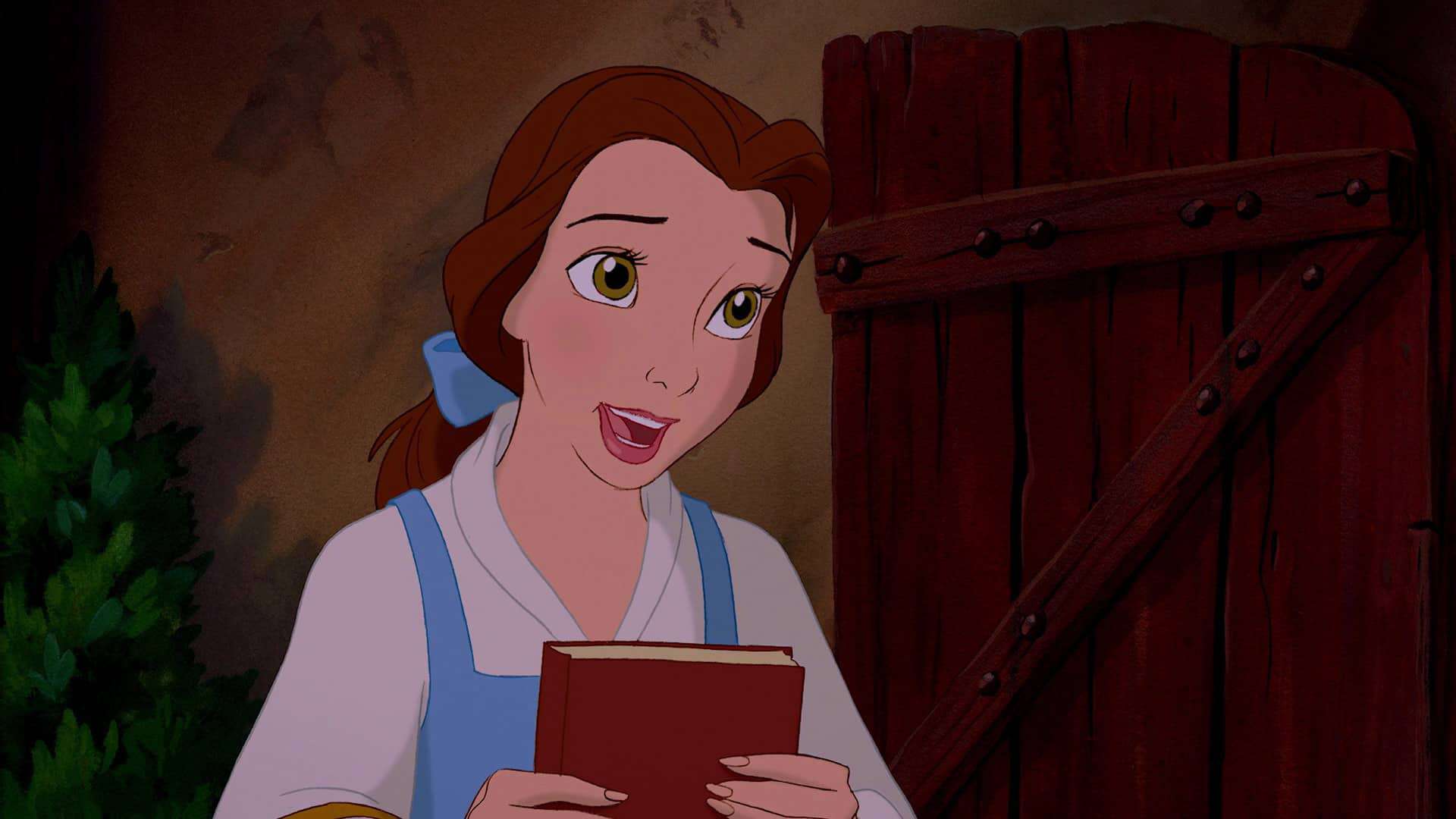 Belle is not just another cookie-cutter princess.  In anticipation of Disney’s live action remake, mental health professionals and a professional cosplayer reflect on the impact the original animated film had on their childhood.

“Look there she goes, that girl is strange, no question!
Dazed and distracted, can’t you tell?
Never part of any crowd
‘Cause her head’s up on some cloud.
No denying she’s a funny girl, that Belle.”

– Assorted villagers, “Belle” from Beauty and the Beast

“I want adventure in the great wide somewhere,
I want it more than I can tell.
And for once, it might be grand to have someone understand –
I want so much more than they’ve got planned…”

– Belle, “Belle (Reprise)” from Beauty and the Beast 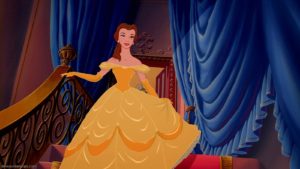 Disney’s Belle was unlike any of their previous heroines. She read voraciously, was willing to sacrifice herself to save her father, and just wasn’t interested in the handsome brunette man everyone else seemed to adore (seriously, Disney. Snow White’s Prince, then Prince Charming, then Prince Philip, then Prince Eric…). When she stood up for herself, it was not in defiance of her father’s wishes (we’re looking at you, Ariel). She believed in fairness, kindness, and never judged a book by its cover – she took time to sit with it, read, get to know it…you see where we’re going.

So what does this heroine mean to us at Shrink Tank? PLENTY.

When I was a child, I never really related to the princess films I saw.  They were films about these beautiful, popular girls that everyone loved having adventures.  They were entertaining but I never felt like I could relate to any of the women I saw in them.  I have always been a bit of a geeky girl.  I loved to read and was never happier than when I was discovering new books.  I saw “Beauty and the Beast” when it first released in 1991. I finally saw a Disney princess that I could relate to and seeing the film was a life-changing moment.  Here was a girl who was not popular and found her solace in books.  I was hooked into this story.  I memorized all the songs and watched the film over and over when it released on VHS.

After seeing the film, I started to find books that used the tale of Beauty and the Beast as inspiration.  My favorite Beauty and the Beast books are Fire Rose by Mercedes Lackey and Beauty: a Retelling of the Story of Beauty and the Beast by Robin McKinley.  The stories differed but the heroin was always the same; a mentally strong, intelligent woman who did not feel like fit into the world.  In each story she goes on a fantastical journey to find a place where she belongs (and that place always includes an amazing library). 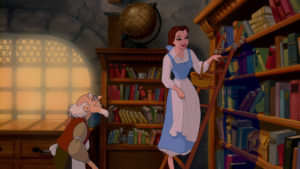 What Beauty and the Beast represented to me was a message of hope.  There is a place where you can fit in, where being a lover of books is not an oddity.  I will not tire of stories about girls finding their place in the world.  Now 26 years later I am looking forward to seeing a midnight showing of the live action Beauty and the Beast.  I am trying to avoid spoilers and hope to have my full review soon after the release.  My hopes are high for this next installment of my ongoing love of this story.

Do as I say and not as I do. This is a quip, a little phrase thrown around that gives people an excuse to act in a way that is not in line with their values. Sadly, when it comes to my self-esteem and self-worth, I sometimes apply this phrase to my own life. I cannot tell a lie. I don’t always see a “beauty” when I look in the mirror. The original animated Disney “Beauty and the Beast” came out in 1991 and I was almost thirteen and in the eighth grade. To say that I was awkward and generally struggling in the self-esteem department is putting it lightly.

At that time, my mother and I would always go and see the new Disney animated films that came out. We both loved to sing and dance and it gave us a shared experience which in turn provided a common ground for conversation that would not always easily come considering my stage of life. Belle was a different kind of princess and I recognized a strong connection to her character. Belle was bright and confident. She loved books and her family. She was fiercely loyal and had a strong moral compass. She could care less about being “in” with the popular girls and was actually unhappy when the “hot popular guy” set his sights on her. She knew better; she knew he was not for her nor did she want the life he was offering. We all know how the story goes and I left that theater wanting to permanently live in a beautiful yellow ball gown.

Fast forward 26 years. I am now happily married and the mother of two small children, one of which is a girl. My husband calls me Belle from “Beauty and the Beast,” as he sees me as the most beautiful woman in the world. He loves me for my intellect and feisty spirit. He also knows that deep down, I don’t see myself with the same kind eyes that he sees me from. He gave me that sweet name during a time in which he was not feeling so great about himself, hence enter the “beast” part, and he was grateful that “I picked him” in spite of his flaws. I see him as my handsome prince, and as all good loves stories go, we are living out our “happily ever after.”

On a different note, my beautiful blonde-haired, blue-eyed, daughter identifies with Cinderella, which at this point is based solely on appearance. I am okay with that. Heck, wouldn’t we all like a fairy godmother? But she calls me Belle; not because she hears my husband call me that but because of my dark hair. Again, she wants me to join her in her magical play, and wants me to have a princess of my own. Little does she know, if I could wave my own magic wand, that is exactly who I would pick.

I was 10 when I saw “me” for the first time in a character on-screen. She was a bibliophile who blew through works of fiction in a matter of a few short hours or days. She was different from the people around her. She was a daydreamer and an optimist and a caring heart…with a good head on her shoulders. Belle cared for her father – encouraged, loved, and supported Maurice after the passing of her mother. 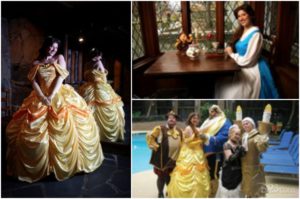 When I grew up, I wanted to have the same impact on the lives I touched as she had on those in her world…and so she was the first costume I made for cosplaying. The blue village dress, 2006. The ballgown followed in 2011.

Since then, I’ve read countless stories with children at schools, libraries, family nights, movies, conventions, and Make-a-Wish events. I’ve given presentations on the history of the fairytale and the costuming of the Broadway musical on behalf of the Blumenthal. I’ve even been shared by Jane Espenson, writer and executive producer for Once Upon a Time, and been honored to be a featured costumer on the costume blog, CosCouture, and the official Disney fan club, D23.

Belle has impacted my life more profoundly than I could have imagined. I have such high hopes for the live-action film, and I’m excited to see the impact Emma Watson’s new, strong, fiercely independent Belle has on children and adults alike!

Magical music, an enchanted rose, a ridiculously cool library, action, and adventure. These are a few of the reasons why I fell in love with the first film I remember from my childhood – “Beauty and the Beast.” My perspective on this classic fairy tale comes from the framework of a young child. I was only 4-years-old when the film was released, but this movie resonated with my childhood self, and Belle’s character has stayed with me over the years.

In my opinion, Belle helped lay the initial foundation for living a life in line with my values. That may sound corny or cheesy, but it’s true. From a young age, I loved to read and learn. I was the annoying kid who always asked “why?” when anyone said anything. So, when I first watched the film and learned that Belle loved books, I thought that she must like to learn like me. She must be smart, so clearly, I need to be like her.

Additionally, I was described as an adventurous child. I was always visiting some magical land in my imagination or on an expedition in my backyard. I had a passion for music and I sang constantly while playing. So, when Belle sang about feeling trapped by her small town I related in my own way. I thought about how I loved to sing, and how I wanted to see things in this world and go on my own adventures. Belle looked like a strong and courageous woman, and I decided I want to be like her when I grow up!

MORE ON BEAUTY AND THE BEAST