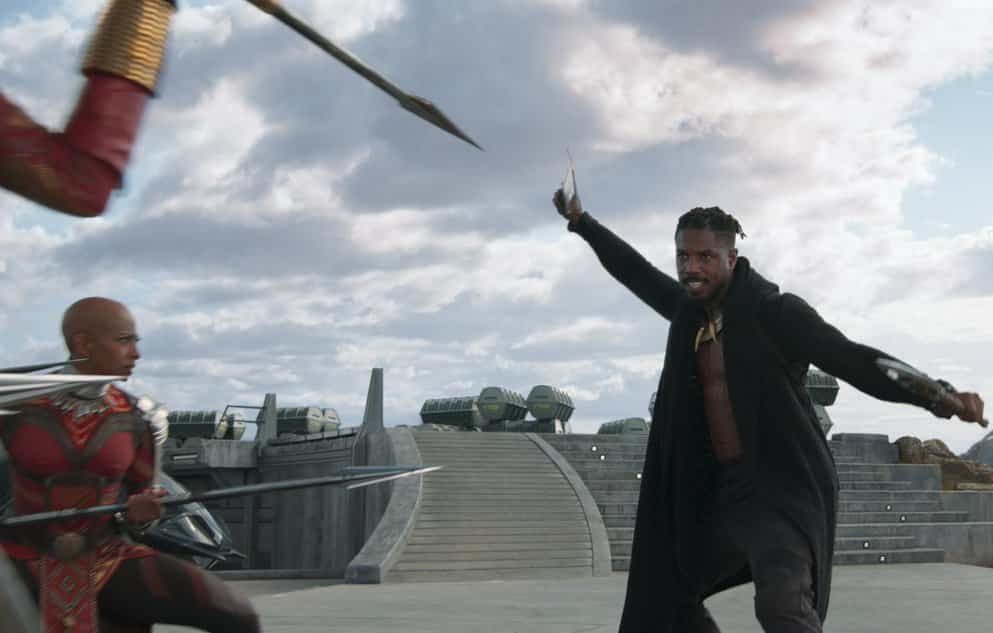 Erik Killmonger of Black Panther is one of the greatest movie villains of all time.

Black Panther’s antagonist is on a very short list with the likes of The Joker (The Dark Knight), Hannibal Lecter (The Silence of the Lambs), Alonzo Harris (Training Day) and Nurse Ratched (One Flew Over the Cuckoo’s Nest), Anton Chigurh (No Country for Old Men), Mr. Potter (It’s a Wonderful Life), and Alex Forrest (Fatal Attraction).

Black Panther is a triumph for many reasons.  A coalescence of talent, story, message, and context have propelled it to critical and commercial heights.  It is the rare film that simultaneously thrills, disconcerts, and inspires.

At its heart is the rivalry between T’Challa (Chadwick Boseman), the newly crowned king of Wakanda and eponymous hero, and Erik Killmonger (Michael B. Jordan), prodigal son bent on vengeance and violently upheaving the world order.  Heroes need strong villains to ascend to glory.  It’s the storytelling equivalent of Newtonian physics:  characters (not just actions) require equal and opposite characters.  But Killmonger is so much more than a foil.

T’Challa and Killmonger represent two paths to bringing the Third World in balance with the First World, to ending centuries of racial injustice on a global scale.  Director Ryan Coogler comes down on T’Challa’s side, which involves openness, generosity, and trust.  But Killmonger’s worldview gets full consideration.  That starts with understanding his origin story, including events that ravaged his childhood and shaped him as an adult.  After all, the political is personal.

Killmonger scores high on my Villainy Quotient, or VQ (see below).  But what will make him memorable is something that many great movie villains lack:  depth.  What made the Joker a sociopath?  We never learned for sure, since he kept making up answers on the fly.  It took a few rather lame sequels to get a peek into Lecter’s past.  What is Nurse Ratched’s background?  Why was Old Man Potter so greedy?  Was Anton born a sadist?  When did Alex come undone or Alonzo stray from the straight and narrow?

Jordan and Coogler pull the curtain back on Killmonger, so much so that it is possible to feel empathy for him, even sympathy, all the while cheering for his downfall.  His motivations are exposed and his soul is bared. The result is utterly Shakespearean.

Previously I described my Heroism Quotient (HQ) and VQ.  I rate villains along five factors (0-20), yielding a Villainy Quotient (VQ) with a maximum score of 100.  The factors are drawn from the thinking and research of Dr. Philip Zimbardo (of the Stanford prison experiment) and other experts on evil.  The higher the VQ, the more diabolical the villain.

So here’s how I score Killmonger:

Killmonger’s amorality was borne of his childhood when his father was ripped away and he was left to his own devices, without the kind of family support and guidance T’Challa received in Wakanda.  He will stop at nothing to achieve his ends, including playing the henchman for another nefarious heavy.  At a crucial moment, he dispatches a love interest without hesitation.  He initiates a first-strike military campaign with no concern about collateral damage.  He gets a very high 18 out of 20.

2. Degree of harm or damage done.

Killmonger steps up his rampage after seizing control of Wakanda.  One of his most destructive actions was ordering the burning of the heart-shaped herb garden, incinerating generations of tradition.  It was noteworthy that he did this after ingesting the herb took him to an astral plane where he interacted with the ghost of his father- one of the most poignant moments of the film.  If Killmonger’s military strikes had gotten off the ground, he would have an even higher score than 14 on this factor.

After revealing his true, royal identity and challenging T’Challa to the throne, Killmonger removes his shirt just before hand-to-hand combat.  His torso is covered with scars he gave himself, each representing a kill.  He explains that each of his many victims was a step towards the moment when he could claim the Wakandan throne.  That murderous track record merits a 19.

4. Malice towards victims, intent to cause suffering.

For all of this treachery, Killmonger does not come off as especially malicious.  To be sure, he wants to the First World to pay for its subjugation of the African diaspora.  But a deranged sense of militaristic honor would seem to hold him back from a more extreme score on this factor—10.

Killmonger is a striver.  He played the long game, spending years planning and training for his moment to seize power.  This kind of laser focus leaves little room for the distractions of sadism.  But there were clues that he enjoyed some of what he did, such as roaring triumphantly when defeating T’Challa (in Round 1) and soaking in the moment when he first sat on the throne.  So he gets an 11.

Sum up these factor scores and Killmonger’s VQ is 72.  I very much hope to see more of him on screen, though filmmakers will need to get creative to make this happen.  How about a prequel to his childhood, black ops career, and long-range planning of his coup?  I’d stand in line to see that movie.