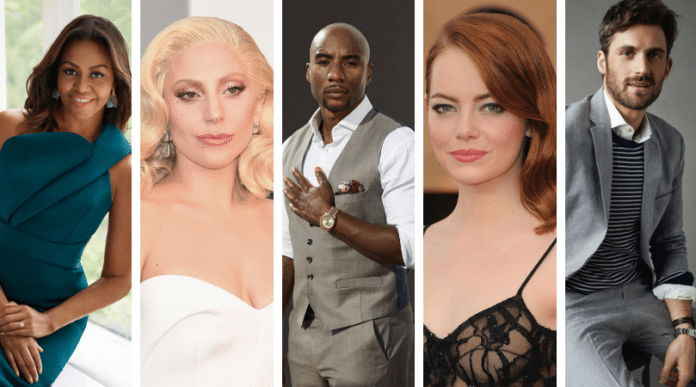 The Champion of Mental Health award is our annual contest that honors and recognizes celebrities that have used their platform to advocate for mental health. The nominees are carefully selected by our panel of psychology experts.

In the past year, we have seen several figures in pop culture talk more openly about their own mental health issues and the steps they have taken to overcome or manage their struggles. In doing so, they have given courage to many others who may have felt alone or haven’t known where to start in their own journeys.

After considering numerous candidates, the editorial board, which is made up mostly of psychologists and other licensed mental health professionals, narrowed the field down to five candidates for this year’s Champion of Mental Health.

To be nominated, a candidate had to have gone public with their personal connection to mental illness or traumatic experiences and have used their celebrity status for advocacy and awareness.

In other words, it wasn’t just about them sharing a struggle, but also steps they had taken—or were taking—to manage their mental health. Finally, they had to have some positive impact on the culture as a result of their public stand.

Here are the nominees for the 2018 Champion of Mental Health:

Former FLOTUS, Michelle Obama, has always been a strong advocate for de-stigmatizing mental health by encouraging people to have tough conversations and seek help. She is a champion of self-care and has consistently normalized and praised the strength and bravery of someone seeking therapy.

Over the years, she’s consistently referenced the impact of our mental health on our wellbeing through keynote speeches she gave or op-eds she wrote in. She also has preached the need to increase our ability to recognize indicators of challenges our loved ones might face.

Michelle Obama walks the walk as revealed in her recent memoir, Becoming, in which she discusses the couples therapy she and Barack went through as well as opening up about the pain around having a miscarriage and fertility issues. Her vulnerability and encouragement for others, particularly as a woman of color, make her a strong candidate for the 2018 Champion of Mental Health.

Lady Gaga has been vocal about her own struggles with mental illness, discussing her experience with PTSD and sexual assault in an interview with Vogue is the co-founder of the mental health-focused Born This Way Foundation.

He’s a brilliant radio, TV, and podcasting star, a New York Times bestselling author, and successful producer, but Charlamagne (born Lenard McKelvey in South Carolina) has proven himself to be a powerful voice in destigmatizing mental health treatment, especially in the black community. In his book Shook One: Anxiety Playing Tricks on Me, he talks openly about his struggles with anxiety and PTSD, as well as the steps he has taken to manage them.

Unfortunately, I think to have that conversation with him right now would not be productive and a total distraction from the point of the convo which is to eradicate the stigma of mental health especially in the black community.” For his openness, clarity, and advocacy, we nominate Charlamagne tha God as this year’s Champion of Mental Health.

Kevin Love is a 5-time NBA Allstar and NBA Champion with the Cleveland Cavaliers. He has spent most of his NBA career avoiding media members and the spotlight. After having a panic attack during an NBA game, Kevin became vocal about his struggles with anxiety, depression and grief. Kevin spent 2018 encouraging people to seek mental health treatment, by detailing his own journey with therapy and exploring issues he had tried to bury.

In September 2018, he launched the “Kevin Love Fund” to prioritize mental health. Through his advocacy and vulnerability, he has shed a light on the need for greater attention and care of mental health. Kevin is a well deserving nominee for our Mental Health Champion of 2018.

The Oscar-winning actress has been busy championing mental health awareness in 2018. She gave a candid interview about her anxiety with close friend Jennifer Lawrence that appeared in Elle. Stone also spoke about her anxiety as part of a panel hosted by the Child Mind Institute, a nonprofit dedicated to helping children and families struggling with mental health and learning disorders.

Stone shared that her motivation for speaking in detail about her struggle was a desire to help others.

These five great heroes have done tremendous good in advancing mental health acceptance and awareness. They have advocated for taking action, seeking treatment, and taking care of what matters.

Now, we want to hear from you!

Vote to help us determine who will be the 2018 Champion of Mental Health. It’s not a competition. It’s just an opportunity to put the spotlight on one of these awesome individuals and strengthen their message even further. We hope you’ll vote and tell your friends to vote, too. We’ll have the results in an upcoming article.