My first experimentation with marijuana was 25 years ago in the 8th grade when I was 14 years old.  I went to junior high in Charlotte, NC and pot was running rampant through all three grades.

White kids were selling it, black kids were selling it, and a lot of us were smoking it. I remember having the Drug Education pages marked in my Health book because the photo of weed delicately crumbled inside that bright white rolling paper excited me. I was seduced by the lyrics of the Grateful Dead, Jimi Hendrix, Bob Marley, Peter Tosh, and the Allman Brothers at that time…all known advocates of Mother Earth’s most effective herb. My first Grateful Dead concert was one year prior, in 1989, where I “smelled” second-hand pot smoke for a good 4 hours inside the Charlotte Coliseum…and then wore the same tie-dye the next day to show-off how much I “reeked of weed”.

As I entered 10th grade, public school basketball was taking over my life around the same time that rap was becoming more mainstream, so it was inevitable that I began to hear the messages that were rhymed on top of beat-heavy music delivered by my African American brethren. And then when Dr. Dre released his solo album titled “The Chronic”, in 1992? Forget about it.

The triple-platinum success of this album put a big green marijuana leaf in the hands of almost every kid in the country…and smoking it was propelled into the minds of all us.

The Weeknd’s famous song, “Can’t Feel My Face” moved its way to the #1 spot in the country a few months ago. Number 1 in the USA and #3 in the world…and it is about a love affair with cocaine.

“Antidote” by Travi$ Scott hit the Billboard Top 20 over the summer and it discusses weed, cocaine, pills, the FBI, and “young hoes” (old ones are a no-no). Billboard, which provides the standard rating lists behind music popularity and can make or break a group with a split decision, actually has a “Best Songs About Drugs” list. That seems crazy to me, but it probably shouldn’t.  As stated in the article, “drugs will always play a key role in human existence, because human existence will always be hard.  People use substances to escape reality.”

While I understand this and have even lived it, it scares me terribly. I have a 6-year-old daughter who loves music. My 11-year-old nephew smoothly side-mouths out the lyrics “I’m in love with the coco” in my back seat at the beach while we listen to satellite radio. He has no idea what it means, but I’m sure one of his 12 year-old-buddies will explain cocaine to him fully and accurately.

This is the reality behind how the current drug education curriculum is delivered in America. 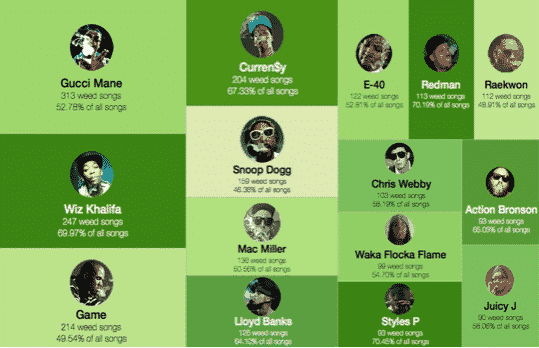 Some argue that songs depicting drugs in a negative light are sending the right messages, as opposed to glamorizing them. I think that makes them about as educational as my Health book. But when it comes to marijuana and rap, songs that discuss the struggle with it are few and far between. The outright braggadocios glamorization on the quantity, quality, and profits made from it is borderline comical.  See graphic above.  All but three of these 15 popular rappers have written more than half of their songs about weed.

This is two thousand two hundred and twenty-three individual tracks about marijuana that get played through most audio outlets at any time the listener chooses. Throw in reggae, ska, dub, roots-rock, stoner metal, psychedelic, trip-hop, screw music, and who knows what else…and you have millions of songs about marijuana accessible to almost anyone at any time.

For decades, you had to buy cassettes or CDs over a counter and show ID before listening to risky lyrics.  Now, you just have to have a warm thumb and functioning ears to find your way to a Top 20 song that tells you something like, “I got 5 on the weed, 50 on the drank / Fool I’m comin’ down, fuck what these hoes think / I wish I could come down but you know I can’t / Cause I’m leanin’ off the dank and the good ol’ drank”. Seems harmless…

You hear discussions surrounding the current state of our society and how the rise of technology and efficiency has created this culture of excess and immorality, but all of these songs about drugs simply remind me of  “Cocaine Blues” by Johnny Cash, “Casey Jones” and “Truckin” by the Grateful Dead, “Legalize It” by Peter Tosh, “My Michelle” by Guns and Roses, “White Lines” by Grandmaster Flash, and many other anthems from the past that referenced, glamorized, and/or demonized illicit drugs in their lyrics. The freedom of expression highlighting the use, selling of, and death from drugs is nothing new to music and is thought to represent the voice of the people.

The examination of lyrical influence is decades old and still doesn’t produce definitive statistical results, but usually, these studies aren’t conducted by actual people who have been through it. Drugs and the repercussions of being addicted to them have been voiced in popular music for generations providing the opportunity for complex and ongoing discussions surrounding cause and effect.

Is singing and rapping about drugs seemingly everywhere because our society is suffering and in need of an escape from the realities of terrorism, racism, poverty, murder, and corruption… and we are simply hearing about it through the expression of our popular spokespeople?

Or are we increasingly mirroring the fantastical lifestyle of the “famous” as a result of easier access to more influential music, newer and better drugs, and the “marketing” of these things by whoever profits from the sales of it all?  While this discussion is always interesting and both sides have endless references and stances, I would currently argue for the chicken and the egg. I think we have been beyond the point of eradication, as the answers are not embedded in history and how it all started. The answers are in how we progress with what we got.

We simply need to stay ahead of it and more importantly, effectively communicate the contrast behind what almost every kid listens to on their devices daily and what is actually happening in real life.

But as we know, the artists who are rapping and singing about marijuana are selling the heck out of their music and people love it. Our country has a fascination with Snoop Dog, Wiz Khalifa, Willie Nelson, and many others who have made smoking weed part of their appeal. The negative social perspective of marijuana and the threat of its long-term effects are changing.

People do not believe it is that bad for you anymore.  I am not sure why they have become more accepting of it but my guess is that it is a lesser of evils perspective. You hear things like: “It’s harmless”, “It’s from the Mother Earth”, “It makes me creative”, “I drive better on it because I pay more attention”, “Eating junk food on the couch is better than being out there fighting and killing”, “It’s not addictive”, “It’s isn’t cocaine or heroin”, “The taxation of it will make the country rich”, “People will stop killing over it if it is legal”, “It doesn’t even cause hangovers”, and “You can’t die from smoking it”.

These are the rationalizations you hear day in and day out from people who either smoke marijuana or have an agenda behind the sales and/or decriminalization of it. But all you have to do is dig into the Internet a little and you will see all the studies that have been done on the negative effects of marijuana abuse… and I am not giving any teenagers the green light just yet. 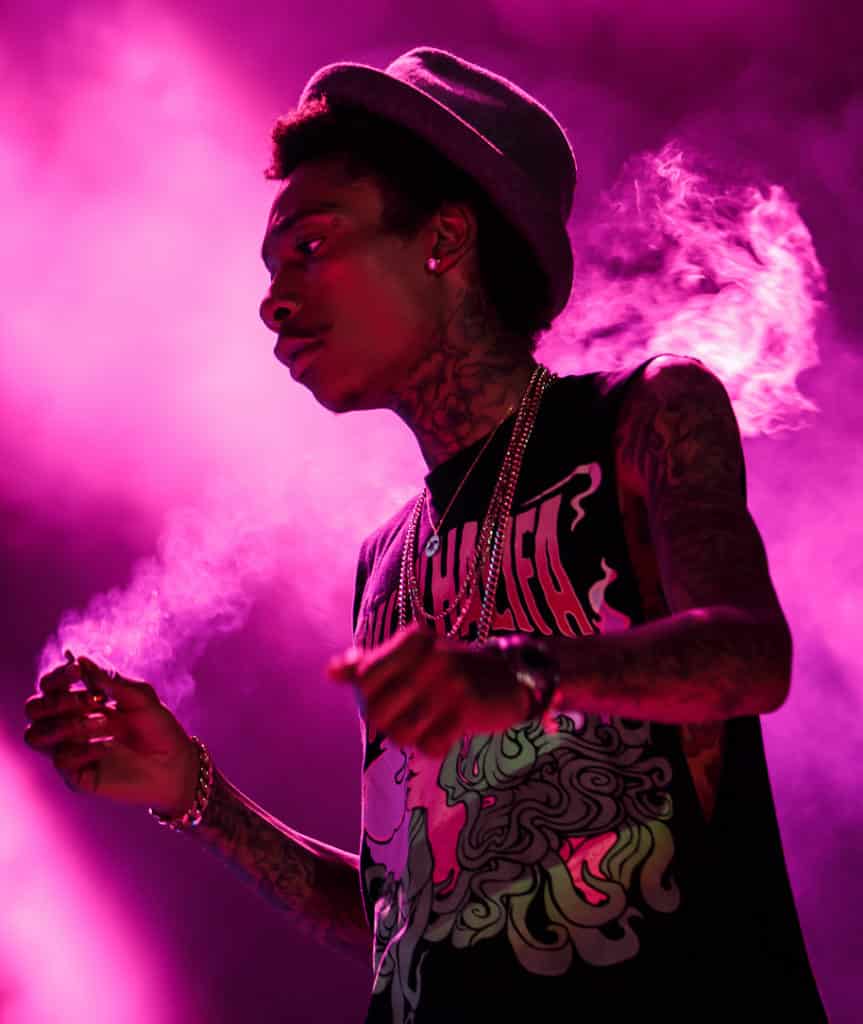 The truth behind the side effects of smoking marijuana on a consistent basis is much harsher than we are led to believe. My first hand experiences during and after years of smoking pot are: I couldn’t remember lots of little things like buckling my daughter’s seat belt and turning off the stove. I had great ideas about life and career, but I would only get excited about them and think they were brilliant…I would never actually do any of them. When I was high I was loving, caring, patient, and hilarious. When I was coming down I was angry, selfish, short-tempered, and dull. I was very anxious and suffered from panic attacks frequently.

I had insomnia because my mind would race and my senses were intensified. I could recognize the pattern in the “white noise” sound-bite of my noise machine and it drove me crazy. I was sick all the time with either a lung illness or head cold. I rarely wanted to have sex because I selfishly wanted to be totally comfortable and being physically intimate was too much pressure. I was very paranoid. When I woke up I was drowsy, sad, mean, and stupid until I smoked again…then I was perfect for about an hour. I had to read things over and over before I was able to comprehend them, as well as ask people to repeat themselves for me to understand.

Lastly, I could watch documentaries and read interesting information very well, and my mind would race with ideas and creativity. But that was all. Nothing ever happened.

So why are we becoming more and more OK with the prevalence of marijuana in our music?  Is it because we are so progressive that we are buying into the notion that it is harmless and perhaps fruitful?  Or is it because it has become so popular and mainstream that we can’t do anything about it other than accept and allow it? Or are we so corrupted that we are willing to turn our heads to the risks and make it legal for the financial profits it may bring? These are all intriguing stances and ones that we can debate until we are long in the tooth. But for people like me, the debate seems pointless.

American teenagers aren’t concerned with the debate. With lyrics like, “I’ve been to college, but to be truthfully frank, weed is knowledge because it makes me think”, we can rest assured that it will not change and every kid who is in touch with popular music is going to sing along. I am a substance abuse counselor whose passion is to help people who suffer from the powerlessness brought on by addiction and I still listen to music about weed. I saw Cypress Hill last month and the room was clouded with marijuana smoke. So what is the answer? Well, my answer doesn’t change.

My answer is current and continuously updated drug education for our youth and the most current treatment for the unfortunate people who are negatively affected by the most popular mind-altering substance in American music right now.