I knew very little about the film Coco going into my advanced screening.  I’m not sure if the marketing of this film has been scarcer than previous Pixar movies, but I had only seen one trailer for the film and it left me underwhelmed.  Nothing about Coco popped out of the teaser trailer.  I’ve also been underwhelmed with many of the recent Pixar releases. I’ve also worried that they lost their magic touch for original material in their sea of sequels.

I left the theater in a state of unbridled joy and enthusiasm.  Coco is Pixar’s best overall film since 2009’s Up.

I knew very little about Coco’s story, so I don’t want this write-up to spoil the fun for others.  The truth is, the less you know about the film, the more you will be delighted by its treasures.

Coco revolves around Miguel Rivera, a 12-year-old who dreams of becoming a musician. He and his family reside in a lively Mexican village.  Miguel comes from a family of shoemakers that may be the town’s only music-hating household. For generations, the Riveras have banned music because they believe they’ve been cursed by it.

Miguel accidentally enters the Land of the Dead and must navigate his way home with a little help from the souls of his own family.

Coco Is a Feast for the Eyes 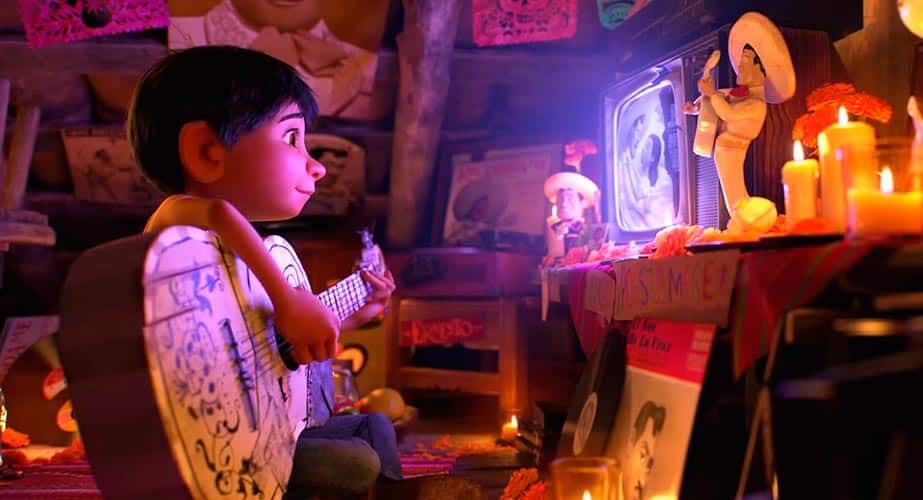 Coco is one of the most gorgeous and beautiful looking animated film … ever!  The vibrant colors presented at the Día de Los Muertos (Day of the Dead) celebration pop off the big screen.  And the Land of the Dead that Miguel visits is a true feast for the eyes.  The creativity and vibrancy of the Land of the Dead succeeds where the Personality Islands of Inside Out falls short.

There is depth and character in this otherworldly location.  My advanced screening was in 3D and I have to say, the 3D was subtle and sublime.  It did not draw attention to itself but complemented and enhanced the viewing experience.

Pixar’s reputation has been built on their amazing ability to craft remarkable films that transcend age and subject matter.  Why are Pixar films so successful?  If I had to distill the qualities down to the bare essentials, Pixar films successfully:

1. Tell a story that is both unique and universal

2. Develop characters the audience immediately fall in love with

3. Evoke honest emotions that are earned and not manipulated

4. Capture fundamental truths about the human experience that speaks to all generations

As a film experience, Coco nails all the essential Pixar qualities.  It is simply a great film.  I was initially concerned I would grow tired of skeletons as primary characters.  But somehow, Pixar was able to conjure fully fleshed characters out of mere bones.

Coco is Full of Pathos and Exuberance

It is a big risk to tackle a subject matter like Día de Los Muertos in a kid’s film.  The Day of the Dead could be a landmine for mockery and absurdity for those who look down on religion, or cultural traditions foreign to white, Anglo-Saxon Protestants. And yet, the creators handle the aspects of rituals, tradition, and the supernatural in a manner that is full of pathos and humor. The film is not overly reverent of religious beliefs and traditions but also avoids denigrating or dismissing such rituals and beliefs in the supernatural.

“I found Coco to be refreshing in how it employed the Day of the Dead not as a plot device but as a mechanism to spotlight larger truths about family, respect, remembrance, and forgiveness.”

Disney and Pixar have made earlier films tackling the themes of culture, traditions, and generational divides.  Both Brave and Princess and the Frog are two examples of adequate films.  Moana was more successful as a fully formed film.  But the movie I believe has the most parallels to Coco is Studio Ghibli’s Spirited Away. Like Coco, Hayao Miyazaki’s 2001 Academy Award-winning film is a feast for the eyes and a unique journey into a supernatural world.

Where Does Coco Rank Amongst the Great Pixar Films?

Coco receives a solid A+ grade.  But where does it rank in the great pantheon of Pixar pictures?  Without falling victim to prisoner of the moment, I want to watch the film again to see how it holds up to repeated viewings.  But I wouldn’t be surprised if Coco squeezes in my Top 5 of all-time greatest Pixar films.