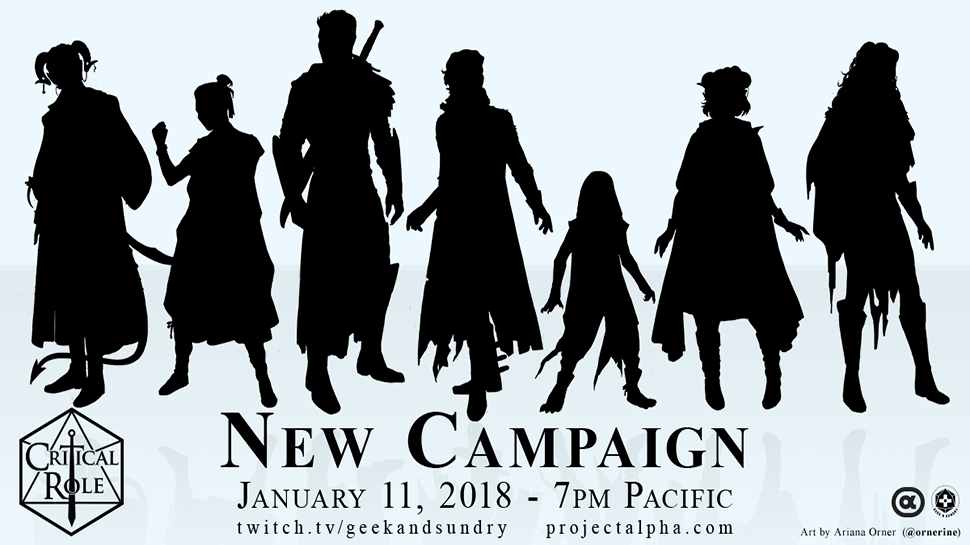 On October 12th, 2017, critters witnessed the ending of the story of Vox Machina on Geek and Sundry’s hit show, Critical Role. Critical Role, for those not familiar with the show, is a live game of Dungeons and Dragons (D&D) played by a group of voice actors. They play almost every week for three to four hours at a time. In the almost three years the show has been on they have aired over 370 hours of original content (for the sake of comparison, The Simpsons has made just over 200 hours over the past 27 years). This past week the fans got their first glimpse of the new campaign of Critical Role which included a new opening to the show.

Perhaps one of the greatest things about Critical Role is the community that has sprung up around it. Fans of the show (known as critters) are artists, dungeon masters, musicians, statistical nerds, psychologists among other things. Over the course of the two year Vox Machina campaign, critter artists created enough fan art that an official art book was released in 2017 filled with hundreds of drawings from various artists in the community.

Change can often be difficult, and with a new campaign starting some might have worried that critters would not welcome the new characters. Such worries were unfounded. Over 90,000 viewers watched Critical Role live on Twitch.TV with more on Geek and Sundry’s subscription service, Alpha.

In less than a week, hundreds of pieces of fan art have been created, with some critters even starting to cosplay as the new characters. The fans and the cast seem to be experiencing delight in the new campaign.

Personally, I love the art that has captured the characters from the previous campaign welcoming in the new characters, such as this piece:

Too often, the internet can be a place where people are cruel to one another.

The critter community is a great exception. Critters are a fun, creative, passionate, and supportive community. Critters encourage one another to create fan art, fan fiction, cosplay and start games of their own. In part because of shows like Critical Role, D&D has seen a resurgence in recent years with 2017 being the most profitable year ever for D&D. In my opinion, more D&D is a very good thing.

Chris Perkins, lead designer for Wizards of the Coast—the company that makes the official D&D books and campaigns—has said that he believes the world would be a better place if everyone played D&D. I agree with this belief.

One thing I have witnessed in therapy is the healing power of creation. Many who struggle with psychological problems find creation of all kinds to be incredibly healing and therapeutic. Further, being a part of an active and supportive community can also be very helpful.

Playing D&D allows one to spend quality time with friends, engage in creative endeavors and be a part of a story where they get to be the main character. Therapists all over the country are utilizing the healing power of D&D by creating therapy groups that use D&D as a therapy tool. We are even seeing new research that is showing that being an engaged viewer of shows such as Critical Role can also carry some of the same psychological benefits as playing.

If you have not yet gotten into Critical Role, now is a great time to join the critter community. Last week’s episode is available for viewing on Geek and Sundry’s webpage, or in podcast form starting Thursday the 18th of January 2018. As we learn more about the new characters, I will write about them. For now let us welcome Caleb, Nott, Jester, Beauregard, Fjord, Mollymauk and Yasha.

I can’t wait to see more of your adventures together.

There is so much more amazing art that has been created around this show. To view some of it search #CriticalRoleArt on Twitter.

Crazy Together: Shared Trauma is the Heart of Stranger Things 2