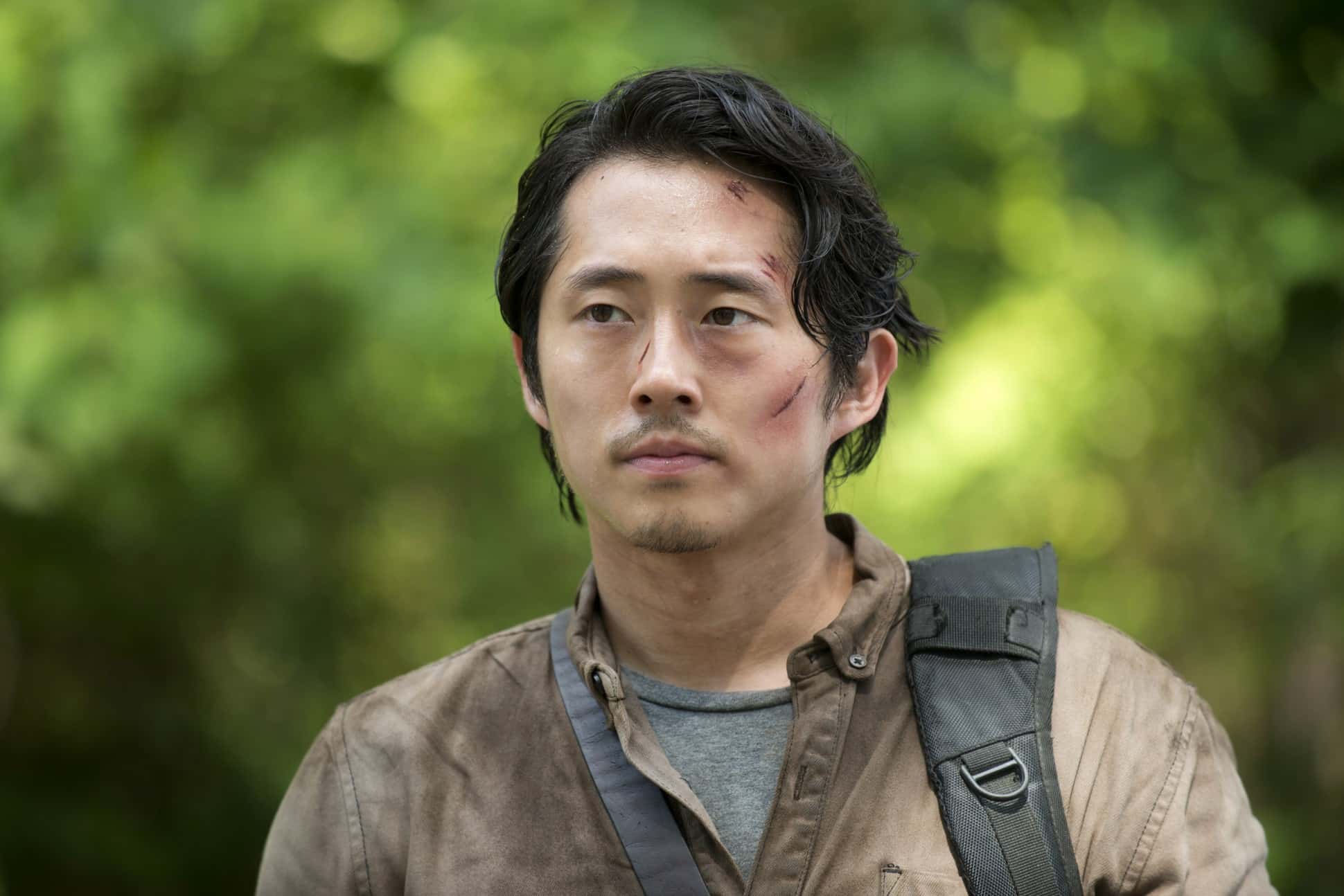 Negan has arrived.  Someone will die in tonight’s season premiere by his hands (or bat).  Will Glenn survive, or has he met his brutal and tragic end?

[The following article has been updated from its first publication published on October 9, 2015] 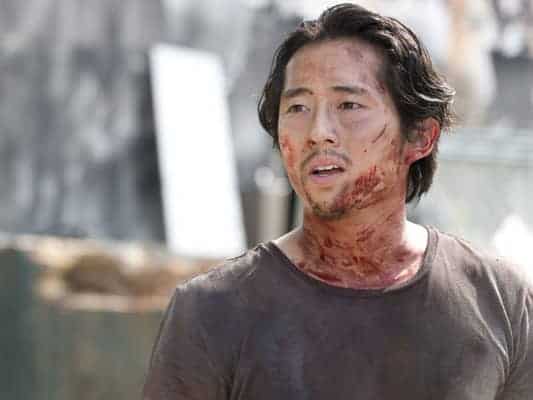 Every new season of AMC’s The Walking Dead brings the inevitable question, “Which of the major characters do you think will die this season?”  Last year the focus revolved around Steven Yeun’s character, Glenn Rhee.  Yeun’s Glenn is still not safe as the seventh season kicks off tonight. 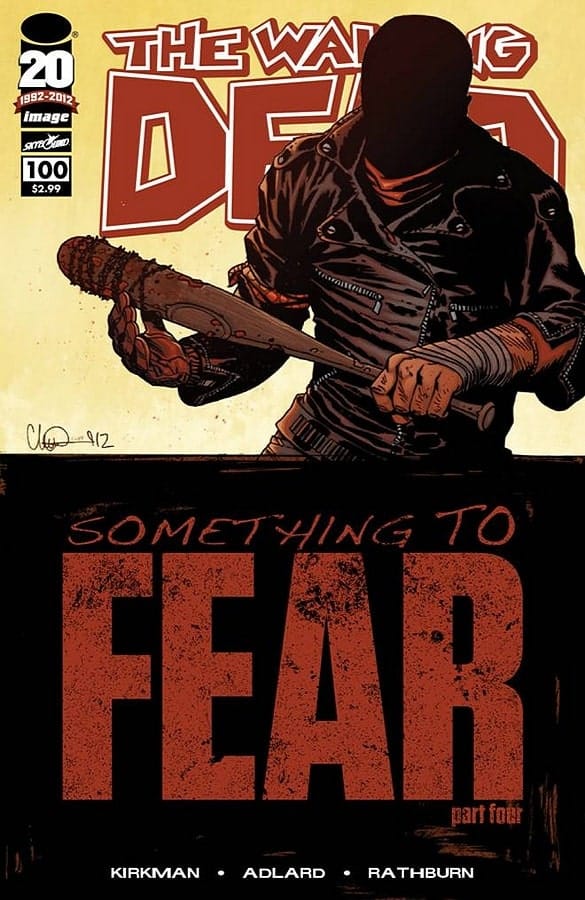 Glenn’s overall fate in The Walking Dead universe is well known for those who are familiar with Robert Kirkman’s original comic book series.   In the iconic 100th issue of the comic book, Negan, one of the more infamous villains of The Walking Dead, makes his debut in a shocking and unforgettable fashion.  Negan announces his presence by driving his trusty baseball named Lucille through Glenn’s head.  Glenn’s violent demise at the hands of Negan only reinforced in the comic series that no character, even major franchise characters, is safe.

Negan, one of the more infamous villains of The Walking Dead, makes his debut in a shocking and unforgettable fashion.  Negan announces his presence by driving his trusty baseball named Lucille through Glenn’s head.  Glenn’s violent demise at the hands of Negan only reinforced in the comic series that no character, even major franchise characters, is safe.

The inevitable question I ask myself each new season of The Walking Dead isn’t “Which of the major characters do you think will die this season?”  No, the question I’ve asked myself the last couple of seasons was “Is this the season Glenn dies?”  His death has already occurred in the comic book universe and thus casts an ominous shadow over the show. 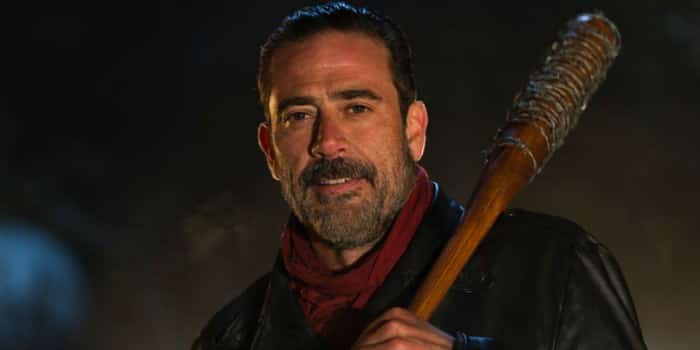 Another reason I am growing more and more fixated on Glenn Rhee’s fate is that the showrunners have been teasing the audience about Glenn’s ultimate fate laid out in the comic book’s universe.  Season 5’s premiere had Glenn tied up at Terminus and about to get his head taken out by a bat.  Later, during its midseason premiere episode, Glenn was walking about with a Louisville Slugger baseball bat.

And then Season 6 of The Walking Dead arrived and brought the show’s timeline closer and closer to events featured in Issue 100 of the comics.  We knew Negan had been cast and his appearance loomed over the entire season.  But the showrunners brutalized Walking Dead fans with last year’s episode, “Thank You,” which depicted Glenn’s graphic demise not at the hands of Negan but by a horde of Walkers.  Or so we thought.  Turns out that it wasn’t Glenn’s innards that the Walkers were feasting on, and he lived to fight another day.  That is, until he and most of the major characters collided with Negan and his crew in the season finale.  The audience was left in suspense at the sound of Negan’s notorious bat, Lucille, disposing of one of our beloved characters.  But who died?

I know it’s too late, but I still have to implore –  Dear Robert Kirkman, AMC, the writers and showrunners of The Walking Dead.  Please Don’t Kill Glenn.  He’s the first television character to ever remind me of me.

Growing up an adopted Korean:

I was born in Seoul, South Korea but was adopted and moved to the United States before my first birthday.  I grew up in the wonderful state of Washington, with Caucasian parents who had two daughters from natural birth.  I have an older brother who is also an adopted Korean, but we are not related by blood.  Growing up, I was given every opportunity by my mother to learn and connect with my heritage and cultural background, but I never was that particularly interested.  My family wasn’t Korean.  The majority of my friends growing up weren’t Asian.  I married a wonderful woman with curly red hair and freckles.  I didn’t deny my ethnicity but I certainly wasn’t defined by it, nor the stereotypes that inevitably accompany it.  I do not pretend to speak on behalf of anyone else but me.  When I look in the mirror, I don’t see an adopted Korean.  I just see me.

The reason I share that with you is because it helps explain why I connect with the character of Glenn Rhee on such a deep and personal level.  I don’t love the character of Glenn because he’s Asian (although that wouldn’t be a bad reason).  No, I love and care about Glenn for two major reasons.  First, he’s a fully realized character.  He’s crucial to the story and crucial to the show.  He’s three dimensional.  He’s funny but not a comedic sidekick.  He’s flawed but also heroic and dependable.  He gets the prettiest girl and has grown as the series has progressed.  That’s the primary reason I love Glenn’s character.  The second reason I love Glenn, and the reason that he reminds me of me, is that he’s not an Asian character on a television show.  He’s a character who happens to be Asian.  His race and ethnicity is not denied or downplayed, but it’s also not what defines him.  It’s barely even acknowledged.  And by doing so, the show has avoided the standard and wornout tropes that often befall the representation of Asian characters in television and film. 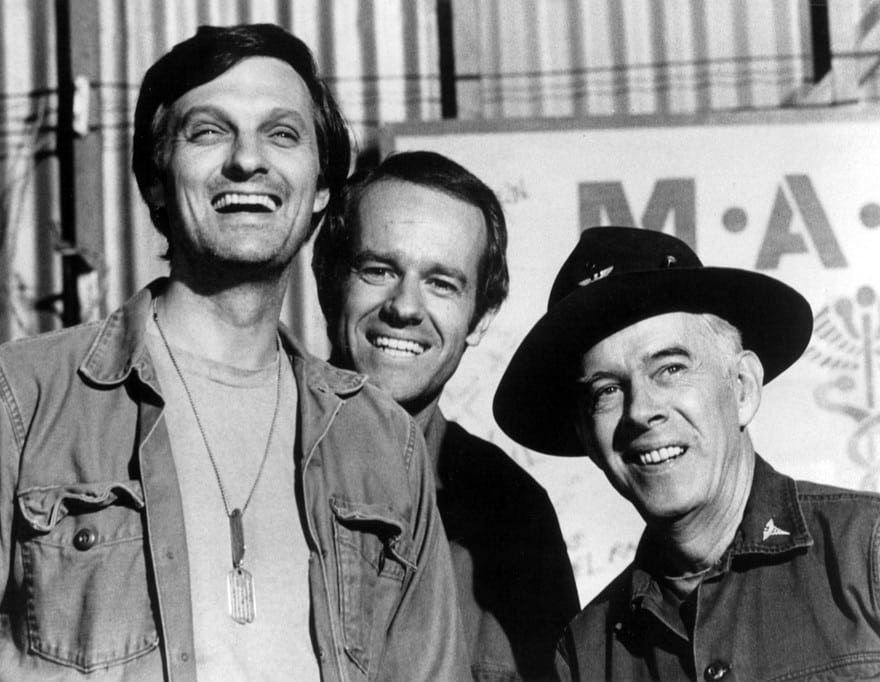 I’m not a crusader.  I haven’t followed or tagged all of the Asian characters that have appeared in film or television over the years.  I just know what has left an impression on me.  And my first impression of Korean culture and heritage didn’t come from my family, it came from the television show M.A.S.H.  That was my favorite show as a child.  I think I still have a kindergarten worksheet where I answered several questions to help the teacher get to know me.  Guess what I put down as my favorite television show?  Yup, M.A.S.H.  I wonder how my teacher reacted to a 5 year-old Korean boy listing a comedic show about the Korean War being his favorite show.  Lots to unpack there.

I think M.A.S.H. probably did as good a job as possible to respect the Korean backdrop and country while focusing exclusively on the Caucasian protagonists.  The surreal aspect of watching M.A.S.H. is that I didn’t identify or relate to the Korean characters.  I identified with Hawkeye, Alan Alda’s character.  He was funny and sarcastic but humane and skilled as a surgeon.  His humor and humanity is what I wanted to succeed at in life.

Growing up in the 80’s, pop culture wasn’t kind in its representation of Asian characters in mainstream film, the only films I had any access to or awareness of.  Two actors in particular loom large over my pop culture upbringing; Jonathan Ke Quan and Gedde Watanabe. 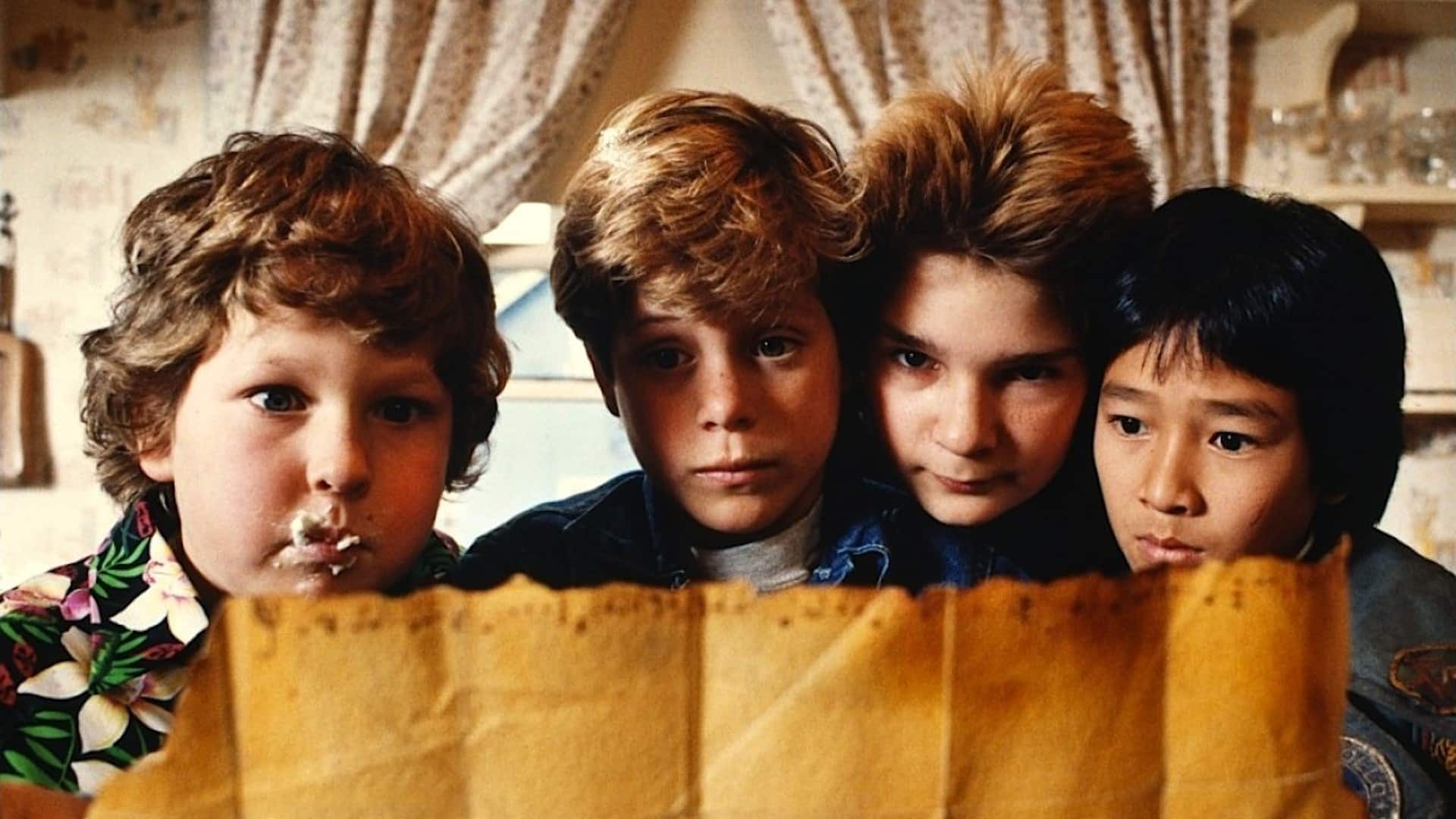 Jonathan Ke Quan is known for two unforgettable roles; Shortround in Indiana Jones and the Temple of Doom and Richard ‘Data’ Wang in Goonies.  Each character is ripe with stereotypes I’ve had to live down over the years.  The biggest offense is that their English is heavily accented to the point where their pronunciation of words is repeatedly used for comedic effect.  ‘Data’ in particular speaks in such a heavily accented English that his friends have difficulty understanding him, which forces him to constantly repeat his words.  Growing up, I encountered numerous people that wanted me to be “Asian funny”.  Not just funny, but “Asian funny” – the type of humor that isn’t evoked from wit or humor or cleverness.  No, I encountered people who wanted me to speak in such broken English that the joke wasn’t in what I said but how I said it. 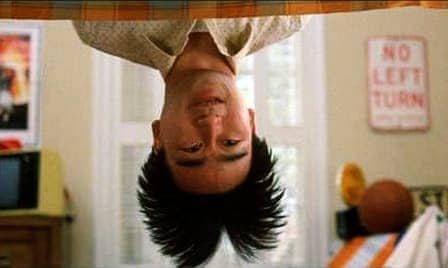 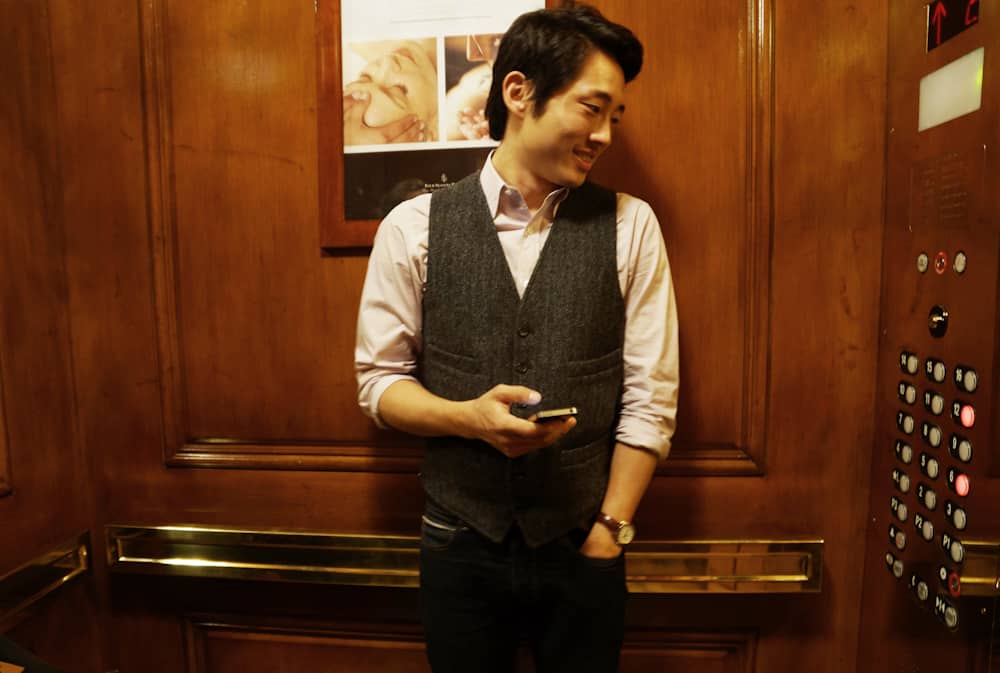 Why Glenn is a Refreshing Character
Having grown up in a time when Asian characters were immensely stereotyped in television and film, coming across Steven Yeun’s Glenn Rhee was a revelation.  His character completely subverts the Asian sidekick caricature.  First off, his name is racially neutral.  Glenn doesn’t immediately connote Asian heritage.  Second, he’s not a technology geek or science genius (or violin player).  He’s a pizza delivery guy.  Third, he doesn’t possess crazy kung fu fighting skills.  Fourth, his character is not marginalized or brought in for punchlines.

He is an integral character of the show and his story arc has only grown as the series continued.  Fifth and most important, all the other characters in The Walking Dead world do not define him or treat him differently as a result of his ethnicity.  They see him first and foremost as a human being.  In Season 2, Glenn found love with Maggie Green (Lauren Cohen).  Maggie is a southern, country girl who falls in love with Glenn because he is a decent, brave, and caring person.  That’s description goes right to the heart of Glenn Rhee and why many people have fallen in love with him as a television character.  When Maggie’s father Hershel Green (Scott Wilson) learns of his daughter’s affection for him, Hershel makes absolutely no objection or mention of Glenn’s ethnicity.  To him, Glenn is a decent man who loves his daughter and will look out for her in a dangerous and unpredictable world.  Did I mentioned that I fell in love and married a white, southern girl?  Yup, I’m actually Glenn Rhee in real life. Booyah! 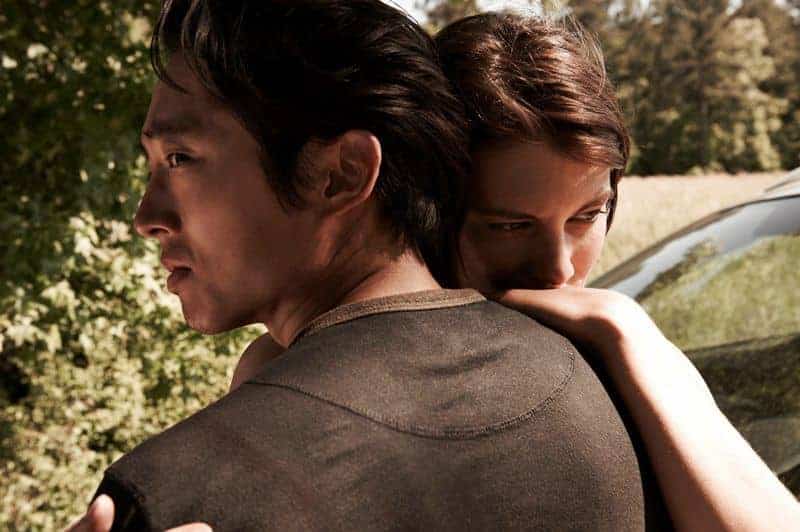 Those are just a few of the reasons why I identify so strongly with Glenn on The Walking Dead.  I’m always cognizant of my ethnicity and race.  But I’ve never asked to be or wanted to be defined by it, certainly not marginalized or limited because of it.  I respect and can understand why others feel such a deep connection with their cultural and racial background.  As an adopted child raised by a Caucasian family in America, I don’t feel that way.  And right now, it feels like Glenn is the only Asian character on television who doesn’t inhabit an Asian family or world. 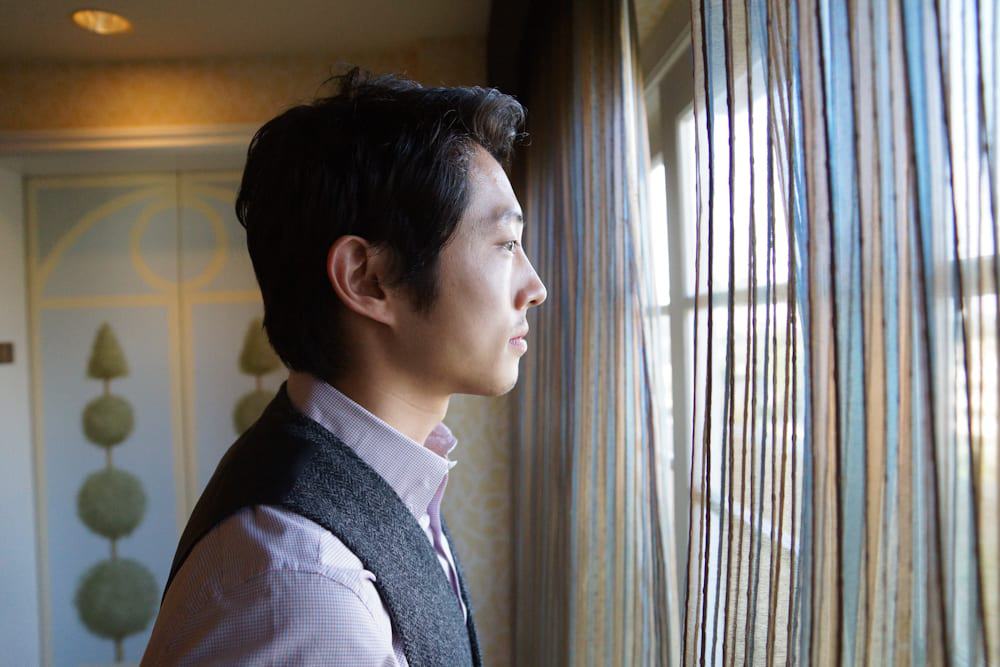 But I’m in a bind.  You see, I desperately want Glenn to survive and fight on.  I want to live vicariously through him on The Walking Dead.  If lazy, ignorant, or just plain prejudice people are to stereotype me, I want them to hold me up next to Glenn Rhee and not ‘Data’ or Long Duk Dong.  I don’t want Glenn to die.

But I don’t want Glenn spared just because he’s Asian.  I want his character to be held by the same rules that govern The Walking Dead world, namely that “No one is safe!”  If he is spared simply because he’s the only Asian on the show, I feel like that would undermine all the progress and advancement that Glenn represents.  I am torn and conflicted.  That’s what watching The Walking Dead will do to you.

The Walking Dead returns tonight at 9 PM Eastern on AMC.

A Psychologist’s Take on Why We Love The Walking Dead…

Predict Who Dies on the Walking Dead Finale (Poll)