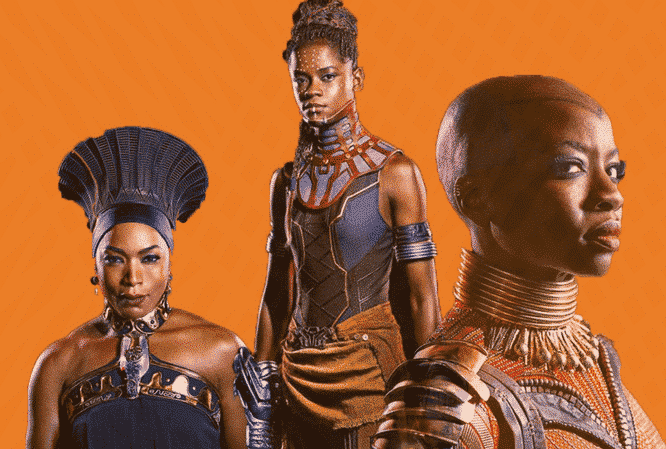 Black Panther is one of many superhero flicks that is allowing audiences to see a world opening for strong, capable, intelligent women to be represented in big-budget, blockbuster films.

We grew up loving movies, superheroes, and reading comic books, but so many of the stories we read about were male-driven, male-centered, and male-focused. When those heroes started hitting the big screen, we watched eagerly for butt-kicking, strong, empowered women to appear…and got a lot of love interests instead.

In more recent comic book movies, however, we’ve gotten figures like Black Widow in the Avengers films, and Gamora and Nebula in Guardians of the Galaxy, and Wonder Woman. With the Wonder Woman film, we felt the time for females to shine was truly beginning. We started to see a world opening for strong, capable, intelligent women to be represented in big-budget, blockbuster films. 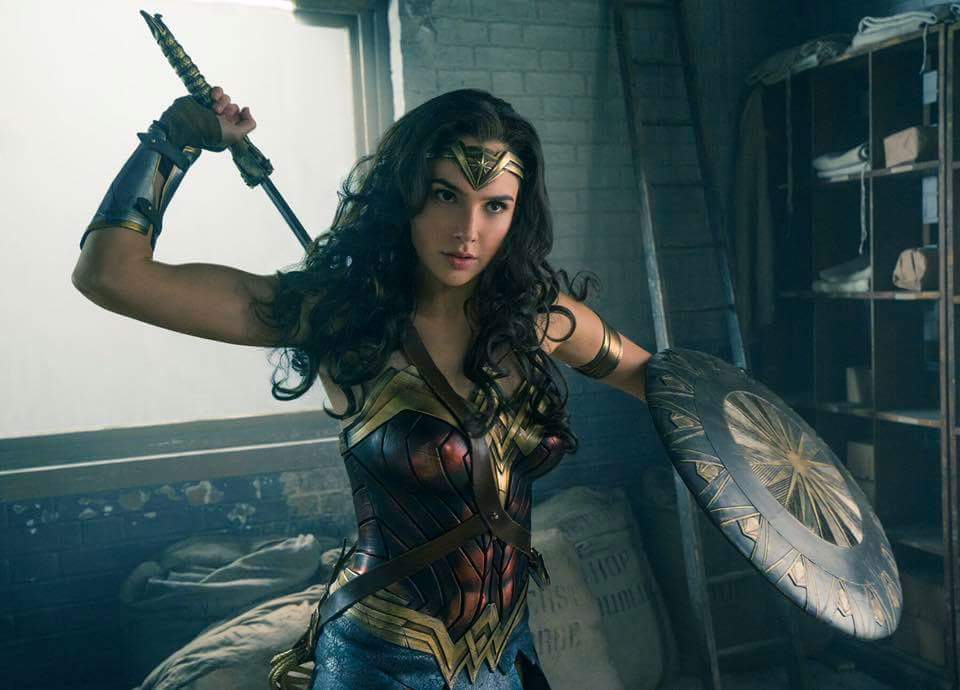 Historically, a vast number of female characters within film have frequently fallen into two specific archetypes. The first character archetype is the Love Interest/Damsel in Distress.

She appears as a way of inspiring the hero, as someone to be used as a pawn in the villain’s scheme, or as a “reward” for his saving the day. Often, the male hero experiences conflict when torn between saving the world/others or his love interest, the damsel in distress. This representation can be seen in multiple movies. For example, in Christopher Nolan’s The Dark Night, Batman was forced to choose between saving Harvey Dent (the new District Attorney who inspired hope in the crime riddle Gotham City) or his childhood sweetheart Rachel Dawes.

Another example comes from the 2002 Spider-Man, where a choice had to be made between saving Mary Jane Watson (his high school crush/girl next door) or a tram car full of school children. In any Superman film from George Reeve to Henry Cavill, if Lois Lane is there, she’s in danger. She’s got to be the most threatened woman in superhero film history! And Superman has to find the way to save both the world AND Lois.

A second archetype involves the manipulative villainess. This female portrayal typically results in the use of the body to manipulate male characters and to gain power. Taking examples from so many slinky-costumed, sex-charged Bond villains, we get figures like Uma Thurman’s Poison Ivy from Batman & Robin, whose first act as Ivy was to use her new-found sex appeal to bestow a toxic kiss on her murderer, or like Michelle Pfeiffer’s Catwoman from the 1992 Batman Returns, wearing a latex suit that was so tight that she felt trapped and restricted inside of it. And heaven forbid if she needed to use the litter box! 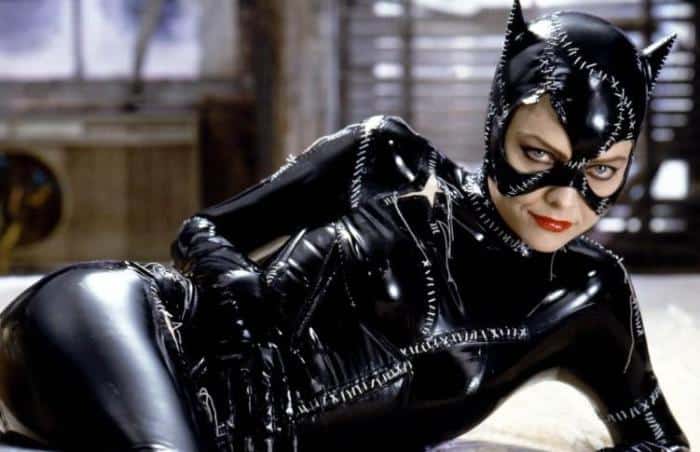 As seen with the villainess, females roles typically involve sexuality. The objectification of women’s bodies with the slow pan up from the 6-inch stiletto heels all the way to the bright red lipstick and wind-swept hair is far too common. However, we are thankfully moving towards less sexualized representations of resilient females in film. Wonder Woman and Black Panther are two films that have come out within the last year that are incredible examples.

The women in these films are portrayed to be strong and powerful, simply because they are. The Amazons of Themyscira in Wonder Woman, not just Diana, are incredibly physical, and we see their training methods, their fighting style, and their preparedness. They are always ready to fight, should they need to.

When the Germans storm the island’s beaches, we see beautifully choreographed fights, with emphasis on showcasing as many practical effects and stunts as possible. We see a well-oiled machine, an incredible, believable, powerful army of warrior women, with no one seeking glory, and everyone working to fight off the enemy and to protect their Sister Amazons. THIS. The first 20 or so minutes of the film, was what we’d waited for our entire lives.

And now? Black Panther has given us brilliant, tactical, science-minded, strong women of color in the Dora Milaje and the women closest to T’Challa. The men of the film are the source of conflict…T’Chaka’s legacy for T’Challa, T’Challa’s struggle to find what kind of king he will now be, Ulysses Klaue’s role in smuggling vibranium and the murder of the former king, Eric “Killmonger” Stevens seeking to right wrongs done to his family and to black people throughout history, and tensions among the tribes of Wakanda about what the nation’s future should be.

The women of the film, on the other hand, are the reason that the story advances and they pave the way for T’Challa and Wakanda to thrive.

At the beginning of the film, we see Nakia in her role as a War Dog (agent and spy) for Wakanda, undercover and on a secret mission to rescue Nigerian girls.  She’s strong, brave, and willing to risk her life to protect others. Throughout the story, Nakia proves herself to be fierce and forward-thinking; saving some of the Heart-Shaped Herb meant that Wakanda would be able to preserve the legacy of the Black Panther.

Nakia refuses to sit still and watch; she’s even developed a reputation as trouble wherever she goes because she leaps into action to get things done.  She wants Wakanda to look beyond just sending its War Dogs out into the world…she wants her country to do as she does, and act, saying, “Wakanda is strong enough to protect itself and help others.” 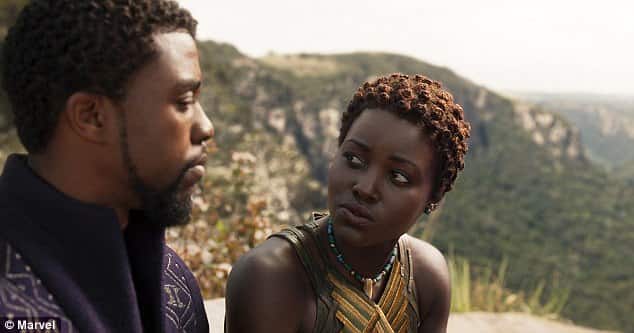 Nakia: I would make a great Queen because I am stubborn…if that was what I wanted.

Ramonda, the Queen Mother, is warm, loving, and incredibly collected for a woman who’d lost her husband during the attack on the UN in Captain America: Civil War, a mere week before this story is set. She is one of a trio of women who go into exile in order to protect the throne, with her love for T’Challa, Shuri, and Wakanda blazing the trail. 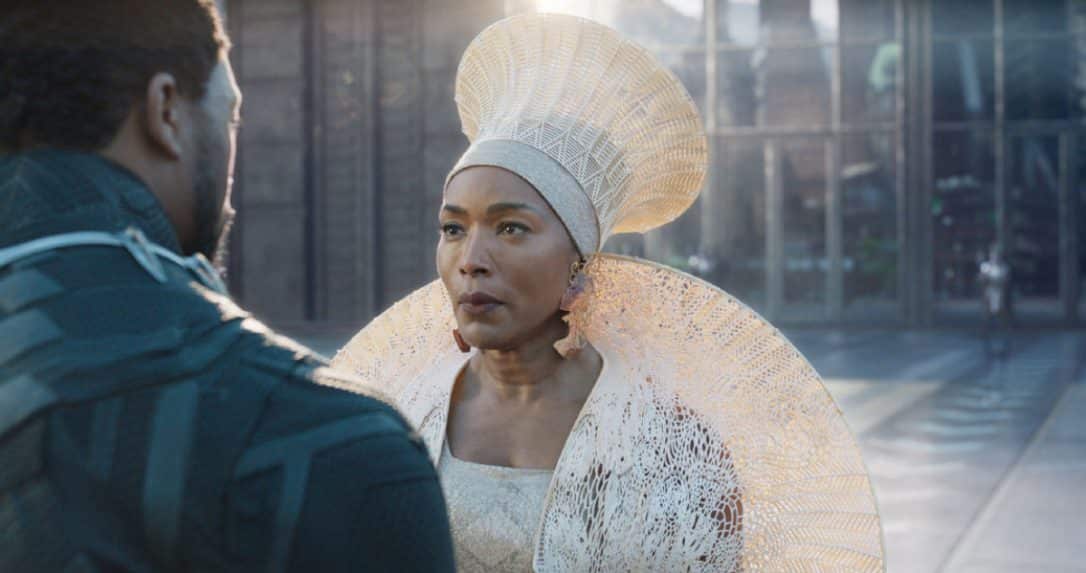 Ramonda: My son, it is your time.

Speaking of T’Challa’s sister, Shuri may be one of the best characters to come out of Black Panther and an incredibly heroic figure in her own right.

She’s not just any old princess…Shuri ranks among the most intelligent and technologically-minded characters we’ve seen in a Marvel film, with a quick wit and snark, so watch out, Tony Stark! We’ve got a feeling she’s going to run circles around him in this summer’s Avengers: Infinity War.  She’s unafraid to express herself and unapologetic in her confidence, queen of the one-liners, and this film’s standout.  Her use of vibranium in her tech is revolutionary, and she’s continually innovating with one of our favorite quotes from the film, “Just because something works doesn’t mean it can’t be improved.”  You’re not wrong, Shuri – we’ve been loving Marvel’s films for a decade now, but Black Panther is the next step forward, improving on the formula. 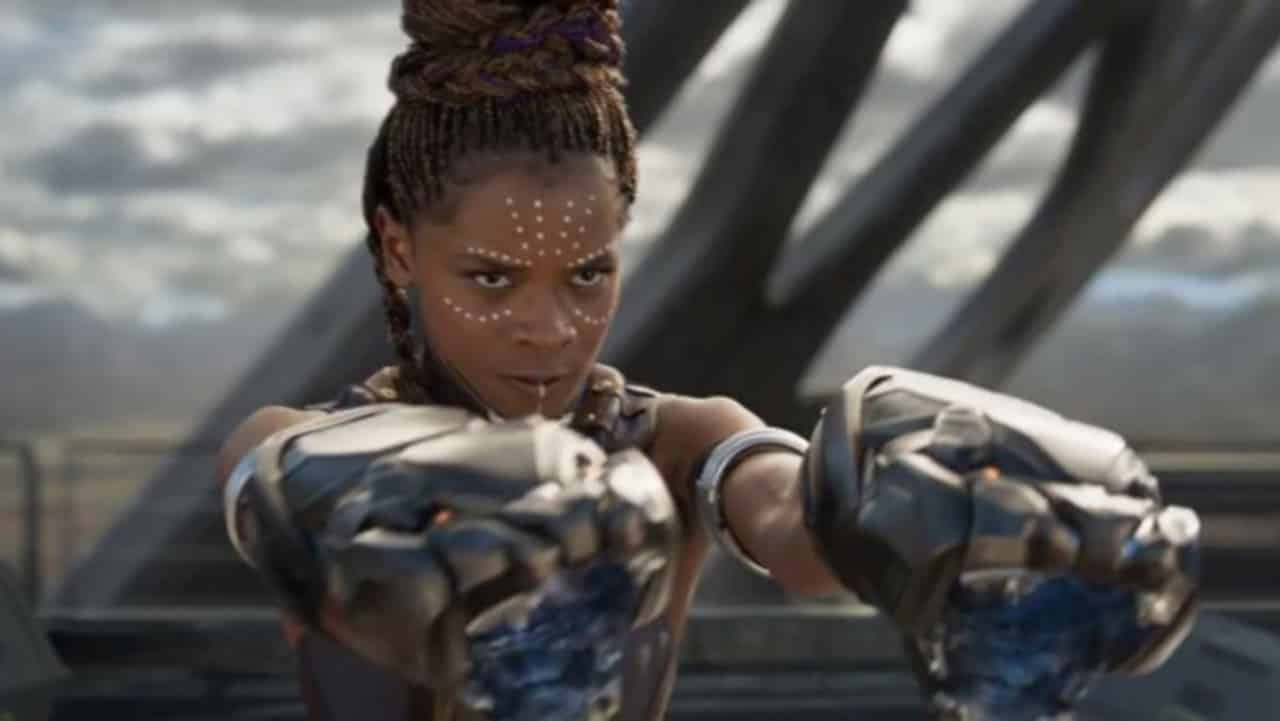 T’Challa: You are teaching me? What do you know?

Shuri: More than you.

Which brings us to the Okoye and the Dora Milaje.

Dear goodness, the strength, poise, and loyalty of T’Challa’s personal bodyguards, chiefest among them the fierce Okoye. Unafraid to voice her concerns to T’Challa, to warn him not to repeat tactical mistakes he’s made in the past, to set aside her personal feelings in order to serve Wakanda and its king, Okoye is a formidable soldier, general, and warrior. The Dora Milaje act as a unit, springing into action, spears in hand, using their surroundings to their advantage (we’ve got to admit, we both threw our fists up in the air when Okoye snatched her wig off her head in that club and threw it at her attacker as both a weapon and a diversion).

Their military precision is impressive, and their commanding presence any time they are on screen is breathtaking. Okoye’s loyalty to Wakanda is second to none, and she would do anything to protect and preserve its throne and the person who sits upon it. Athletic, tough, tenacious, purposeful…these are all of the qualities demonstrated by the Dora, and by the women, T’Challa holds dearest, keeps closest, and respects highest. With a leader who values such qualities in the men and women around him, we can’t help but root for the Black Panther and feel like Okoye when T’Challa is threatened. 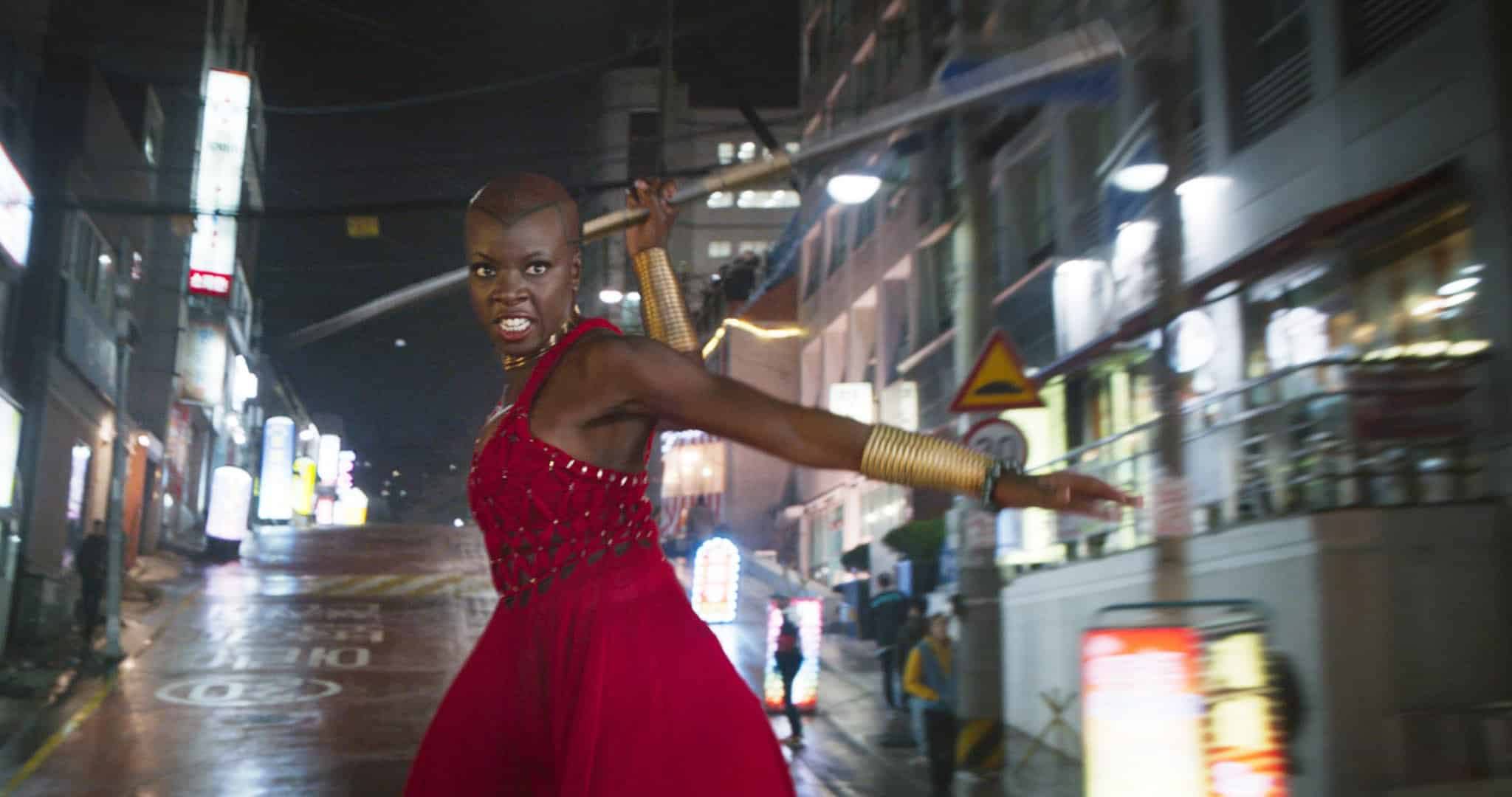 Okoye: If he touches you again, I am going to impale him on that desk.

Our efforts to highlight the recent increase in representation of diverse and powerful females from all walks of life in film is in line with the spirit of feminism. Women supporting women! Unfortunately, there is a long-standing history of stereotypes associated with feminism, where claiming to be a feminist identifies you as a “bra-burning” “man-hater.”

The disdain for the term stems from a long history of women being movers and shakers politically, economically, and socially in an effort to achieve equality with men. Humans are creatures of habit, feeling safe when the status quo is maintained and things are stable. Understandably, men have felt threatened by the shift in power dynamics due to the increased strength of women. This is a past and current issue, yet movements such as #MeToo, and the increased opportunity for meaningful female roles in film is a sign that we are moving in a different direction culturally.

With that said, being a feminist means being pro-female. It does not and should not equate to misandry. We do not seek to discredit sex differences because they do in fact exist, but our beliefs on feminism center on the fact that men and women should be treated equally.

Respect – for self and others – this is feminism. The increased representation of women in film is fostering the spirit of feminism and is one way that women are claiming their power. Great progress has been made, but there is more to do. We believe that we are in a time period where women have once again gained momentum, and we hope to continue to support one another.

Black Panther showed us a country where the women are innovators, influencers, warriors, and dynamic forces, and where men and women held equal footing, equal voice, and equal power. What an incredible place to live, and what a remarkable utopia to which we can aspire.

To that, we say: Wakanda (and its Women) Forever!

Shuri: This corset is really uncomfortable, so can we all wrap this up and go home? 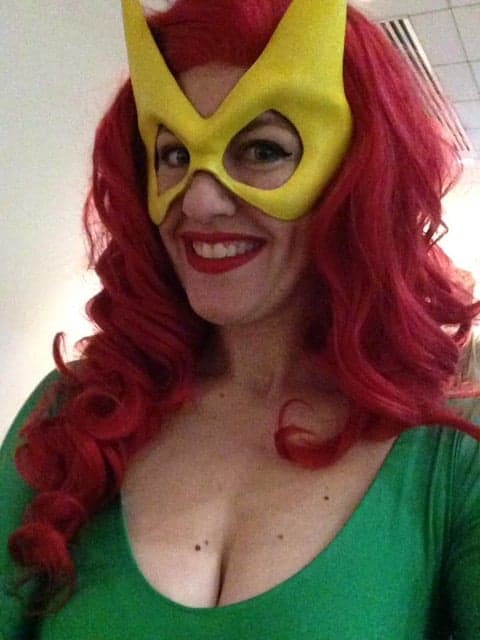 Lindsay Stewart is where geek, nerd, and dork meet on the Venn Diagram. Cosplayer, costumer, panelist, geek, Mutant, and AsperGirl who’s regularly found on the con circuit or hanging out in her local comic book store. 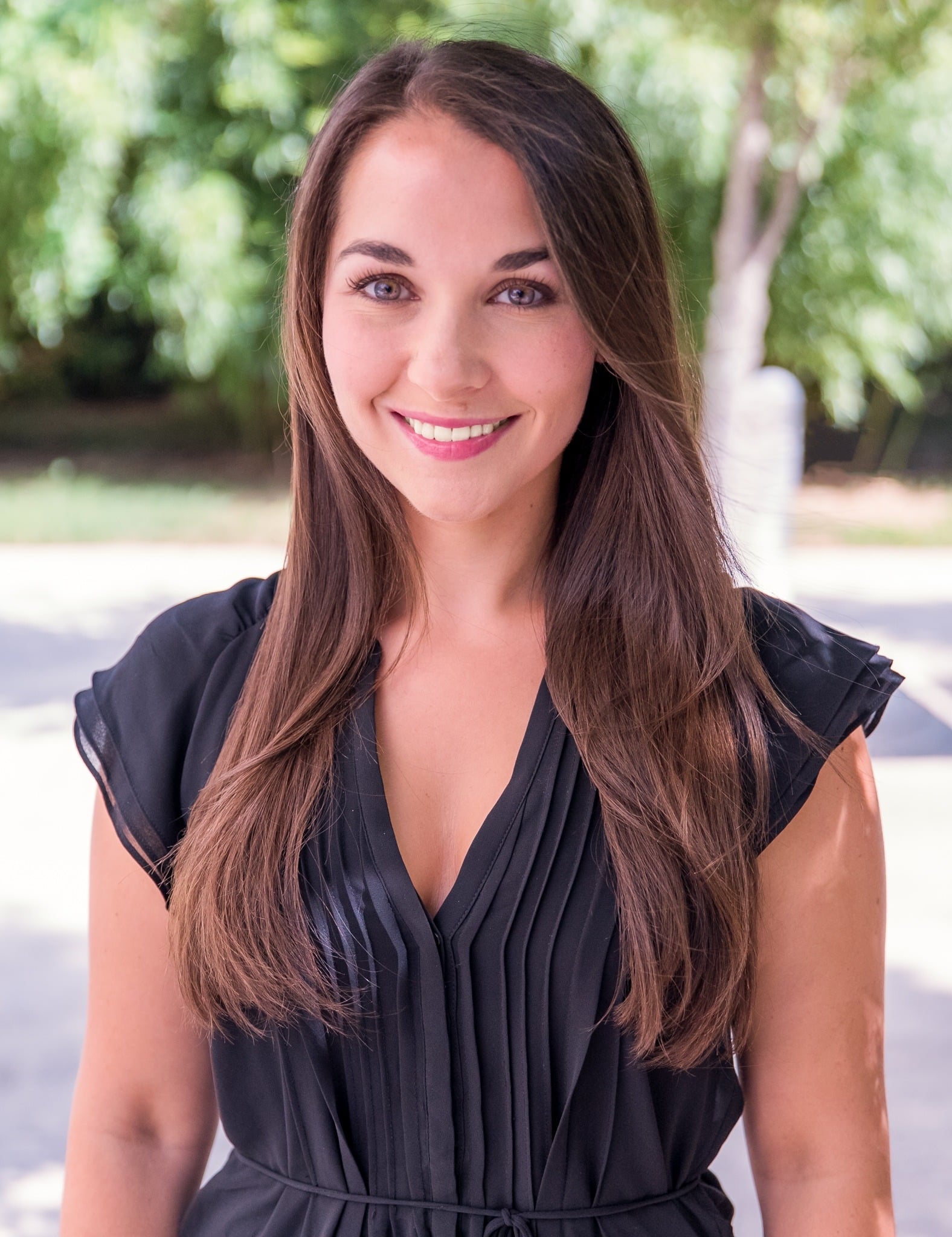 Dr. Emma Kate Wright is a Shrink Tank contributor, a standing member of the Shrink Tank Podcast, and Harry Potter fanatic. In between clients, you can find her singing her way through life and staying current on pop culture events. 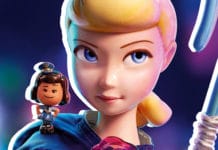