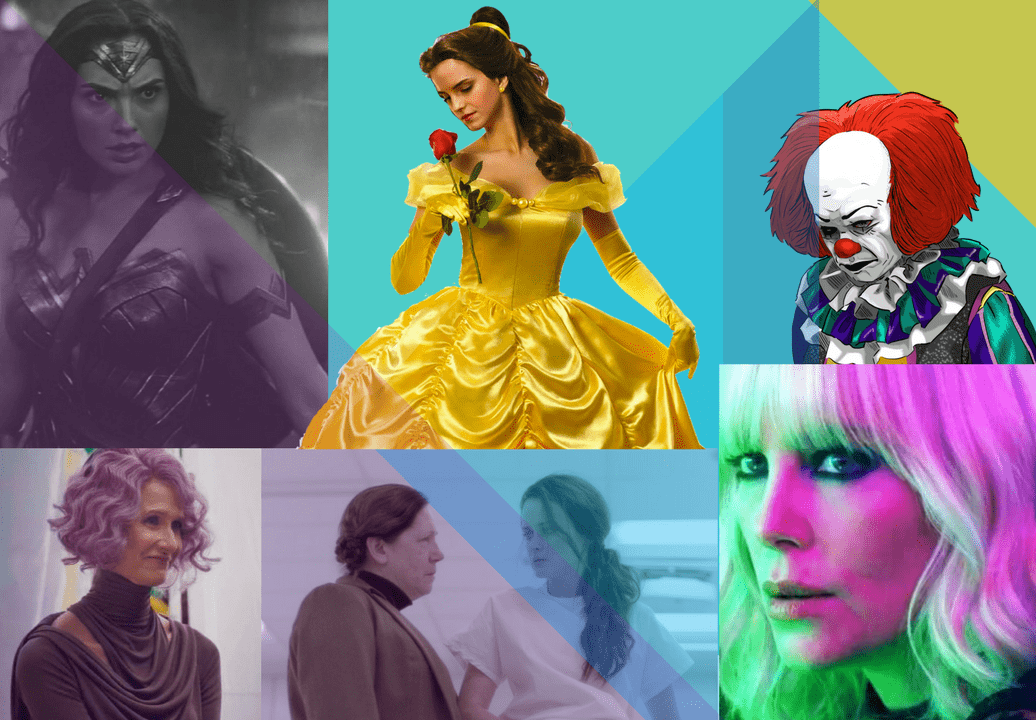 In 2017 women led the charge in this country, bookended by the January 21st marches and the #MeToo movement (including TIME’s naming the ‘Silence Breakers’ as Person of the Year).

There was a female power surge in pop culture as well, epitomized by a certain Amazonian…

For the most part, movies and television shows that premiered this year were in development or produced prior to 2017.  So not all that emerged on the pop culture landscape was a direct response to the social-political upheaval of the year that was.

But the zeitgeist always affects how we interpret, celebrate, or despise characters.  Did I select 9 heroines against only 1 hero this year because I went looking for female characters?  Perhaps, but I’ll let my list speak for itself. Below are my 10 top heroes and 10 top villains for 2017 and, for comparison, here were my picks for 2015 and 2016.  A few of these picks also got HQ and VQ scores, so be sure to check out those ratings.

Although I didn’t rank order this list, Wonder Woman was the undisputed hero of the year.  Strength, valor, empathy, altruism, grace- Gal Gadot’s portrayal captured all that audiences hoped to find in the most iconic superheroine of all.  Cinematic history was made when she first unleashed her uniform, climbed that ladder, and charged across “no man’s land.” 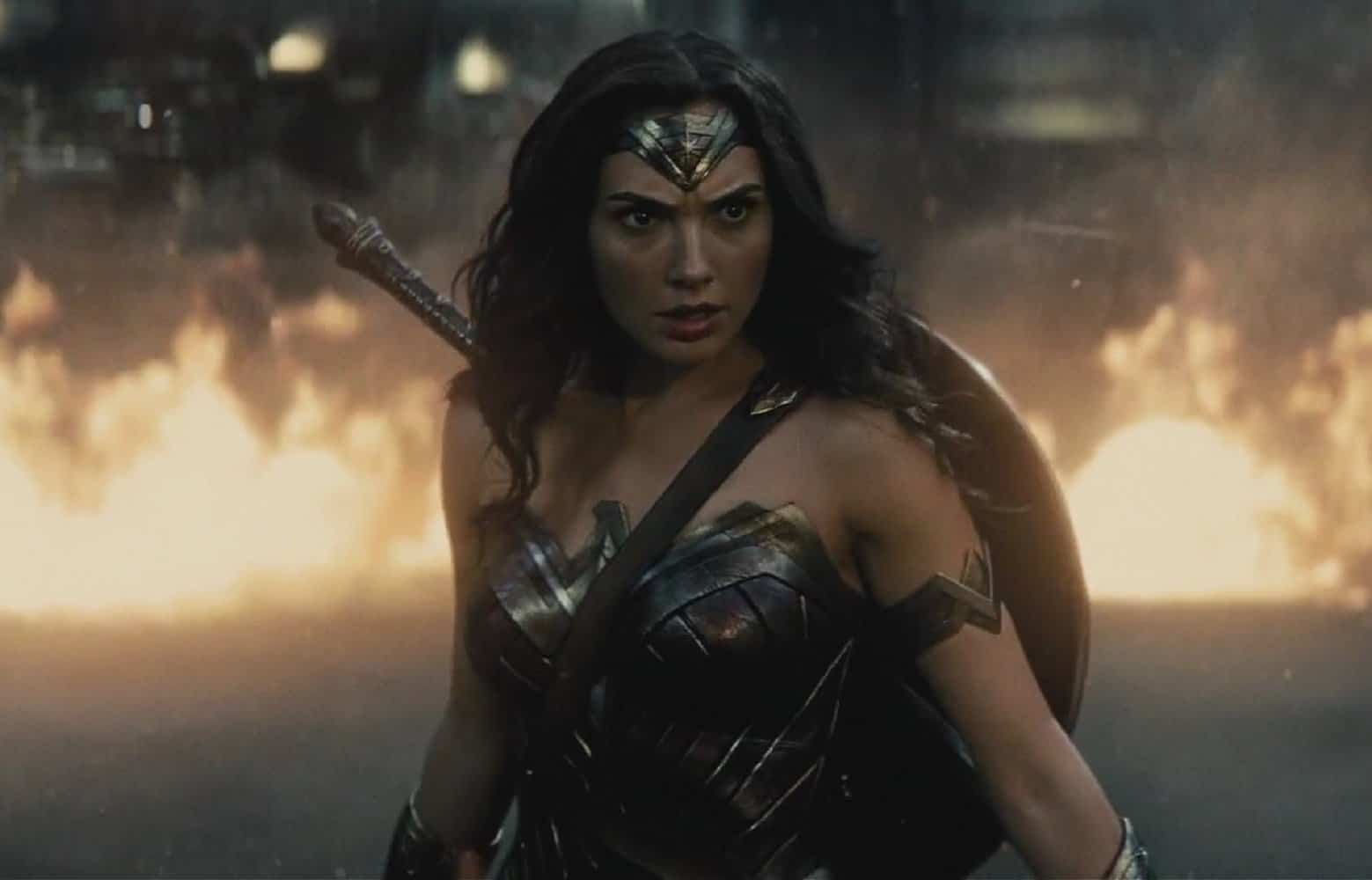 Belle from Beauty and the Beast –

Haters may contend that Belle (Emma Watson) only fell for the Beast because of Stockholm syndrome.  What can’t be argued is that she’s a curious intellectual, repulsed by sexism and machismo, and that alone set her apart from standard Disney princess fare.  This live-action remake cracked the box office all-time Top 10, so millions of girls around the world now have a role model for a new era of feminism.

This chapter of the X-Men saga charted new territory with its violence, profanity, and tragic themes.  The story’s driving force was the girl mutant cut from the same cloth as Wolverine.  At times Laura (Dafne Keen) came across as a relatable kid, just trying to figure out her place in the world.  But when cornered her claws came out . . . literally.  Wonder Woman’s bolt across “no man’s land” was the superhero movie moment of the year.  But Laura’s rage-fueled initial confrontation with her pursuers was a close second.

Though this thriller was set in 1989, its protagonist staked a claim on the present and blazed a trail to the future.  Broughton (Charlize Theron) was a secret agent who repeatedly opened cans of whoop-ass on bad guys.  The action was meticulously staged (the single tracking shot, stairway fight scene was an instant classic) and the violence gritty- unlike James Bond, Broughton got fatigued and bruised during combat.  But like Bond, she’s suave, well-dressed, and attracted to women.  Hear that in the distance?  It’s the sound of ground being broken. 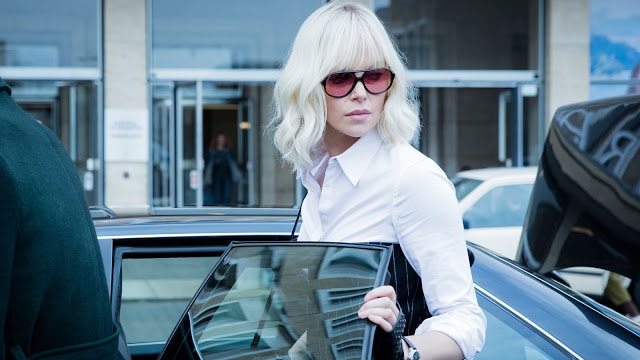 Early on it was hard to read the protégé of General (nee Princess) Leia Organa.  Was Holdo (Laura Dern) a stiff technocrat, content with sticking to protocols?  Was she incompetent or even craven? Could she possibly be a traitor to the Resistance?  But when all of the cards were on the table she proved a strong leader whose tough decisions turned disaster into a fighting chance for survival.

Then she saved the day (and made Episode IX possible) by making the ultimate sacrifice in stunning fashion.

Rachel Lindsay from The Bachelorette –

Rachel was a big hit as one of the final three woman on Nick Viall’s season early this year.  Fans then got their prayers answered when Rachel became the Bachelorette.  She’s smart, funny, radiant, and spunky.  Watching her give the boot to several jerks was immensely satisfying.

And, by the way, she was the first African-American lead in the history of the show.

Courage was a central theme of this riveting depiction of the British military retreat from the eponymous French town at the outset of WWII.  After all, the critical marine evacuation inspired Winston Churchill’s “We shall fight on the beaches” speech.  Courage comes in many forms and is not always festooned with bravado.  Dawson (Mark Rylance) showed taciturn, determined bravery as he sailed his private boat across the English Channel to rescue troops.

Speaking of courage taking many forms, how about the moxie it took for a 1950’s housewife to take the mic as a stand-up comic?  Midge (Rachel Brosnahan) proved yet again that hell hath no fury, or comedy material, like a woman spurned.  She didn’t just make others laugh to keep herself from crying.  She’s a fictional forerunner of the modern comediennes we need to help skewer the outrages of this wacky time.

By the end of this psychedelic take on the superhero genre, the God of Thunder had lost his hammer, girlfriend, sister (good riddance, though), father, three of his best friends, locks, an eye, and home world.  But he did gain a comrade-in-arms, the last of an all-female battalion that once protected Asgard.  Valkyrie (Tessa Thompson) was a hard-drinking, butt-whooping scene-stealer who assumed the sidekick role traditionally cast as male.

Interesting that in this female-dominated year only two mothers made my list of top heroes:  Midge Maisel and Madison Clark (Kim Dickens).  Unlike Midge, Madison had to survive the zombie apocalypse while juggling the demands of motherhood.  Her maternal instincts were both cunning (she proved highly manipulative at times) and lethal, as she was willing to kill both the dead and the living to protect her son and daughter. 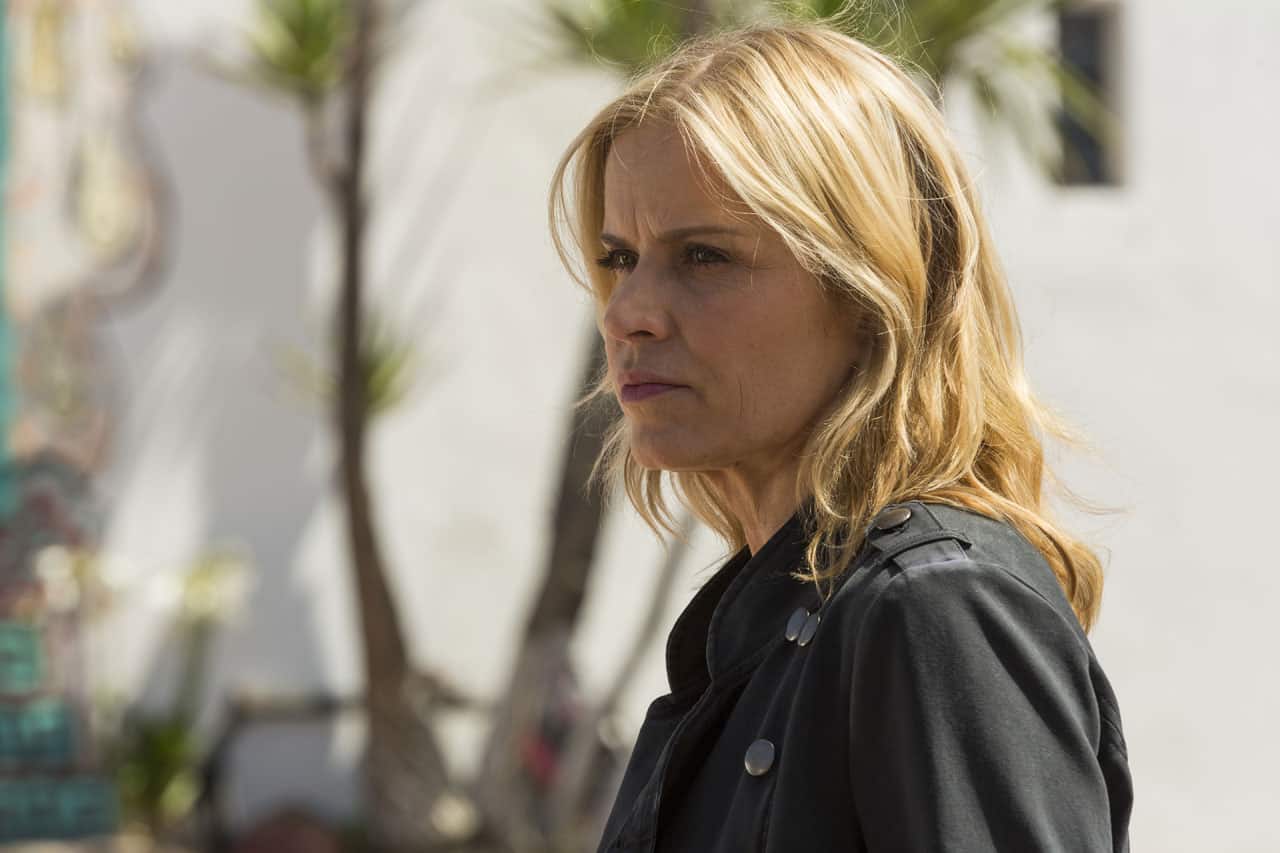 Villains tend to be more interesting when we know their backstories and what makes them tick.  Vulture’s motivations were surprisingly anchored to the day and age:  sticking it to the Man and, along the way, providing for his family.  He donned his rather intimidating suit to salve deep resentment over economic and societal changes.  Guess who Vulture (Michael Keaton) would have voted for back in 2016.

The Saint of Killers from Preacher –

If you happen to be looking for a TV show that is out there (like, way, WAY out there), then Preacher may be for you.  Previously I described it as Buffy the Vampire Slayer meets Quentin Tarantino (but on steroids, and with a shot of tequila).  The show’s cast of characters is epic, and the main heavy is the Saint of Killers (Graham McTavish), a vicious Confederate soldier turned havoc-wreaking demon.  Not someone you want on your tail.

Clowns the world over are ruing the record-breaking box office success of this Stephen King adaptation.  For better or for worse, people increasingly have been creeped out by clowns.  But thanks to Pennywise (Bill Skarsgård), an entire generation now associates clowns with voracious demons.  Few characters achieve this degree of cultural effect, and he’ll remain an icon for years to come.

He’s that despicable Little League dad, except with over 250,000 Twitter followers, a millionaire son (Laker rookie Lonzo Ball), and a big media megaphone.  This is the guy who asserted he could beat Michael Jordan in a game of one-on-one . . . . (okay, I had to stop laughing there- now I’m good) . . .  He also said Lonzo’s better than Steph Curry . . . (wait, I can’t!) . . . As if he needed any more publicity, LaVar and President Trump had a smackdown of WWE proportions over the release of middle son LiAngelo from Chinese custody for shoplifting.

Aunt Lydia from The Handmaid’s Tale –

The plight of handmaids in the dystopian Gilead hit frighteningly close to home in 2017.  Subjugation of women ranged from sexual to economic to educational.  Aunt Lydia (Ann Dowd) was the sadistic enforcer, charged with keeping reproductive slaves in line.  If what Madeleine Albright said is true, that “there is a special place in hell for women who don’t help other women,” then imagine where Auntie is going to end up. 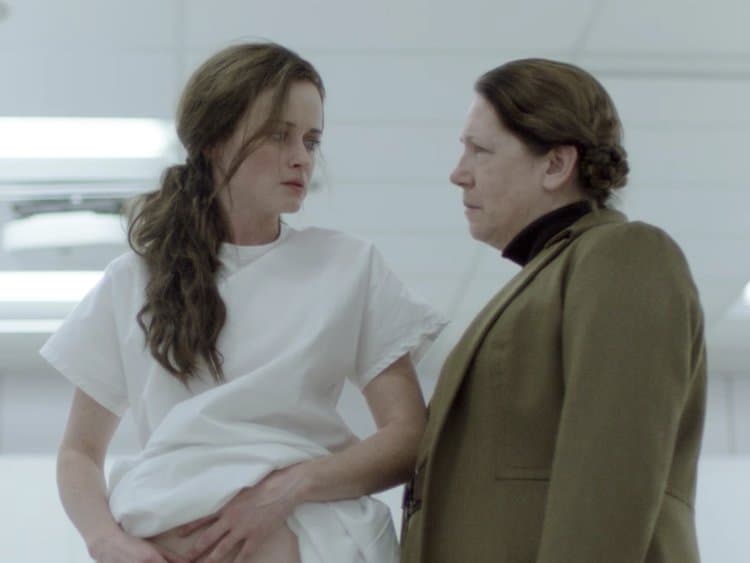 The superhero genre had yet to see anything like Legion, which was heavily dosed with Twin Peaks-like devices such as off-the-wall humor, eerie dream sequences, and a scary villain at the center of a mystery.  That villain was the shape-shifting Devil with the Yellow Eyes, who we saw mostly as Lenny (Aubrey Plaza).  She was swaggering, sometimes likeable, scheming, and malicious.

Bobby Riggs from Battle of the Sexes –

It’s all too easy to pass off this tennis pro as a sexist anachronism.  But what transpired back in 1973, when the 50-something Riggs (Steve Carell) asserted that he could beat any woman, is the stuff of contemporary headlines (see John McEnroe’s comments from this year about how Serena Williams would fare against men).  Billie Jean King put Riggs in his place, but the struggle continues.

Thor’s vengeful, estranged sister was the first main female villain in the Marvel Cinematic Universe.  Cate Blanchett added dashes of cockiness and humor to her megalomania and brutality.  The result was a very cool villain who hopefully will resume her reign of terror in future installments.  Anyone who can crush Thor’s hammer with a bare hand deserves more screen time.

One of the best sequels ever made posed compelling questions about the nature of humanity, including how society will change as artificial intelligence becomes more prominent.  Luv (Sylvia Hoeks) was one of several characters who were replicants, or manufactured humans with enhanced physical and intellectual abilities.  Two catches about replicants- short life span and scrambled emotional make-up.  As Luv ruthlessly did the bidding of Wallace, her replicant-producing master, her affective responses bounced around from sadness to rage to jealousy, then back to icepick neutral.  She was like a magic 8-ball; shake her up and see what floats to the surface.

The #MeToo movement rightly rocked politics, the business world, and the entertainment industry.  Weinstein’s fall set off a domino effect that also took down the likes of Kevin Spacey and Matt Lauer, with more to come.  He became the face of infamy, the symbol of sexual predation.  Years from now we’ll be remembering his reckoning above all others.

Did your favorite 2017 hero or villain make the list?  If not, please let us know in the comments!

Craig Pohlman is the co-author of CinemAnalysis: Learning about Psychology through Film.  He tries to be heroic at least once or twice a week.