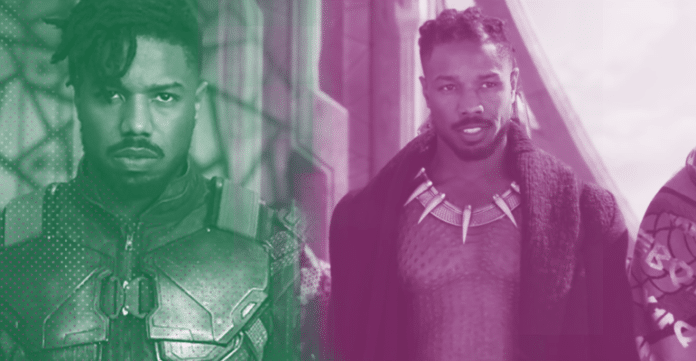 The 2018 pop culture roster of heroes and villains didn’t have quite the same kind of thematic thread as the female-dominated roll call for 2017 (though most of this year’s heroes are females).  While 2017’s most indelible hero was an Amazonian princess, the transcendent hero of 2018 is a Wakandan king.

Yimbabe! T’Challa has been around for decades in comic books and animated series.  But this year’s historically-successful movie made him a cultural touchstone with effects that were wide-spread and that will be long-standing.  Not only did the film reverberate about race and culture, it continued the female wave with terrific characters such as Shuri. And just for good measure, T’Challa also chewed a ton of scenery in a little flick you may have heard of- Avengers:  Infinity War.

Helen Parr does more than just halt runaway trains, thwart assassination attempts, and lead a team of superheroes.  She also balances the demands of motherhood, marriage, and career. Superpowers are great and all, but grit, intelligence, and empathy are what really set Elastigirl apart.

Talk about performing under pressure.  A gargantuan amount of hype surrounded this snowboarder with family roots in South Korea, site of the Winter Olympics in Pyeyongchang.  The quadrennial timing of the Games means athletes have much narrower windows of opportunity. She answered the call, scoring 98.25 out of 100.00 to win gold in the halfpipe.  And she was only 17 years old.

The Alienist was an excellent series based on Caleb Carr’s novel.  A police procedural set in 1890’s New York City, it depicts the nascent field of forensic science, including prototype fingerprint analysis. Anchoring the team hunting a ferocious serial killer is Sara, played by Dakota Fanning. She’s cerebral and resolute- a predecessor to profilers like Clarice Starling.

With acoustically-sensitive aliens on the prowl, the Abbott family survives by eliminating sound from their existence.  That’s not easy to do when, for example, you step barefoot on a rusted nail or go into labor. Evelyn of A Quiet Place is a matriarch for our time, protecting her children from an ever-changing and increasingly frightening world.

So Emily Blunt had a heroic year.  First she plays Evelyn in A Quiet Place and then she stars in one of the gutsiest sequels ever made.  Maybe she isn’t Julie Andrews, but who is? She does have vocal chops and her version of the eponymous, magical nanny has a spoonful more attitude.  She rescues the Banks family (again) while enchanting the rest of us.

Ally – A Star is Born

I thought the most poignant moment in A Star is Born was not the tragic ending, but rather when Ally takes the stage with Jackson to sing “Shallow.”  Lady Gaga’s acting in that scene is superb as she takes her character from stifling self-doubt to a leap of faith in herself.  On stage in front of thousands of people, Ally heroically unleashes her voice.

The newly anointed Duchess of Sussex didn’t leap tall buildings in a single bound, fight off flying monster sharks, discover the cure for cancer, or eradicate poverty around the globe.  But even in the blindingly intense spotlight of a royal wedding she was incandescent with her confidence, verve, and independent streak.  For better or for worse, the British royal family remains a lodestar for much of the world.  In joining that family, Markle showed that whoever you are, you have the potential to go anywhere- and shake things up when you get there.

The Red Sox pitcher had accomplished a lot over his career in the regular season.  Playoffs? Not so much. His first start of the 2018 post-season was a disaster (he allowed 3 runs on 3 hits in 1⅓ innings against the Yankees), furthering his reputation as a big-game choker.  But then he found something and turned in huge performances against the Astros and Dodgers en route to the World Series Title. Trophy earned, banner raised, albatross removed.

The documentary Won’t You Be My Neighbor? provides numerous insights into the life and career of a true American hero.  Case in point- Rogers showing tremendous gumption at a Senate hearing to turn the tide of opinion and secure funding for PBS.  Rogers’ legacy of kindness and unconditional love is a welcome anodyne for a Trump-dominated culture.

The scene-stealing heavy in one of the biggest movies of all time does more than commit homicide, prolicide, and genocide.  He actually manages to generate sympathy. Many a villain has waxed about his/her “save-the-world-by-destroying-it” ploy. And there is a twisted logic in Thanos’ plan to preserve dwindling resources by wiping out half of all life in the universe.  He wants to do good by doing a whole lot of bad. His conviction makes his atrocities understandable, though not forgivable.

This year’s Oval Office “exchange” between Yeezy and the President of the United States was a gold mine for late-night comics and meme generators.  His rant was so far afield from political lucidity that he had to land on this villain list.  But by serving as a poster child for the importance of mental health services, maybe I should swing him up to the heroes list.

The Ohio State football coach set a new standard for tone-deafness, which is really saying something in the midst of the #MeToo movement.  He was caught red-handed coddling a domestic abuser in his employ and then had the audacity to be incredulous at all the fuss. Sure, he had to serve a 3-game suspension and later in the season announced his retirement from coaching.  But unfortunately he will continue to be a force in athletics and may very well end up back on the sidelines. Maybe he can use his millions to buy a clue.

Since 1978 the name and creepy face (originally a Captain Kirk mask- true story) have been synonymous with the slasher genre.  This year’s reboot of Halloween was a critical and commercial smash, further cementing the muted serial killer as a horror icon.

The Americans ended its run this year, with KGB agents Elizabeth and Philip Jennings ending their tour in ’80 United States.  It’s a rare feat to turn villains into protagonists that audiences find themselves supporting, but this show accomplished that.  Nevertheless, Elizabeth, in particular, left a wake of destruction with murders, broken families, and ruined lives. There had to be a reckoning and she got hers in gut-wrenching fashion.

Crazy Rich Asians is an exceptional romantic comedy.  As discussed on the Blew My Mind podcast, one thing that makes it unique is that it isn’t about “the chase,” but rather how a loving, healthy couple navigate their way through a challenging family situation.  Eleanor is the biggest obstacle for her son Nick and his girlfriend Rachel. Protective to the point of prejudice and emotional cruelty, she’s every aspiring daughter-in-law’s nightmare.  At least she comes around . . . a little bit.

I was there in 1985, watching Rocky IV on the big screen Thanksgiving weekend.  I jingoistically cheered on Rocky Balboa as he knocked out Soviet heavyweight Ivan Drago, avenging the in-match death of his friend, Apollo Creed.  It was awesome, sure-fire, audience-pleasing entertainment. But the characters were cartoons, especially Drago. Not so in Creed II, which pulls the curtain back on Drago’s shattered career, disintegrated marriage, and complicated relationship with son and protégé, Viktor.  We don’t just want Adonis Creed to defeat Viktor, we want him to kick his ass. But at the same time we feel for Viktor and his father, desperately trying to pick up the pieces and build a future.  Nuance is often lacking in pop culture villains, so it was a pleasant surprise to find it in a behemoth pugilist.

The truth-or-dare scene from Eight Grade was the most disturbing movie or television scene all year.  And Riley may have been the most frightening character. A predatory high schooler, he was an all too real villain.  We may need many more such grueling on-screen moments to help shock us out of this boys-will-be-boys, just-locker-room-banter, it’s-a-scary-time-for-young-men-in-America hell in which we’re mired.

T’Challa and Killmonger didn’t just face off in the biggest movie of the year.  They became protagonists that will be remembered and discussed for generations, each representing a path to ending centuries of injustice and balancing the Third and First Worlds.  Killmonger’s troubling backstory lays bare his convictions.

He’s the most heroic villain of the year, or the most villainous hero. Either way, he’s a character for the ages.

‘The Bachelor’ Recap: The Age of Love