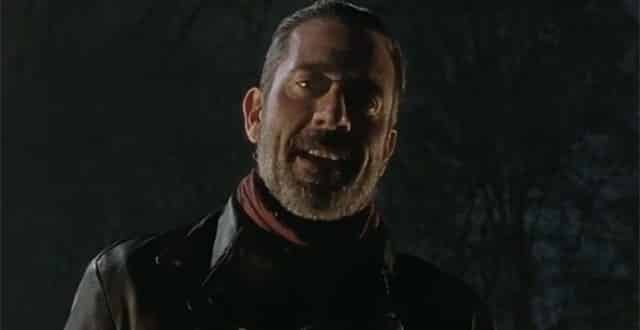 My wife, Jen, and I have been devoted fans of The Walking Dead since it debuted back in 2010. Not wanting any spoilers, we have avoided the comic book series on which it’s based. So neither of us knew much about Negan, the big bad who made his first appearance in this season’s finale. Characters have been referring to him since the mid-season finale/cliffhanger. The build-up has been excruciating, with numerous hints dropped about just how nasty this guy is. As a result Jen has developed Negan-phobia, and the finale only exacerbated her condition.

Previously I’ve described my Heroism Quotient (HQ) and Villainy Quotient (VQ). I rate villains along five factors (0-20), yielding a Villainy Quotient (VQ) with a maximum score of 100. The factors are drawn from the thinking and research of Dr. Philip Zimbardo (of the Stanford prison experiment) and other experts on evil. The higher the VQ, the more diabolical the villain.

So here’s how I score Negan:

He gets a 14 out of 20. Clearly, morality is a problem for this guy. But while I wouldn’t go so far as to say he is merciful (at all), in the midst of toying with our heroes at the climax he could have chosen to pummel the frailest (like Carl or Maggie). Instead, he just, you know, played eeny-meeny-miny-mo.

Degree of harm or damage done

It would seem that Negan and his Saviors have been a post-apocalypse wrecking ball in the area around Alexandria, VA. His score could elevate from a 15 should he expand his reach (say, along the eastern seaboard).

It’s a reasonable assumption that Negan and Lucille (his barbed wire bat) have been doing their thing since the start of the zombie plague a few years hence. Although a guy this sociopathic may well have been committing atrocities long before, I’ll deduct 3 points to land on a 17.

Malice towards victims, intent to cause suffering

First of all, props to Jeffrey Dean Morgan for his portrayal of Negan. He appeared in just one scene, but this has the makings of a career-defining role. He combined sadism and charisma to forge something truly unnerving. It’s not enough for him to kill- he wants to intimidate and torment. The only reason I went with just an 18 here is that he does have an interest keeping most of his victims alive to do his bidding.

Negan enjoyed walking the line of down-on-their-knees heroes, deciding who to beat to death. And there was a smile on his face when the blows started raining down (“taking it like a champ!”). Max score of 20.

Sum up these factor scores and Negan’s VQ is 84. Interestingly, his VQ is higher than the Governor’s (which was 73). Now I can only hope that Jen and I can get some sleep without nightmares of Negan (and Lucille).

How Heroic is Wonder Woman? A Psychologist’s Answer

The Psychology of Our Connection to Villains