When rock star gymnast Simone Biles was four years old, her grandparents, Ron and Nellie Biles adopted her and her little sister, Adria, because their mother had an ongoing struggle with substance abuse.  Simone’s grandparents became her adoptive parents. We call this a “kinship adoption,” where a family member steps in and legally adopts a child.  It happens fairly frequently.  Back in December, Simone told USA Today, “When I was younger, I was adopted by my grandparents, which are now my parents. I call them mom and dad. Everything’s just been so normal.”

On Sunday night, NBC’s gymnastics announcer, Al Trautwig referred to Ron and Nellie as Simone’s grandparents. It was an honest mistake, even knowing the family arrangement.  But when a person tweeted to say he should call them her parents and not grandparents, he fired this off: 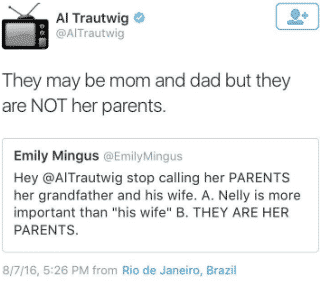 Of course, this fired up the Twitterverse. People called him “horribly rude,” and “insulting,” “insensitive and cruel,” and “disgusting.”  The hashtag #FireTrautwig began gaining traction.  I know you’re all shocked that Twitter conducted a public HR review and decided to remove Al from his gainful employment.

You would also not be surprised to learn that Al became contrite the next day after the NBC head knockers gave him a good talking-to.  He emailed journalists this reply: “To set the record straight, Ron and Nellie Biles are Simone’s parents.”

I’m an adoptive parent myself. I’ve got one white kid, one brown kid, and two black kids. We’ve definitely been through the “Are you with them?” issues in public. It comes with the territory. We know others who were adopted by grandparents or aunts and uncles and they have to navigate all those complexities with people who say the wrong thing or can’t quite wrap their heads around it all.

To be honest, though, I’m more annoyed by the thin-skinned Twits than I am with Trautwig. His biggest error was to double-down on his comments in that stupid tweet without seeking a little consultation, but in fairness, it’s an honest mistake to make and it’s not something that should cost someone his job.

It is, however, a great opportunity for education. Twitter is great if you want volcanic, disproportionate rage, but terrible if you want some illumination on a topic.

Here are ten things about adoption to consider: 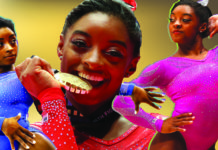