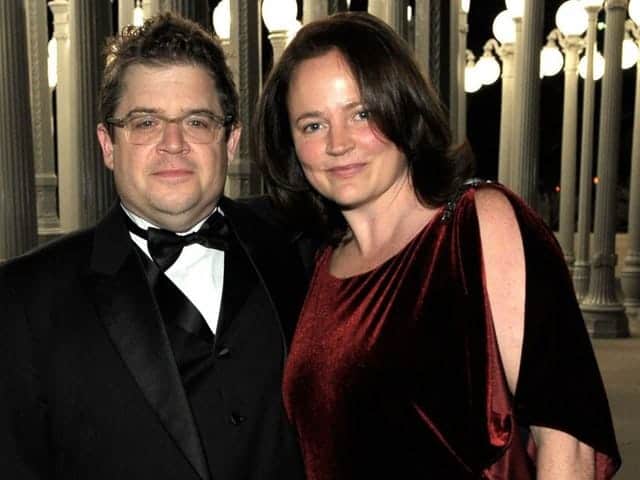 Patton Oswalt’s recent engagement has sparked a conversation about widowhood, grief, and remarriage.

When I was in graduate school I had a research project on widows and widowers. I choose the topic for personal reasons. My father-in-law died unexpectedly while my family and I were living with my in-laws. We had sold our home to save money while in graduate school and planned to live with them for a couple of years. We ended up living with my widowed mother-in-law for another 6 additional years before she remarried in the summer of 2011. I thought back to my research on widowhood when I heard about Patton Oswalt.

Patton Oswalt’s recently announced his engagement to Meredith Salenger. Oswalt’s wife, Michelle McNamara, died unexpectedly in her sleep 15 months ago in April 2016. The engagement announcement was met with surprise, shock, and criticism from some outside observers. Several folks took to social media and blasted Oswalt, saying they thought it was too soon for the recently widowed Oswalt to get married again.

Why Some Criticized Oswalt’s Engagement Announcement

When crime writer Michelle McNamara died unexpectedly in her sleep on April 21, 2016, comedian Patton Oswalt was left to pick up the pieces of his shock and grief.  The devastated widower also became a single parent to their 8-year-old daughter Alice.  Oswalt used his own social media and stand-up career to chronicle his grief.

“I was face-down and frozen for weeks.  It’s 102 days later and I can confidently say I have reached a point where I’m crawling,” he commented after nearly fourth months.

“The world gazes at you like a hungry but indifferent reptile when you’re widowed.  Last night I took off my wedding ring.  I couldn’t bear removing it since April 21, 2016.  But now it felt obscene,” he shared after a year.

Funerals are final but there's no closure. Memorials are hopeful but they don't bring back the dead. pic.twitter.com/K8Ss7DejEj

Oswalt’s shift from processing his grief to ecstatically announcing his engagement has been difficult for some folks to fathom, and they loudly took to social media to ensure he knew it.  Some people online said that Oswalt was thinking too soon of getting married again. Some said they even found it distasteful for him to write so openly about his grief, while then plunging back into the dating world or thinking of remarriage.

Am I the only one who saw that Patton Oswalt got engaged and thought "too soon!"? 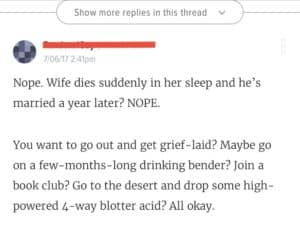 Another said, “Like good for them and all but, personally, I’d like to be mourned for more than a couple months.”

Getting married this soon after that? Not okay.

The Support Oswalt and Salenger Have Received

Oswalt and Salenger came out swinging over the weekend, defending their relationship and confronting the online trolls.  The engaged couple linked a blog post from Erica Roman who expressed her happiness for the couple and anger toward those who judged their engagement.  Roman lost her spouse around the same time Oswalt did last year.

In the post titled, “A Widow’s Rage Defense of Patton Oswalt’s Engagement,” Roman stated that she normally doesn’t follow the love lives of celebrities, but she couldn’t help but become familiar with Oswalt’s situation, as her husband died unexpectedly within three days of Oswalt’s wife.  She started her blog post with, “Dear ignorant, judgmental, assholes …”

“Who gave you the position to judge when it’s ‘too soon’ for a person who has suffered the worst to be able to find happiness and companionship again?” she wrote. “It’s been 15 months! How long should a widow sit in isolation before YOU are comfortable enough to release them from their solitary confinement?”

Roman added that Oswalt’s decision to move on isn’t a sign of weakness or neediness but of “strength and courage.”

She concluded that the new spouse doesn’t replace the one who has died.  “One love isn’t moved out to make room for someone new,” she said. “An addition is built. Just like my love for my daughter was not diminished by the birth of my son, so too, the love widows can have for someone new does not diminish the love of the one lost. The expansion of the heart is part of the grieving process.”  Roman’s post has been viewed by more than 3.5 million people.

Facebook COO Sheryl Sandberg also expressed her support in a comment on Oswalt’s Facebook post.  Sandberg has been public about her own grief in the unexpected death of her husband, Dave Goldberg.  Her recent book Option B: Facing Adversity, Building Resilience and Finding Joy, explores her process of grief and regrouping in life as a widow.

Setting aside the personal emotions, Oswalt’s engagement and the ensuing response is an opportunity to step back and evaluate what we know about widowhood, grief, and why folks strongly react to remarriage.

By all accounts, Oswalt’s marriage to McNamara was a happy one.  And according to sociologists and marriage therapists, that past happiness is why Oswalt was open to love the second time around.  Susan Shapiro Barash, a gender expert and bestselling author, has spoken about men whose marriage ends only because of death tend to have a desire to repeat the happiness they knew.  Barash claims such men love being married and are good husband material.  The odds were that Oswalt probably would get remarried.  Men who have lost their spouse remarry more often than widowers.

When is remarriage too soon?

There are no hard and fast rules for deciding when the time is right (or wrong) for a widowed person to begin dating or falling in love with someone new.  Younger widows are more likely to wed than older ones.  Widowed men remarry more than widowed women and they remarried sooner than women. 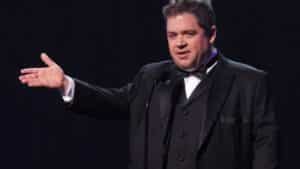 How long is someone supposed to grieve?

The question itself is flawed because it implies an end or a resolution.  Oswalt’s engagement doesn’t guarantee that he’s somehow finished grieving his loss, work through their own issues, or developed a health sense of self in singlehood.  It’s an ongoing process.  But that process shouldn’t automatically disqualify him from getting engaged or remarried.  Some spend their remaining lifetime moving forward and making progress in their grief and loneliness.  But most “never get over it.”  Rather, they learn to accept the loss and tolerate whatever level of pain they experience.  Their deceased spouse cannot be replaced even if they start a new relationship.

Grief is a family process.

So, what’s next for Patton and Meredith?  The biggest focus should not be the online trolls or the public but Oswalt’s daughter Alice, who was 7 when her mother died and is now eight.  In her bestselling book, Motherless Daughters: The Legacy of Loss, author Hope Edelman observes that a surviving father’s behavior in the wake of his wife’s death “matters [to the daughter] even more than we think,” in how it can influence a daughter’s long-term adaptation to the loss of her mother.  Of the women who were interviewed for Edelman’s book, 31% of the women who reported “poor relationships” with their fathers had experienced the remarriage of their father within one year from the time of the mother’s death.  Other research shows that the older the children are, the higher the conflict and disapproval of remarriage tends to be.

Edelman discovered that daughters who lose their mothers prematurely share certain qualities such as “a keen sense of isolation.”  Other qualities include “looking elsewhere for nurturing, but don’t know how to receive it. We tend to be hyper-independent, always braced for rejection and unable to ask for help.”  The more Oswalt helps Alice navigate this next life transition, but better it will be for everybody. Oswalt and Salenger probably have been attending to Alice’s needs since day one of their courtship. 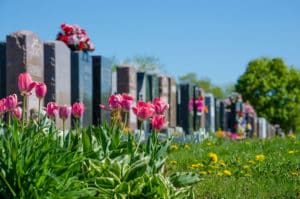 Here’s to Happiness For All

Grief is never completely private.  But for celebrities, the level of public awareness and opinion is even greater.  Patton Oswalt has used his celebrity to raise awareness and humanize loss and grief.  I believe he and Salenger now have an opportunity to teach the general public about finding love again.