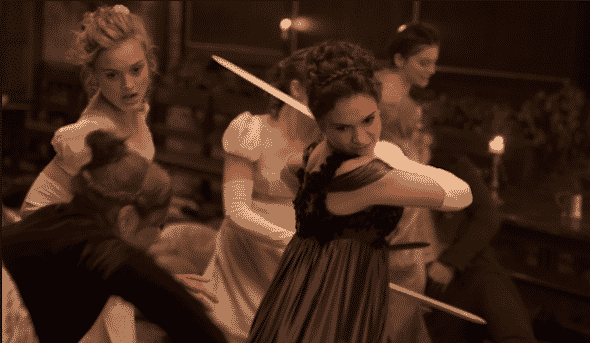 Two male shrinks that moonlight as film critics went to see Pride and Prejudice and Zombies together.  One went for the period romance.  The other went for the undead.  What’s weird about that?  They saw the film together, but did they have the same experience?  Here is their review. 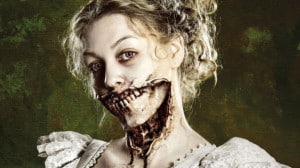 Jonathan Hetterly – I don’t exactly know how Seth Grahame-Smith came up with the brilliant concept for his 2009 novel Pride and Prejudice and Zombies.  Perhaps he wanted to create a story that enticed both male and female readers.  Imagine a period piece romance with all the English propriety and societal stuffiness.  But don’t stop there; add in a looming threat of a zombie apocalypse and England under threat not from neighboring countries but from the living dead.  That is what PPZ promises and what it delivers.  But is it a good film?  Frank, you are a romance buff, so what did you think?

Frank Gaskill – Pride and Prejudice and Zombies is nothing short of amazing!  The chance to see an early screener made me excited but also fearful.  I was preparing myself for a “Twilight-Esq” experience and was pleasantly disappointed. This is no Twilight, and believe me, I know Twilight!  This amazing and true adaptation of Jane Austen’s novel is not dumbed down and parallels the original novel in a way that I did not think possible. I will need to see the film again just to recapture the dialogue of the original book. I would imagine the screenplay is pure genius.

Jonathan Hetterly – Disclaimer, I have not seen any of the Twilight films, so I do not have the obsessive knowledge of that book and film series that Frank possesses.  I will say that Pride and Prejudice and Zombies is better than it has a right to be.  I was not expecting to like as much as I did.  Having said that, I must admit that PPZ is exactly the type of film that shuts off the critical part of my brain.  This type of film falls into the same arena that Tremors, Starship Troopers, and Roadhouse occupy.  I just enjoy the film for what it is; a sloppy mess that is nevertheless entertaining.  There is some brilliant casting.  Lily James, best known for her role on Downton Abbey, does Elizabeth Bennett justice.  Does she reach the high marks of Jennifer Ehle’s performance in the 1995 BBC miniseries?  Not even close, but she provides a degree of playfulness that is required for this film and is immensely more engaging and likeable than Keira Knightley’s version from the 2005 film version.  But the film is elevated in every scene that Matt Smith appears in.  Best known for his time on Dr. Who, Smith’s over-the-top ambiguously gay cousin, Parson Collins, is the type of overselling that this film needs.

Frank – I completely agree about Matt Smith.  He pretty much steals the show as a closeted gay cousin.  His scenes are hysterical.  The laughs in this film were entirely unexpected a perfect.  I laughed out loud and was lost in the moment.  Romantic comedies are my favorite!  This is literally the best date movie of the year.

Jonathan – Slow down there Frank.  Do you honestly believe girlfriends and wives want to see this film?  I think many may be turned off by the amount of violence.  This film’s PG-13 rating is misleading.  It should be rated R.  Will that turn off some women?  It’s one thing to read about violence.  It’s another thing to show it.

Frank – You don’t know what you’re talking about.  This film is going to make a ton of money.  Yes, I still can’t figure out why it isn’t rated R.  But the zombie aspect of the film works.  I was not expecting to be as scared and shocked by many of the scenes.  The action is phenomenal and the methods of zombie deaths is pretty grueling.  Plus, I learned a lot of new things about zombies.  Who knew they could lay traps?  That’s just one example of fresh ideas that are represented in this zombie film.

Jonathan – But this film does have some problems Frank.  First, the integration of period romance and zombie action film is not always smooth.  There were points in the film where I checked my watch because it had turned into Pride and Prejudice and zzzzzzzzz.  Second, by adding the zombie angle to Jane Austin’s original source material, the film takes time and focus away from other threads in the story.  The biggest casualty is the romance between Jane and Mr. Bingley.  They aren’t given much to do in this version and the contrasting romances between Jane/Bingley and Elizabeth/Darcy is lost.  But the biggest problem I found in the film was it was very dark and often difficult to follow the action and choreography.  Perhaps the camera was off.  But director Burr Steers may be the weakest element of this film adaptation. 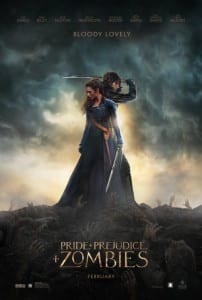 Frank – You literally don’t know what you’re talking about.  I cannot even speak to you right now.  Listen folks, go see this film.  I give Pride and Prejudice and Zombies an A.

Jonathan – Listen, if you plan on seeing a film titled Pride and Prejudice and Zombies, you don’t need a review to sway you one way or the other.  You know what you’re in for and hoping to see.  I can agree with Frank that you’ll get the thrills and laughs you’d expect from a film with that title.  I’d give it a C for the film, but a solid B rating for my level of enjoyment.

Frank – Hetterly, you’re an idiot!  Pride and Prejudice and Zombies is insanely good. 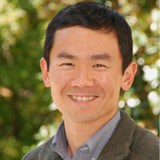 Jonathan Hetterly is a therapist, writer, and pop culture addict. He’s a contributor to The Shrink Tank podcast. Follow him on Twitter at @jhetterly.

NOTHING Comes at Night: How Hollywood is Outsmarting America