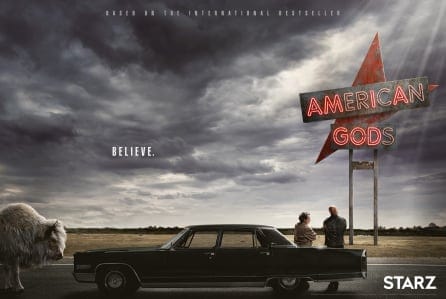 Vikings land on the rocky shore of what will one day be America. They are met with a hail of arrows that lets them know this is an inhospitable place. The wind dies and they are stranded with no way to return home. They appeal to their god, Odin, in every way possible, sacrificing their eyes, then each other until the wind picks up again. When it does, they hastily jump back into the boat, leaving behind a carving of Odin, who apparently stays behind and joins us later in present day America in the form of Mr. Wednesday (Wednesday translates from “Odin’s Day” in its original meaning), a con man who is hot on the trail of Shadow Moon, a felon who was just released from prison. Wednesday intends to enlist Shadow to work for him, despite the ex-con’s protests and refusals. 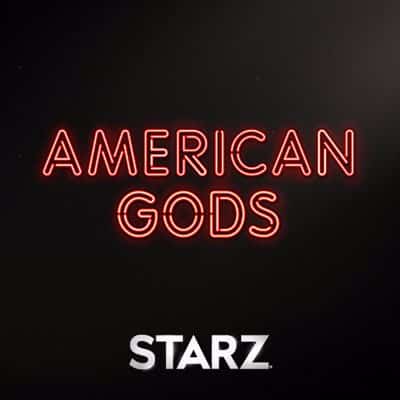 This is our introduction to the world of American Gods, a world where the gods of antiquity square off with our home-grown American deities. Based on the Hugo Award-winning novel by the legendary Neil Gaiman, the Starz series gives us no explanation of this new experience of the world under the world.  Like Shadow Moon, we are left to figure it out ourselves, but unlike other shows where the unwitting protagonist who is thrust into a strange new world seems bewildered and frightened, Shadow is a tough dude who isn’t shaken. When a hulking Leprechaun starts to fight with him, Shadow doesn’t shrink from the challenge. The two bloody each other in a classic barroom brawl.

After Shadow attends the funeral of his wife, he walks down the middle of the street in the dead of night. The street lights turn off as he passes. Something strange is afoot. He sees a small device in a field beside the road that leaps onto his face when he opens it, teleporting him into the limo of Technical Boy, a cocky, vaping personification of the Internet who insists on knowing what Mr. Wednesday is up to. When Shadow says he doesn’t know, Technical Boy orders his “men”—faceless thugs—to delete Shadow. They are ejected out of the limo and into the same field where Shadow found the device. The thugs pummel him and then lynch him, hoisting him into a tree with a noose. 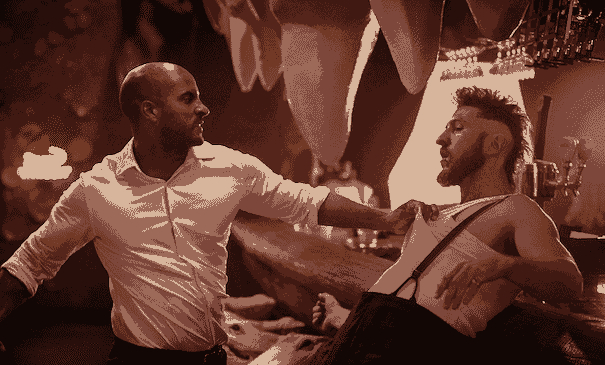 The rope snaps and Technical Boy’s thugs are massacred, much like the Vikings in the scene that opened the episode. Shadow lays in a field of blood, unsure of who just saved him.

It’s a crazy opening to what might be our newest television obsession. And that synopsis didn’t even include the craziest scene in the episode. That would belong to Bilquis, a goddess based on the Queen of Sheba, who literally consumes her mates during the act of sexy time.

As someone who didn’t read the book, I’m experiencing the series without any preconceptions of what it is or where it’s going. So far the opener provokes more questions and provides few answers, but you can see the setup between old gods and new gods unfurling already. We are on a journey with Shadow, Mr. Wednesday’s new Charge d’affaires and it promises to be a bloody, freaky ride.

The show sets up some intriguing psychological themes, including the idea that something is true or not true based on whether we believe it to be true, a notion that has especially resonance in our current culture. On the other side of this is the theme of deception, which is clearly depicted in the first episode. Individuals are deceived by others and by themselves. This exploration of self-deception will likely figure prominently in the weeks to come.

Equally timely is the broad theme of immigration, which also has rich psychological aspects. When immigrants arrived, they brought their gods with them, but now they are largely forgotten as their followers have assimilated. How we respond to immigrants and their cultures, as well as how we regard other traditions is an important part of the American Gods landscape.

The theme of death and our relationship to it is also central to the story. Vikings slaughter each other.  Shadow’s cellmate, Low Key Lyesmith (Loki) talks a lot about the need to return to hanging. Shadow’s wife and best friend are killed in a car crash just as he is to be released from prison. His dead wife haunts him. Technical Boy’s thugs are shredded. Shadow is hung from a tree. The inevitability of death, the steps we take to distance ourselves from it, and the impact of it will be a rich theme in this series.

And, of course, religion, faith, and belief are dominant parts of the story. In a vision, Shadow sees a buffalo (undoubtedly representing Americana) with fire coming from its eyes that tells him, “Believe.” The importance of belief is central here.

These and other themes will make for good discussion and will provoke much thought over the coming weeks. Come back each week to dig into them.

Ep.53: Colin Kaepernick’s Protest vs. Patriotism: Who Wins the Battle of Framing the Message?