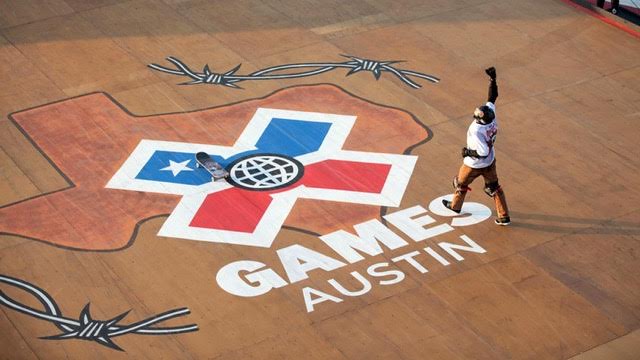 Since the summer of 1995, extreme athletes from across the globe have been coming together to compete against the best of the best on arenas built of concrete, dirt, and even air in the ESPN sponsored X-Games. In doing so, they have willingly displayed their death-defying maneuvers and mind-bending tricks for fans and anxious observers waiting to see just what “might happen” when something inevitably goes wrong. This summer’s X-Games, the last of which will be held in Austin, Texas, will continue to push the limits of what many believe athletes can accomplish within sports such as skateboarding, BMX, and motocross, among others.

X-Games athletes rarely refer to their sports as “extreme”, yet the label has unfortunately stuck as the default description since the early 1990s. While this label originally may have seemed appropriate for the casual viewing audience and even for the corporate suits in charge of marketing the X-Games, testimonials from the athletes tell a different story. Although their sporting environments may be unique to that of traditional sports, the goals of improving their athletic performance, increasing their athletic abilities, and competing against others are exactly the same. Thus, these athletes have a far different perception of their sports and any “danger” that may be associated with it, from that of the non-participant observer.

In fact psychological research which has examined the athletes of these sports has used descriptors such as action, lifestyle, adventure, or in some cases risk sports, all of which are more accurate labels. These describe the environment in which the athletes perform and acknowledge that there are obvious risks involved. Yet, they do not assume the athletes are taking “extreme” measures to defy death. When observers witness such legendary athletes as skateboarder Bob Burnquist (30 medals and the true originator of “big air” skateboarding) rotate continuously while 30+ feet in the air or motocrosser Nate Adams (19 medals) launch high in the air and whip a motocross bike around like a toy bicycle, these behaviors may seem like extreme and dangerous behaviors. However, the athletes themselves view them as more “calculated risks”. Why is this? Why does the typical X-Games athlete believe he or she can control the outcomes of such risky athletic feats? According to the research, the answer lies in their mental approach and the confidence they possess in their ability to do just that – “control the uncontrollable”. 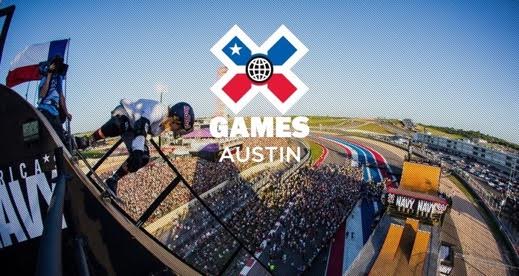 So, what exactly is the psychological profile of a typical X-Game athlete? Based on the available research, he or she is one who is drawn to the uniqueness of new and novel experiences, actively seeks out situations and activities that activate bodily sensations and arousal, and possess an extremely high degree of confidence to overcome adversity and deal with unpredictable situations. Typically, these athletes are highly extroverted, conscientious, and neurotic, yet ironically they also tend to avoid placing themselves in harm’s way. They often discuss the importance of establishing a connection with nature, which of course is the backdrop or arena for all of their sports, and benefit from how the thrill and excitement of their sports can help manage and regulate their emotions. Similarly to traditional athletes, the typical X-Games athlete also benefits from the use of mental skills, such as imagery, self-talk, and goal-setting, among others. Finally, they tend to have high perceptions of control within their sports, meaning that they believe they can actually dictate outcomes (landing tricks, overcoming adversity).

Which of these characteristics however are the most important in terms of understanding the “why” behind these athletes’ engagement in their sports? The answer may reside within the latter two; their heightened perceptions of control and their use of mental skills. Although X-Games athletes make their sports seem “easy” and their approach to them may appear “carefree”, there are actually many aspects that must be taken into consideration to achieve these perceptions.

For example, X-Game athletes must constantly maintain a heightened degree of concentration in order to execute their tricks. They must be diligent regarding weather conditions (wind, rain, etc.) and the maintenance of their courses (properly swept concrete, accurate angles of jumps and landings, etc.). They must be aware of their emotional states and any need to regulate or alter feelings of nervousness or worry, which may negatively impact their performance (doubt over successfully landing a trick) and or safety (failing to commit to tricks, maneuvers). Athletes are also often faced with trying rarely or never before attempted maneuvers and routines in dynamic competition environments which necessitates a high degree of confidence in their ability. This is especially true when engaged in sports in which the consequence of failure can be serious injury or even death (several top tier action/risk sport athletes have died within the past 12 months). These inherent risks require that X-Game athletes maintain their composure in stressful situations, are able to overcome fatigue or a loss of concentration, manage pain, and deal calmly with potentially life threatening situations.

So, how do these athletes then create perceptions of “control”? Often times they do it by being meticulous in their preparation. The stigma that has continually been associated with “extreme” athletes is one of having a “death wish”, a lack of respect for life, and a carefree or anything goes attitude. Although this is partially true of those weekend warrior type of action and risk sport takers or vacation want-to-be risk-takers (think of the bungee jumpers, zip line riders, and tandem skydivers on holiday in New Zealand, Australia, or any other tropical/exotic destination), experienced X-Game like athletes are careful to a fault. This distinction, between deliberate risk-takers and those who engage in preparatory risk-taking has been recently supported by research in the area of action and risk sport. Yet, the growing consensus is that these athletes are so consumed with reaping the benefits of participating in their sports (thrill, excitement, arousal, challenge, etc.) that they will take great lengths to ensure that nothing is left to chance while actually engaged in their sport. By preparing themselves as much as possible prior to participating, the athletes are better able to predict possible aspects of concern or risk, and create contingency plans to put into action if need be. 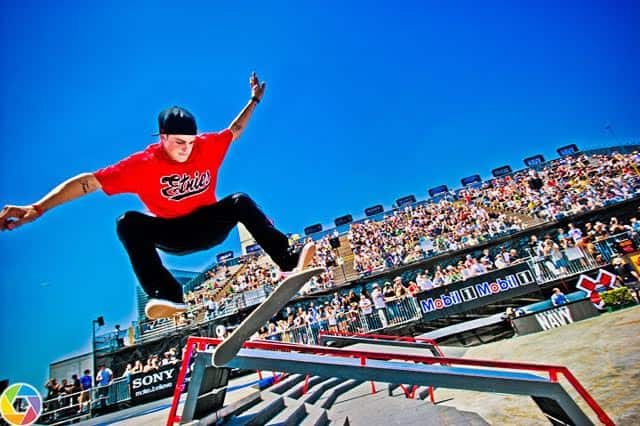 For example, there is a very good chance that Ryan Sheckler (youngest ever to medal at the X-Games at 13 years of age, 7 medals overall) will literally throw himself down a 10+ stair handrail or huge (either in terms of height or distance, or perhaps both) terrain gap during the men’s skateboard street competition. And, although during the competition this may seem adlibbed or spontaneous, there is a very good chance that he has sized up these tricks and practiced them a multitude of times (both physically and mentally in his head), so that he knows exactly when to ollie (jump with his board), begin to flip (rotate) his board, eye his landing, prepare his body (for the compression necessary from falling from such heights) for his landing, and identify exactly how and where he will fall if in fact he needs to. Even the falling is the result of years of practice – trust me, I know having skateboarded myself for over 10 years; falling is something that must be learned how to properly do. The point is, everything has been thought of and considered prior to the execution, and it is this type of preparation and attention to detail, which X-Games athletes depend on to increase their likelihood of success and minimize their risk of injury and or death. It is these types of behaviors that can boost the athletes’ confidence, and as such create a heightened sense of control.

The preparation however is not entirely a physical endeavor. There is definitely a mental aspect which also boosts the athletes’ confidence and their perceptions of control. Mental skills, such as imagery, self-talk, arousal regulation, and goal-setting among others have long been known to provide traditional athletes with an enhanced degree of performance and an edge over their opponents. Recent research into this area has confirmed that experienced action and risk sport athletes also use and benefit from these skills. The mental skill of imagery is often used by athletes to help mentally rehearse difficult maneuvers. The use of encouraging self-statements (“I got this”, “ I can do this”, “Commit”, etc.) can help increase confidence and motivation to land tricks. Additionally, athletes will often engage in pre-performance routines to help regulate their anxieties and emotions prior to beginning a trick or executing a run (a pre-planned series of tricks/maneuvers). The use of goal-setting has also been reported as facilitating individual athlete’s progression within his or her sport, as well as pushing the perceived limitations of what is possible within the sport.

For example, arguably the most famous and accomplished skateboarder ever, Tony Hawk, attempted the 900 (2 ½ rotational spin) ten times during X-Games competitions until he finally landed one successfully on his 11th try. Hawk has mentioned how landing the 900 was the last trick on his bucket list to accomplish as a professional skateboarder. Even though he attempted the trick only 11 times at the X-Games, there is no doubt that he “attempted” it hundreds if not thousands of times in his “mind” via mental imagery. These mental reps of “seeing” tricks landed successfully can build athletes’ confidence and provide them with the motivation to physically complete the trick. However, as is generally the case, the fans and viewers of the 1999 X-Games who saw him successfully land it, were witnesses to only the “tip of the iceberg” in terms of not actually seeing what went on behind the scenes to land the trick. This is just one example of how the use of mental skills is typically used by X-Game athletes to help them build their confidence and try these difficult and risky tricks.

So, the next time you turn on the TV and see an X-Games athlete throwing him or herself down a set of stairs on a skateboard or whipping a motocross bike violently around and over some obstacles, don’t allow yourself to buy into the preconceived notion that these athletes have a “death wish” or don’t value life, because trust me, they do! Instead think of all the time and preparation that they have undoubtedly engaged in to create a sense of “control” over the uncontrollable. Think of the diligence and mental fortitude that they have to possess in order successfully navigate their dynamic and ever-changing sport environments. And, most importantly think about the “calculated risks” that they willingly take in order to provide you and other viewers with a sense of joy, excitement, and amazement.

Action Sports and CTE: What We Can Learn from Dave Mirra