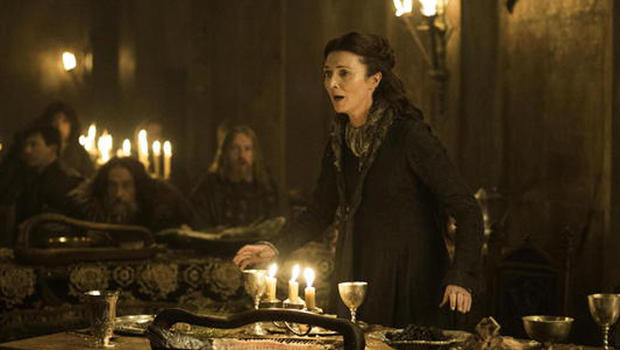 June 2nd.  The 153rd day of the year.  It’s I Love my Dentist Day, National Rocky Road Day, and, I kid you not, Yell Fudge at the Cobras Day, in North America.  It is also the fifth anniversary of the day that Misters Martin, Benioff, and Weiss ripped out my still-beating heart, threw it on the floor, and did a dance around it to an inspiring soundtrack composed by Ramin Djawadi.  Five years ago, on June 2nd, 2013, over 5 million viewers sat down to watch the 29th episode of Game of Thrones, “The Rains of Castamere.”

Who were we to know that, about one hour hence, our lives would forever be divided into before the Red Wedding and after, the psychology of television viewing having been forever altered? 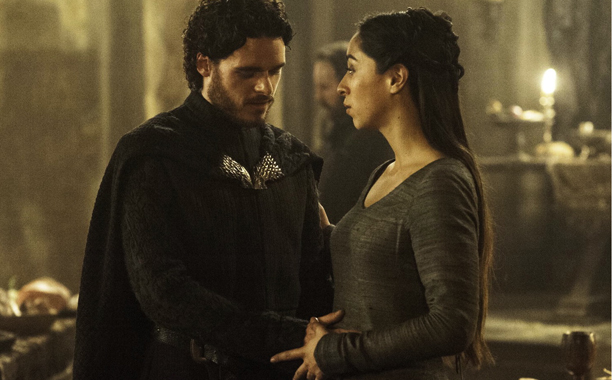 The episode opens with a familiar scene: Robb, the King in the North, seeking counsel from his mother.  You can hear the collective sound of stomachs settling and hearts smiling. No one likes it when Starks fight amongst themselves. They quickly move along to the reluctant Edmure’s wedding at the Twins, sharing bread and salt with Walder Frey, a representation of the contract that is guest right.

It’s a tense scene, made even more uncomfortable by the extended verbal ogling that Walder Frey subjects Talisa to, as Robb looks on, seething. It’s familiar discomfort, though. Who hasn’t white-knuckled their way through an awful wedding, watching the clock until the cake is cut and all are freed?  Every one of us willed Robb to bite his tongue, drink his wine, try not to glower, and leave the Twins with his dignity (and perhaps even his sister) intact.

It’s easy to forget that anything else of import happened during this episode.  In case you have forgotten: Bran wargs into Hodor; Jon heads back to the wall with several arrows in his body, courtesy of Ygritte; and Dany conquers Yunkai, with the help of new ally Daario.  We also get to watch the continuing adventures of Arya, and her mass-murdering, reluctant father figure, Sandor Clegane, a.k.a. The Hound.

We’re All in This Together

Although this particular episode was not the first televised event to get the live tweet treatment, it did represent a changing of the tides in how we share experiences across time zones and continents.  For the first time that I am able to recall, in the silence that enveloped our apartment as the credits rolled, my husband scrolled through Twitter, occasionally sharing a reaction or a meme. There was a sense we were connected to a vast network of individuals who could somehow put words and images to the emotions we were feeling.

We didn’t have to sit in our own isolated little pain bubbles; we didn’t even have to wait until people like me could pen a hasty, reactive blog post. Together, we experienced an intense, collective validation of our shock, horror, sadness, and dismay.

There’s a reason people are so drawn to television, to fantasy.

They represent a glimpse into a life that we wish we could live. They make order out of chaos.  They harness our collective belief in a Just World, and play it out in wondrous technicolor.  In the midst of our world in disarray, we can count on the bad guys getting their “just desserts.”

It may take a season, or two, or five, but we know that ultimately, good will triumph. 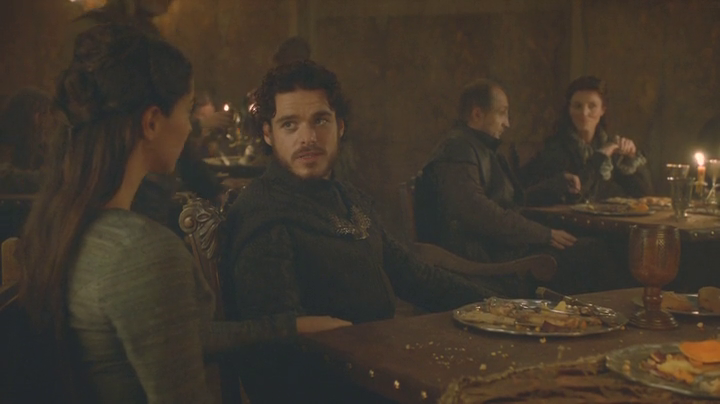 It was Ned Stark’s beheading in the first season that temporarily jarred us out of this fantasy cocoon.  Right up until his head rolled from his body, I, along with millions of others, assumed he would get that last-minute pardon. Not to fear, though– his gallant son took up the mantle, winning battle after battle.  Little Ned was safely gestating, a potent symbol that Lord Stark’s legacy would carry on. Order is restored to the Game of Thrones universe, right up until Talisa is brutally stabbed. Edmure’s wedding is over, and the Red Wedding has just begun.

Suddenly, art is imitating life too closely. People we love can die suddenly, and no one is coming to punish Lords Frey and Bolton. I imagine this is one of the reasons why so many viewers announced their intentions to stop watching; there were no more characters safe to love, no more places in Westeros safe to hide.

We Need a Hero

Ned Stark was a hero, with a hero’s all-or-nothing style glory.  He saw the world divided into two camps, good and evil, and fought his entire life for the side of good. Robb demonstrated every intention of following in his father’s ill-fated footsteps.

Post-Red Wedding, we are left with a motley crew of nuanced, flawed characters who are, in truth, much more realistic, and therefore much more relatable than the more archetypal heroes who preceded them.  Perhaps this is why very few ended up keeping their promise to completely disavow Game of Thrones.

Instead of continuing to watch idealized fantasy characters we wish we could be, we were left real characters who reflect who we are.

To prepare for this piece, I spent a considerable amount of time re-watching The Rains of Castamere.  I spent more hours saying goodbye to Robb, Talisa, Cat, Grey Wind, and countless Stark friends and allies than I care to revisit.  Perhaps most painfully, I watched over and over again as Arya bid a firm farewell to the last remnants of childhood she possessed. Now, if you’ll excuse me, I’m going outside, facing south, and yelling fudge at the cobras until writing this piece feels like the right decision. 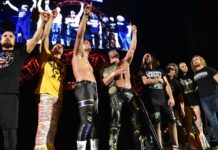 Double or Nothing: The Rise of All Elite Wrestling