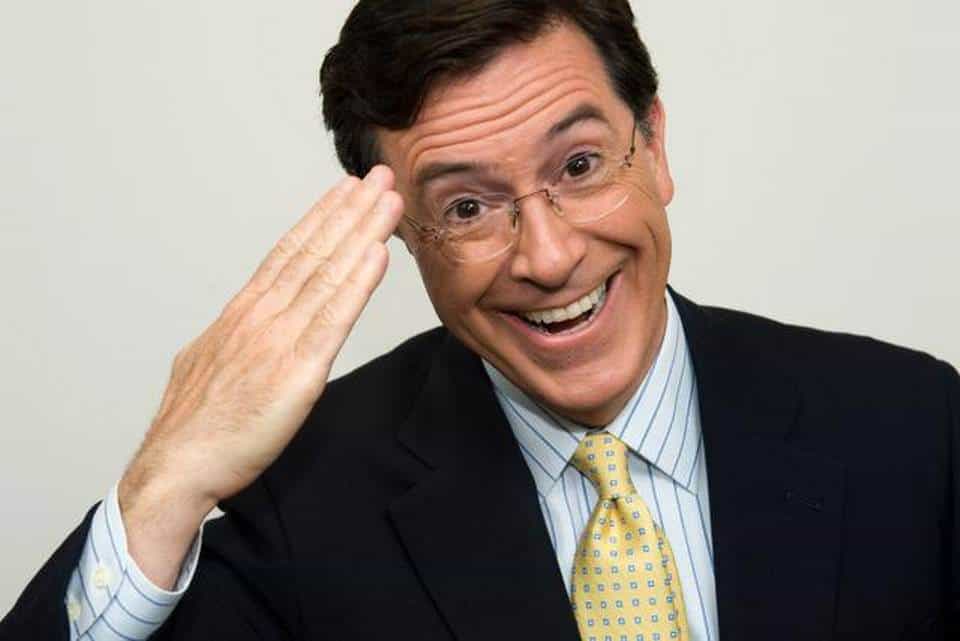 We’ve talked a lot about the new Golden Age of television drama, but as of last night, the new Golden Age of late night talk shows is officially in full swing. Stephen Colbert signed on with his version of The Star Spangled Banner, punctuated by an incognito Jon Stewart yelling, “Play ball!” Colbert trotted out onto the stage to be met by a roaring ovation, the likes of which we haven’t heard since Letterman himself debuted on CBS decades ago. Colbert and band leader Jon Bastiste danced and high-kicked as the applause only intensified and the crowd began chanting, “Stephen! Stephen! Stephen!” which has been a staple of audience participation with Colbert for years. 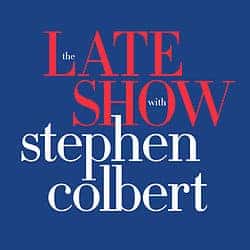 After everyone settled, he launched into a monologue that was funny, slightly nervous, but ultimately solid. One bit that worked well was having CBS CEO Les Moonves in the audience with a giant switch that alternated between “Late Show” and “The Mentalist,” the time slot filler during the gap between Letterman and Colbert. The idea was that if Colbert was bombing, Moonves would flip the switch to The Mentalist mid-show, which, as you might guess, is exactly what happened throughout the night.  Truth be told, though, the show never bombed.

After the monologue, they kicked to opening credits, which featured a miniature NYC and looks to be my favorite opener in all of late night. Colbert returned behind the desk with a tribute to his predecessor Letterman (and stage manager Bif Henderson!). Jimmy Fallon appeared on his set via video to wish him well, much the same way that Colbert appeared on Fallon’s debut to wish him well and pour pennies down his shirt. More on this segment in a moment.

He then showed off the newly refurbished Ed Sullivan Theater, which looks about as beautiful as anything on television. There was a funny product placement, many jokes about Donald Drumpf (natch), and the usual Colbert behind-the-desk banter.

George Clooney was the first guest and the obvious early conclusion is that Colbert is one of the best, wittiest interviewers in all of late night talk. No surprise there. A great moment, which honestly owes a debt to Craig Ferguson, is when they “realized” that Clooney had no movie or project to plug, so they had nothing to talk about and just sat there in awkward silence for long moments.

He had much to talk about when Jeb Bush joined him onstage. Like Howard Stern, Colbert has a knack for uncovering things about public figures that others can’t seem to touch. In a few brief minutes, we felt like we knew more about Jeb than we had in this whole election cycle, including what really motivates him.

The show wrapped with a musical number featuring Batiste and his band, Colbert himself, and a bunch of other celebrity musicians like Mavis Staples, Aloe Blacc, and Ben Folds. It was a fun, rousing way to end the first show.

In his debut, Colbert sang, danced, did comedy bit, top-notch interviews, and kept the whole slightly over-stuffed production together. 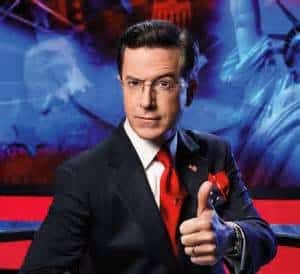 There’s no question CBS made the right decision in offering him the gig. Fallon’s appearance on the show and the general camaraderie of the current late night hosts signals not so much that they aren’t competing, but more that everyone intends to place nice. Fallon has ushered in the era of nice and Colbert, though more hard-hitting in interviews and biting in satire, is known as one of the most genuinely nice men in all of show business. These two are joined in their niceness by Kimmel, Conan, and Corden. Surprisingly, all this niceness doesn’t dilute the shows or make them less interesting. If anything, there is much more joy in late night now than there ever has before.

Colbert’s debut had a few obvious edits and cuts, there was the predictable first night jitteriness, and some elements of the show were a bit too long, but this was a really solid first night and one that already establishes Colbert as a welcome voice in network late night television. (B+)