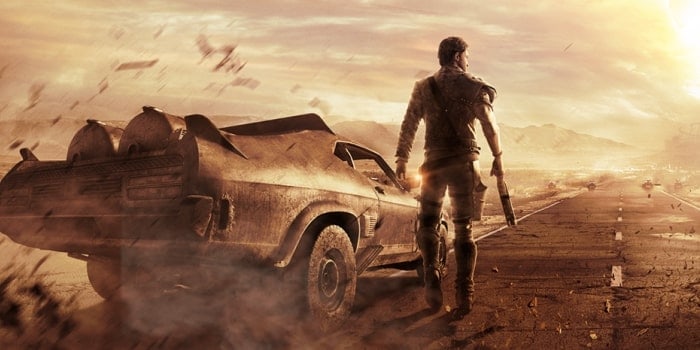 “I’m just here for the gasoline.”
– Max Rockatansky in “The Road Warrior”

*** SPOILER ALERT — If you’re of the appropriate age and have not seen “Fury Road (2015)”, then here’s what you need to do: (1) slam this computer to the ground (2) get into your retro-modified F100 death truck (yes, a Prius is fine), (3) drive to your local theatre and watch this film as aggressively as possible.

If you have seen it (and I’m assuming you have already sent George Miller a thank you note) then please continue to read.***

“Fury Road,” the fourth installment of the Mad Max series, was released this summer 30 years after its most recent prequel “Beyond Thunderdome.”  Despite the extended planning period, critics and audience members are raving about this film, while others are asking “is that the one where Mel Gibson has a dog?”  Here is a recap for the latter folks.  The series begins with an energy crisis in a pseudo-

dystopian Australia, leading Max Rockatanksy and friends (The Main Patrol Force) to face a bunch of gas-stealing land pirates (Acolytes motorcycle gang) who eventually give Mel what he loves so much — a thirst for unwieldy vengeance (best served crazy).   After savagely avenging his family, the new Murderous Max discards his former self (i.e., Supercop; #1 Daddy; Husband who sends flowers to his wife and makes her single coworkers jelly) and becomes what he needs to be: The Road Warrior.  At the helm of his supercharged V-8 Interceptor, he pushes deeper into the Outback, a now (seemingly) kangaroo-less wasteland of despair. From then on, the series sticks to the mold of a loner who just can’t seem to stay alone, defending the powerless from recyclable, fuel-mongering dysto-punks. 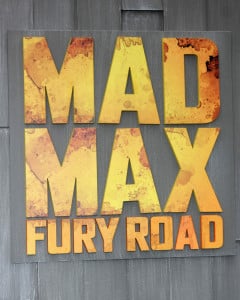 Now, although Mad Max may seem superficial to some (*cough* MY WIFE *cough*), there are actually some deep seated themes and ideas worth analyzing — themes revolving around survival instincts, caveman politics, parental and spousal relationships, planetary entropy, uncertainty of which murder-car is the most awesomest — that often go unappreciated.  Fury Road is perhaps most outstanding in this regard, rich with progressive feminist themes that challenge the traditional patriarchal agenda one might expect from a high-octane, male lead, violent, and Pew-Pew!! KA-POW!! soaked movie.  It was so unexpected to some “men’s rights activists” that they’ve decided to boycott the film.  Seriously.  You can check that out here.

That being said, I encourage my colleagues to investigate these themes in depth to foster progressive thinking and inspire greater social convention among blockbuster viewers. I, however, will be discussing something far less noble; something that I have wondered about ever since I watched Road Warrior 24 years ago. 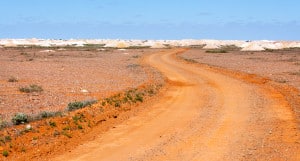 Even when I was 5, this didn’t make much sense.  In the new decayed and infrastructure-less Australia, there is a dreadful scarcity of water and food, but gasoline is seemingly more sought after.  Why?  By the way, we are not talking about a multifunctional hydrocarbon here; we are talking about “gazz-o-lean”, a substance that’s only real use is internal combustion.  Currently, gasoline is clearly important to the world.  Just shy of 400 million gallons of gasoline are used daily in the US alone for things like resource access and distribution, homestead latitude, Batman’s fire-doodles (those are your tax dollars burning, Gothamites); however, when you have no formal infrastructure, severely limited resources, no safe haven, no DC villains to intimidate with righteous fire bats, should gas be a priority?

The answer is a resounding yes, but perhaps not to the extent that is taken in the Mad Max universe; however, psychology may provide insight into their rationale.  Let’s consider the go-to model of dystopia analysis (i.e., Maslow’s Hierarchy of Needs) within the world of Mad Max and how it may affect behavior.

Maslow maintained that our most basic need is for physiological survival: shelter, warmth, food, drink, and so on. Once these physiological needs are met, individuals then are able to address the need for safety and security, including freedom from danger and absence of threat. Once safety has been assured, belonging or love, which is usually found within families, friendships, membership in associations, and within the community, then becomes a priority.  Maslow stressed that only when we are anchored in community do we develop self-esteem, the need to assure ourselves of our own worth as individuals. 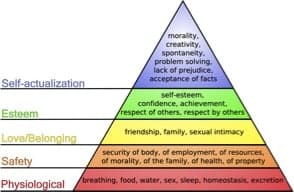 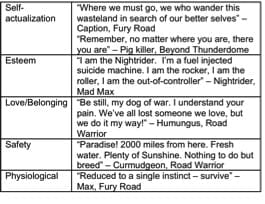 [mks_pullquote align=”right” width=”300″ size=”20″ bg_color=”#ffffff” txt_color=”#000000″]“…Within the chaos, there is one type of behavior that determines who lives and who dies: migratory behavior.”[/mks_pullquote]This is the basis for Maslow’s Hierarchy of Needs.  It should be noted that these needs are more interrelated than sharply separated, and the significance of these needs depends partly on one’s culture and individual priorities.  For example, every religion has a system of fasting, whereby the devout utilize the need for food and water (i.e., tier 1) to foster moral development and psychological insight (i.e., tier 5).  In general, starving and dehydrated people are not primarily concerned with self-improvement. This is why many therapists will initially act as a case manager to ensure that the client is well nourished and rested before engaging in psychotherapy.  Furthermore, these needs can be affected by trauma. For instance, consider a healthy child living in an industrialized country.  They would primarily fluctuate between tier 3 and 4, continuing on to tier 5 as they progressed into adulthood; however, if they experienced significant sexual or physical abuse, they may regress to lower tiers (i.e., physiological and safety needs), which may manifest as phobias and infantile behaviors (e.g., bedwetting).  In the Mad Max universe, everyone has experienced a global catastrophe and/or significant trauma, and has been forcefully displaced into the bottom of a shattered, poorly taped-together hierarchy of needs.  Although everyone may inherently yearn for love, self-esteem and self actualization, their inability to satisfy their basic needs, in addition to high exposure to severe trauma, has lead to some pretty quirky characters (e.g., Mad Max, feral child, Immortan Joe) and behaviors (e.g., chrome spraying, communicating with grunts, Thunderdome battles). However, within the chaos, there is one type of behavior that determines who lives and who dies: migratory behavior.

Imagine you are in Mad Max’s post-apocalyptic world.  Severe climate change has occurred. Temperature has risen and precipitation has changed drastically, causing some areas to be wetter and others to be dryer.  In a cruel tease of fate, evapotranspiration has increased, which means that even the wet areas don’t stay wet for long.  A decrease in water means a decrease in food.  Furthermore, murderous, predatorial foes stand between you and your physiological needs.  You are thirsty, you are hungry and you are in danger.  Do you look for food, water, safety or people?

What did you choose? 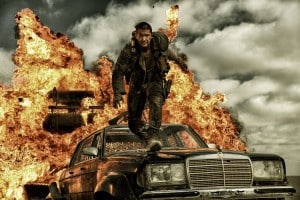 Maru (if you don’t know what this is, pick up your shattered computer and Netflix Star Trek ASAP), you either redefine and accept the problem as a no-win situation (which humans are not programmed to do), OR… you cheat (which humans are very much programmed to do).  I give you option five: look for efficient transportation as a means of acquiring food, water and safety. Look for gasoline, and migrate.

Max has survived because, as he stated in the Road Warrior, “I’m just here for the gasoline.”  He devotes all of his energy to staying mobile, fed, hydrated and safe.  To do this, despite thirst and hunger, he maintains enough gasoline to migrate from resource pool to resource pool and escape foes, never staying in one spot as to avoid competing for resources.  He appears to survive on Dinky-Di dog food, double headed lizards and bugs alone.  I know what you’re thinking.  What about all the wonderful endings? Here we go.  At the end of Road Warrior, the nearly destroyed villagers leave with a tanker full of gas to a supposed paradise.  The narrator (i.e., the feral child all grown up) spreads the legend of the Road Warrior so that Max will be remembered in history (as he opted out of “paradise”).  The feral child and other villagers are lead by a very, very Australian gyro captain with hopeful intentions of staying in said paradise.  Here is that pilot’s cameo in Fury Road. 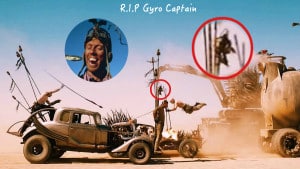 That’s right – a mounted skull on the blood bag vehicle. His/their mistake?  Like they had done at the oil refinery, they got too comfortable in one place — either their resources depleted before they could prepare properly for migration or they were killed by powerful foes (who likely had more gazzolean).  The same thing happened to Furiosa’s tribe, the Vulvalini, who stayed in the “Greenland” too long.  In Thunderdome, Master et al. and Aunty Entity et al. might have faced similar destruction, but this one’s a bit of an outlier.  I mean come on, they had airplanes, futuristic tech that converts pig farts into electricity, and Tina Turner singing the legit hit “We Don’t Need Another Hero”.  If Furiosa is not careful, the same thing will happen to her and her newly inherited community (which Max was wise to leave).

Oh, and to follow up on the “perhaps not to the extent that is taken in the Mad Max universe” regarding the importance of gas, here you go: 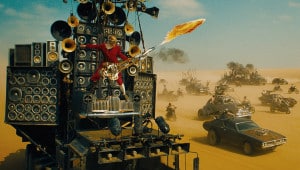 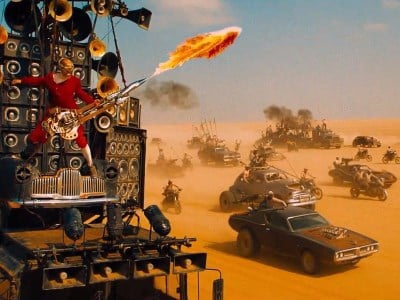