From the stomach-churning first episode until nearly the final moments, last season of The Walking Dead was about as fun as crawling over broken glass.

It was alternately joyless and excruciating. Negan’s murder of Glenn and the helplessness of Rick and the team drained the show of its vitality giving us a season without a hero and without much hope. There are plenty of people who’ve said they’ve tapped out (my colleague Jonathan Hetterly being one of them), that they are done with the show. I understand the impulse.

While The Walking Dead had been my entertainment highlight of the week, watching Season 7 had become a chore. Thank the entertainment gods for Westworld! Negan was played masterfully by Jeffrey Dean Morgan, but his total power over the heroes sucked the air out of the show.

In addition to the show’s best badass characters—Rick, Daryl, etc.—being rendered inert, the season was also a bit of a narrative mess with episodes set in disparate locations, often focusing on fairly minor characters.

So, given all that, why am I sticking with the show this season? Well, it’s not because I necessarily trust the producers. The early word suggests Season 8 will be a massive overcompensation for the drudgery of Season 7, which might make it more fun but not necessarily better.

The main reason is that I have become invested in these characters. Assuming the show lasts only another 2-3 seasons, I’m willing to hang with it to see some resolution. If it becomes clear it’s being milked, then I will bail. As good as the show has been at its peak, it is not a series that can sustain an audience for much more than 10 seasons.

At some point, we’ll all have zombie apocalypse fatigue. They need to stick the landing in a clear and compelling way. 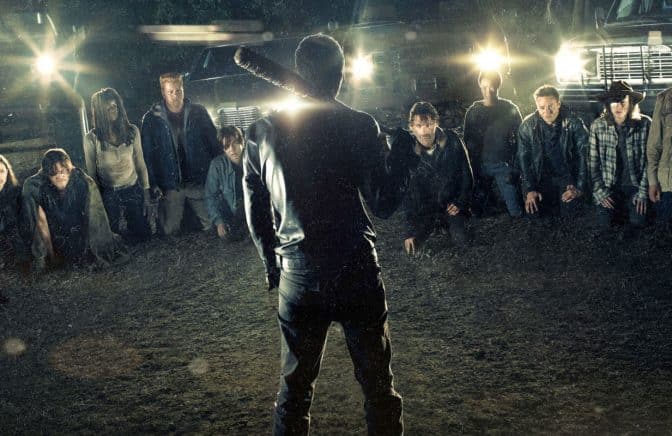 I regard Season 7 as a creative misstep, but also a singular plot point in a larger story.

If that’s so, then this is the “darkest hour” moment of the story where the heroes face (literal) death and hopelessness, then rise up and prevail. Regarding Season 7 as one plot point in a bigger narrative gives me the patience to stick with the series.

For The Walking Dead to work, there must be a sense of hope, a sense that the good guys will find a way out. That was absent in the past season, except for the final episode, which telegraphs the direction of the new season. If we think of Negan’s reign as an “all is lost” moment of the grand story, then it makes it easier to endure.

The Walking Dead has never been about zombies, of course. It’s been about people who must show the resilience and determination to find their way out of a world that has been lost and into a new world where they can start again. It would be a shame to leave them at their lowest moment.

Season 8 of AMC’s The Walking Dead returns on Oct. 22nd. I’ll be watching.