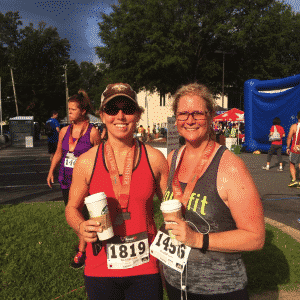 A few weeks ago, I ran my first 10k in a very long time. It felt great, and I have to admit I was pretty proud of my time, a personal record for myself. My goal at the beginning was merely to finish, so it felt pretty awesome to also out perform some of my past attempts at this distance. When I got through the finish line, I was given one of the larger medals I have ever received, and quickly headed to find some water. I had started the morning on the dehydrated side of things, and ended up feeling really dehydrated at the end of the 6+ miles. To my surprise, the water had run out, and all that was left was beer. Apparently, the draw of this race was the fact that they would have beer at the finish line, and my large medal was also designed to double as a bottle opener. It was an interesting twist on a sporting event, but I was a little perturbed that the only drinking option was frankly one of the last things I wanted at 8:30 AM.

It felt particularly deliciously naughty to be knocking back beer after grinding through 13 miles of running.

I first came across the beer-at-the-finish-line phenomena when I ran the Kiawah half marathon back in 2006. The entire post-race banquet was unbelievably decadent, but it felt particularly deliciously naughty to be knocking back beer after grinding through 13 miles of running. I can still remember the buzz of the accomplishment, which grew into even more of a buzz with each cocktail token. The challenge with pairing alcohol with athletics is that it can cause dehydration, and it is very easy to over-indulge when you are already feeling dehydrated by the workout. Many people also believe that beer can be a great way to carb-load prior to a race, but this is another myth- most beer has about the same amount of carbohydrates as half of a serving of bread or rice.

The beer and running association has actually grown significantly since my first experience with it, and we have several breweries in the Charlotte area that sponsor weekly beer runs and annual beer-themed races. I love the concept of the beer run, because it creates this amazing social outlet for grown-ups in Charlotte, and also creates an atmosphere where you can meet people who share a couple of interests. I have tried to use this as a means through which to engage my husband in running, but his bum knee has told me that it won’t happen anytime soon. 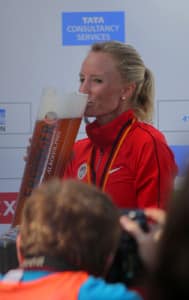 The celebration of the completion of an athletic event with beer creates a twist on the concept of rebellion. Rebellion feels pretty essential for identity development when we are young, but becomes increasingly more challenging with age. My nose ring was great (to me) when I was 19 but hasn’t fit most of the work environments I have found myself in since I graduated from college. I am painfully aware of the fact that I have little people who track my every move and often have to change my favorite song before the bad lyrics start. I like to wear band t-shirts to work on occasion, but I always run the risk of looking like I am trying to hard to connect with the adolescents. Why do we need rebellion? It feels good; it invigorates us, and when done in the right way, can help us from breaking some of bigger societal norms. One of the activities of Dialectical Behavior Therapy for problems with addiction is creating an alternate rebellion, a way of “being bad” while staying within what is healthy and good. Rebellion can provide a form of self-expression that allows for maintaining long-term goals, as long as the rebellion does not veer too far off from the norms of one’s position. For example, my current practice would probably not bat an eye if I showed up with a nose piercing, but it may get a different response from some of my referring providers. Running several miles and then drinking a beer seems like a fantastic rebellion, because it juxtaposes two very disparate activities. I just have to hope to stay hydrated, too.

The Positive Psychology of Beer