Home Articles CULTURE How Brené Brown and Bruno Mars Want to Change the World: “The... 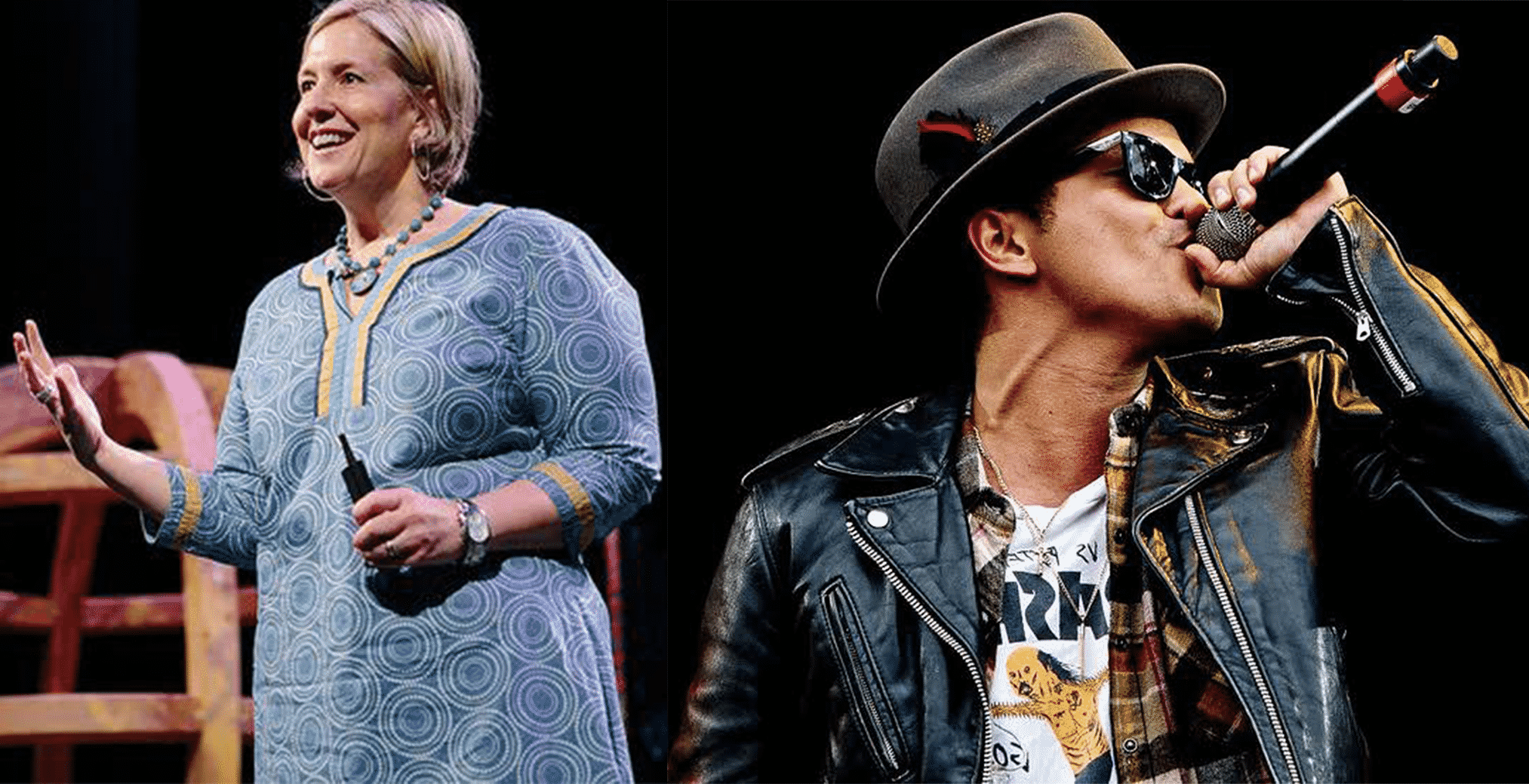 Can we just start with the revelation that Bruno’s real name is Peter?! Peter Gene.

That makes me chuckle. I love it. Okay, now we can move on…

It was a big night here in my hometown of Charlotte, NC on September 14! A lot of my friends were divided between going to hear Brené Brown speak and going to watch Bruno Mars perform.

Brené is an author and research professor at the University of Houston Graduate School of Social Work. Her research and books center around our ability to be vulnerable and our experience of empathy, shame, and connection. She is most well known for her TED Talk on the power of vulnerability. As a therapist, it is basically required that I buy into her work and truthfully, I totally am bought in. It isn’t necessarily that she’s saying anything new if you will, but couple all of the research she has done on human connection with her relatable, story-telling style and it seems to resonate with people differently. I have had many clients experience “aha” moments of clarity, validation, and encouragement in Brown’s words, and I’ve experienced this personally.

I saw her speak last year and she was hilarious and inspiring. She makes people truly feel like they can take risks and especially when you’re sitting in a room with a ton of other people wanting to receive the same message, you leave feeling like you all want to hug and high five and probably sing Kumbaya through tears.

For people who recognize their own mask they wear to hide their true selves and for people who value authenticity, Brown feels like a friend and a cheerleader and an advocate for intentionally living. I would’ve loved to experience her message this year in particular, though, during a time of such dissonance and injustice in our world that is way more palpable given the President in office and those whom he’s emboldened. Apparently, people left Brown’s talk not just wanting to sing Kumbaya, but being propelled to action — and for a group of mostly middle-aged white people (primarily women) to be invigorated or ignited in this way is a good, good thing.

What thrilled me to hear from friends who attended was that she didn’t leave room for interpretation at a superficial level. She went where those of us who sit in our (white) privilege needed her to go since there are many people who can only hear it from another person who looks like us. My friend Justin Perry (husband, father, social worker, tireless activist for African-Americans and other marginalized groups, co-chair of One Meck) shared this after attending Brown’s talk:

“Her ability to speak and challenge us all to see the humanity in each other even when difficult is a gift.”

Her ability to speak directly to the dehumanizing of African Americans to an overwhelmingly white audience and articulate the need for the movement for black lives; as well as the responsibility that her husband and male family members who wear khakis and polo’s have to confront the realities of Charlottesville was incredible. Her ability to discuss concepts such as shame, vulnerability, belonging, as well as standing alone from a clinical, as well as social justice manner, definitely speaks my love language.” 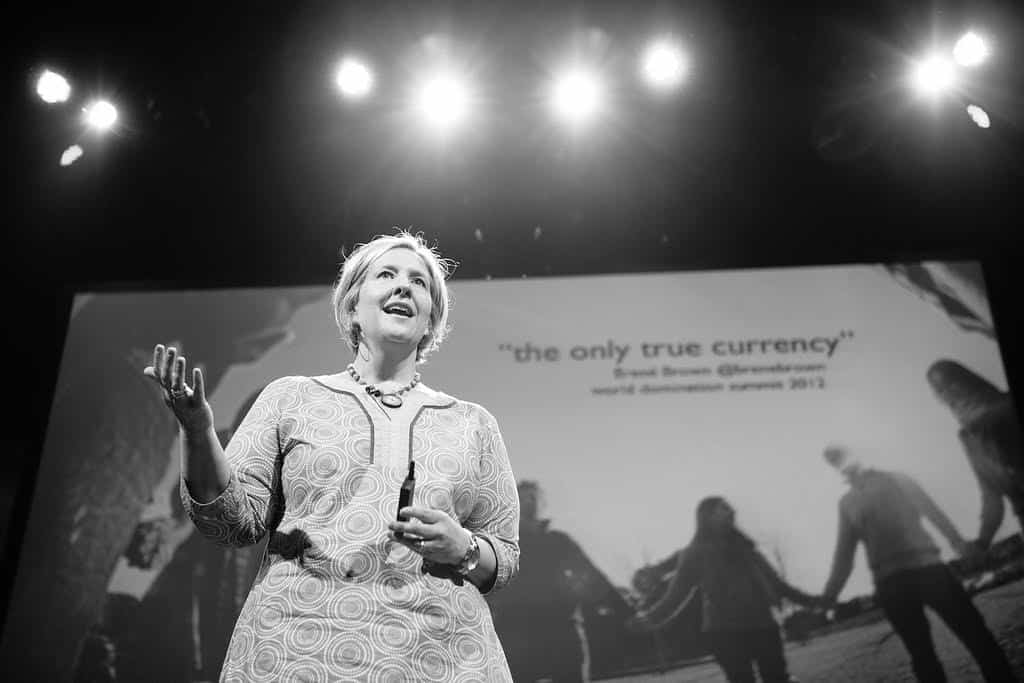 For there to be genuine and lasting change, those of us in the majority have to have awareness and acknowledge systemic racism and how we are complicit in perpetuating it. That in and of itself can feel uncomfortable and vulnerable and helpless, of course, but without each of us honestly and vigorously checking ourselves (and those around us) on this daily, we remain the problem. Taking the easy way out by staying quiet or inactive makes us complicit in the consistent injustice towards minority groups. Learning to tolerate the discomfort we might feel in our own self-reflection or in starting a dialogue with our peers or family members or in taking to the streets during a protest is the only way we will all belong together and move forward.

Brown’s latest tour and book, Braving the Wilderness, discusses what it means to belong in this age of increased division. Random House, her publisher, describes how Brown “argues that we’re experiencing a spiritual crisis of disconnection… [She] offers us the clarity and courage we need to find our way back to ourselves and to each other. And that path cuts right through the wilderness.”

But in a culture that’s rife with perfectionism and pleasing, and with the erosion of civility, it’s easy to stay quiet,

hide in our ideological bunkers, or fit in rather than showing up as our true selves and brave the wilderness of uncertainty and criticism. But true belonging is not something we negotiate or accomplish with others; it’s a daily practice that demands integrity and authenticity. It’s a personal commitment that we carry in our hearts.”

This is my segue to singer-songwriter, Bruno Mars.

He has done many interviews in which he has been very open and raw and non-apologetic for sticking to what he came for and not selling out (i.e. being his true self): “I’m here to do music. And I want to be able to look back and say, ‘Yeah, I did it the way I wanted to do it.’ Whether it triumphs or fails, I can live with that.” He has also discussed having to find his way when he moved to L.A. from Hawaii: “I only started writing songs when I moved up to L.A. because when I was in Hawaii, I never really needed to…But it stemmed from just learning that you have to do everything by yourself. It’s not like what you see in movies, where you walk into a record company and you’re given all these great songs to sing. You have to write the song the world is going to want to hear and play it over and over again. I learned that the hard way here in L.A.” (biography.com).

“You have to do everything by yourself.”

Isn’t that where it all starts? Of course, we all need our villages and are fulfilled by being that for someone else, but internal reflection and commitment is the root for each of us and how we are then able to show up for others, especially for those who are not heard as easily or are even disregarded. This is so desperately needed and nearly impossible when we don’t have a connection to our true selves.

In an Music nostalgia and the influence of live music is palpable and powerful and renders its own vulnerability as it creates experiences for people. Mars does this brilliantly. His performances and shows are evidence of him (and his band) having a blast and leaving it all on the stage. 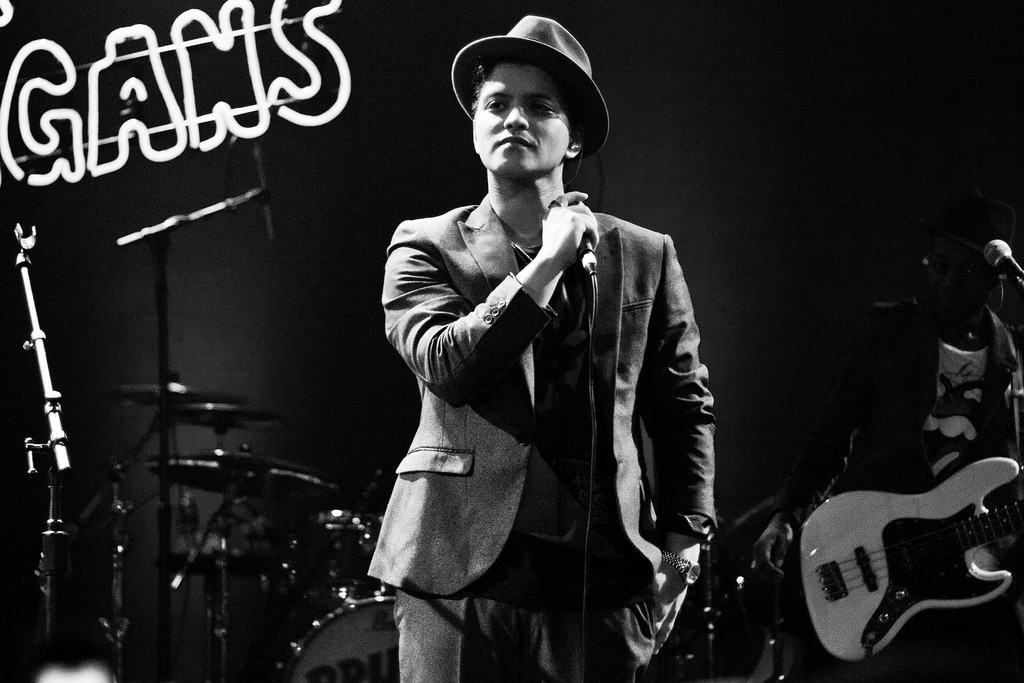 Leaving a piece of ourselves everywhere we go is how we each belong to the greater whole. What is the piece of yourself that you want to leave? As long as you are secure in your values and in doing what is right, that mark will be genuine and, if you’re lucky, perhaps you will even leave people wanting more. Or at least you will leave them changed in some way – whether it is in the way they think, in their mindfulness of their own implicit biases, or in the ways they’d like to grow.

This is the 24k magic of the potential of living in a just and equal world.

I chose to get my uptown funk on with Bruno this time around. I didn’t belong there. I absolutely belonged there. I danced like I’d rather be nowhere else. I looked around at yet another largely white crowd and prayed for an awareness, while we were entertained by this Boricuan and Filipino musician who doesn’t look like us, that we would take that feeling we had that night and carry it into our own personal wilderness: to “dance like no one is watching” by showing up, speaking out, fighting, resisting, spreading love. This week is the one-year anniversary of the Keith Lamont Scott shooting here in Charlotte, NC and the uprising that resulted.

“We need to continue to ask ourselves how we are braving our wildernesses to help address issues of racism, poverty, school segregation, and the housing crisis.”

Brown writes, “The wilderness is an untamed, unpredictable place of solitude and searching. It is a place as dangerous as it is breathtaking, a place as sought after as it is feared. But it turns out to be the place of true belonging, and it’s the bravest and most sacred place you will ever stand.”

We need to keep working and learn how to stand confidently in our own shoes so that we can stand (and dance) together.

What is the piece of yourself that you want to leave?