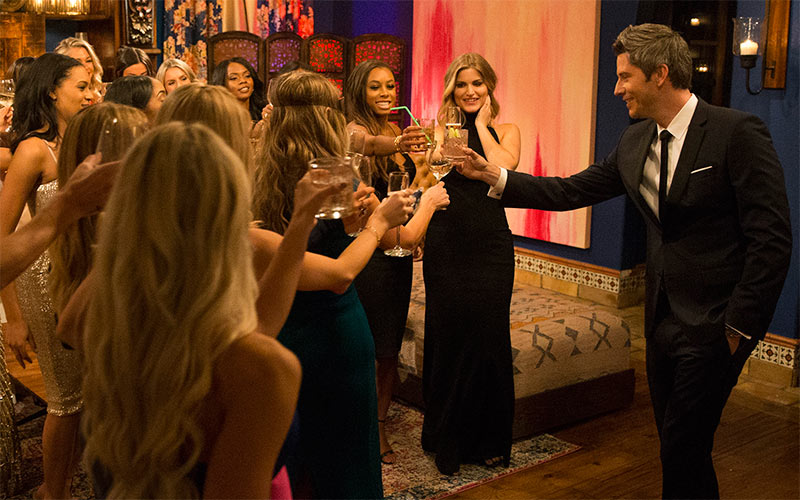 It’s officially week three of The Bachelor and the episode did not disappoint. This was definitely a defense mechanism/psycho-analyzing heavy week by the contestants of the Bachelor.

Lauren the Potterhead had shared earlier in the show that she has a defense mechanism of not opening up which perhaps she overcompensated for on her one on one with the Bachelor Arie by talking non-stop and not letting Arie contribute to the conversation.  The first red flag that the date was not going well was when Arie started eating food…GASP!

Never in the history of the Bachelor have they showed a couple enjoying the food in front of them. Generally the couple drinks copious amounts of wine while the food goes untouched. When they showed Arie stuffing his face while she went on and on, you knew it was the end for poor Lauren S.

As you can imagine no rose was given and she went home.

During this episode the group dates continued to be painful (literally and figuratively) for the girls as they fought each other as WWE wrestlers on one group date and were disastrous stand in dog show trainers on another.

Later in the episode Bekah the Nanny and Arie psycho-analyzed Arie’s dating patterns when Arie admitted for the past 5 years he was unconsciously dating women who weren’t ready for commitment of which Bekah M.’s insights blew his mind.  The contestants’ introspective abilities have been irregularly high this season compared to traditional contestants on the show who generally have zero insights to their destructive behavior which of course makes for great television. The episode ended with a dramatic rose ceremony (of course Chris Harrison announced there was only one more rose…thanks Chris) and Bibiana got sent home.

I think all of the bachelor fans are wondering how many phobias Annaliese the Designer has.  Were the producers complete sadists and planning to capitalize on Annaliese’s only two phobias?  Or does everything terrify her?

This will remain one of the shows’ greatest mysteries as she was sent home at the end of the episode. But the show may have historically peeked when Annaliese’s childhood dog fears were ridiculously re-enacted. The slow motion tiny beady eyed growling dog paired with scary violin music could not have been more hilarious.

Bibiana’s distress tolerance skills were tested this week when she set up a special couch and telescope for her and Arie. This was unbeknownst to Arie, so when he stumbled across the romantic set up with another girl he proceeded to make out with her on it. Ouch! With as fiery as Bibiana was last week, I thought she would have been throwing punches with the chaos this week brought.

Krystal the Yogi is quickly becoming this season’s villain.

At one point after Krystal had stolen Arie several times and was quite content with herself, she said “These girls are living in such a false reality.” Then, two seconds later, Bekah M. got the group-date rose. …You can’t make this stuff up.

It’s clear that a few of the girls are coming out ahead of the others. Bekah M. and Chelsea the Dominator seem to be pulling ahead of the ladies, while Tia the Razorback, Caroline, Becca the Publicist, and Krystal are not far behind.

In case you missed last week’s recap of Arie Luyendyk’s season of The Bachelor, you can read it here.

What ‘The Marvelous Mrs. Maisel’ Teaches us About Change