Home Articles TV + MOVIES The Handmaid’s Tale: Closer to Reality Than You Think

The Handmaid’s Tale was recently nominated for a well-deserved developing women.

The premise has always seemed a little far-fetched, until now.

The timing of Hulu’s adaptation of The Handmaid’s Tale is somewhat eerie, as political and social tensions are at an all-time high and the events that unfold seem like somewhat of a real possibility.  Today women, the LBGTQIA+ community, and minorities alike are in fear of losing their rights, their voices, and their dignity.

Americans watch in horror as foreign terrorist groups have taken over villages, cities, even countries and we hear survival stories of civilians who swim across oceans to seek refuge. We have seen dictators murder thousands of their people.  We know that women across the world are denied the right to education, choice, and are victims of rape and female genitalia mutilation.

Fear is at an all-time high, and The Handmaid’s Tale feels almost too relevant to the fears of many given our current political climate.

The Premise of ‘The Handmaid’s Tale’

If you are not familiar with the basic premise of the story, it goes a little something like this: In the not-so-distant future, the world is having a reproduction crisis.  Few, if any, woman are able to become and stay pregnant, and even fewer babies that are born end up surviving.  A wealthy and elite religious group of Americans have the idea to make reproduction a form of currency, and they stage a violent coup and take over power.  The nation is now referred to as Gilead.

The women who have borne children before are taken hostage as handmaids and are raped each month in a family religious ceremony in hopes of bearing the elite family’s children. 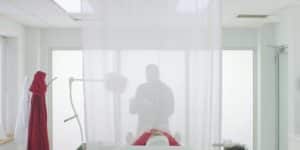 When the story is outlined so bluntly, it seems completely far-fetched.  Yet watching the scene unfold, it is terrifying just how possible this could really be.  And this is why The Handmaid’s Tale is resonating with so many right now.  Thanks to years of psychological research, we can explain many of the phenomena in the story and why it is more true to life than we’d like to believe.

Thanks to years of psychological research, we can explain many of the phenomena in the story and why it is more true to life than we’d like to believe. Social psychology helps validate that the violent and upsetting events of this story are in fact very possible.

The Psychological History of Obedience and Power

In Gilead, we watch as the handmaids carry out death sentences to dissenters with their bare hands.  The women know they will be beaten if they don’t partake in the cruelty.  We see doctors who remove eyes, hands, and even clitorises as acts of reprimand, even though they offer whispers of support to the victims behind closed doors. The keepers of the handmaids are the Aunts, and we see them viciously beat and ruthlessly dehumanize the handmaids under their care. How is this realistic? 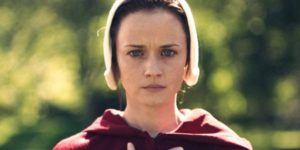 Before there were regulations protecting people during psychological research, a now-famous study on obedience was conducted by Stanley Milgram.

Milgram had subjects in one room using a machine to deliver electrical shocks to a subject in another room.  The subject giving the shocks could hear the person in the other room receiving the electrical shocks. This involved hearing their screaming, their pain, and their pleading for the shocks to stop.  The kicker? When an authority figure was present, 65% of subject continued to deliver shocks to the maximum level (the maximum level included when the screaming stopped so the subject believed they were unconscious or dead).

We also know from Philip Zimbardo’s prison experiment that power is intoxicating to people.  Zimbardo used subjects and assigned them as either prison guards or prisoners, and the guards were charged with maintaining control over the prison.  Within no time at all, the subjects who were the prison guards were abusing their power and finding ways to humiliate and punish the prisoners.  What was supposed to be a two-week experiment was cut off after 6 days because it had gotten totally out of control. 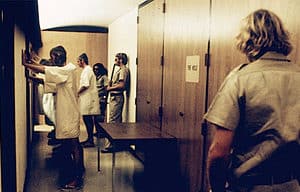 Humans are very vulnerable to be obedient to those in power and very susceptible to abuse our own power. So what happens when the threat of being killed and tortured is real because of those in power are terrorists.  The fear of losing our own life can certainly make most people willing to do unthinkable things.

This notion makes the atrocities of Gilead start to feel very understandable.

Watching the handmaids of Gilead, some of the women seem to find peace with their life of being held, hostage. For some women, this life is better than the one they previously knew. It is clear that many of the handmaids suffer from Stockholm syndrome. This is when hostages begin to have positive feelings and become attached to their captors.

We see one handmaid fall in love with the General keeping her.  It is a strange psychological phenomenon, but one that is witnessed in many real-life cases such as the kidnapping of Elizabeth Smart.  The other important phenomenon occurring is with the wives of the generals, who are all educated, smart women who have now lost their voice and have to watch their husbands rape the handmaid in the family ceremony. This would have never seemed realistic but is actually completely understandable with the help once again of Stanley Milgram and his research in psychology. 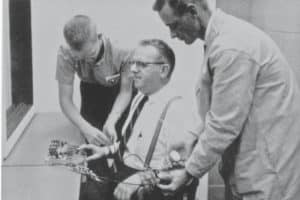 The term ‘ideological justification’ was coined to explain how people can justify their actions because they are required or supported by their belief system.  These wives were involved in creating the master plan for this coup.  Because they share the belief that what they are doing is not only right, it is moral, they justify participating in their husbands raping their handmaids.

The brilliance of Hulu’s The Handmaid’s Tale is found in making us believe that this terrible turn of worldly events could actually happen.  They allow us to feel the tension and fear growing in their world and then show us how vulnerable we are all to the decisions of those in power.

It is not researched, but history that gives us the proof that this is not science fiction.

The crimes committed by the new government of Gilead are eerily similar to the strategy and propaganda used by Hitler. We saw how an entire country turned on a group of people, and what happened to the Jewish in Germany is exactly what happened to all women in this tale.

The loss of power for women and the general public is a slow and confusing at the beginning. It starts with women being called whores as they walk down the street, and being denied service at restaurants. Then one day, all women’s bank accounts were frozen, they were fired from jobs, all without explanation as to why and no power or control to affect help.

The acting by Elizabeth Moss and Samira Wiley is superb, and you can feel the fury and terror as they stand helpless, trying to piece together why their safety and value are plummeting. As protests began in the streets for people to raise their voices, armies took to the streets and began shooting the crowds with machine guns.  Next, the entire government was taken out in a matter of minutes.  This was possible because a group of power hungry people with a lot of money and weapons destroyed democracy.  America’s worst fear realized. 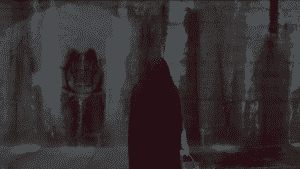 While this story plays on our fears to rope us in, I believe the real reason it is being met with such acclaim is that it also plays on our hopes and desire for good to overcome evil. No matter how dark each episode gets, there are little bright lights of hope flickered throughout and it just feels exciting. The last scene of the episode Nolite te bastardes carborundorum is one that powerfully played on our emotions of hope, justice, and humanity. After watching the women struggle to not lose their sanity and their lives, we see them band together and hope is finally born.

It was hard not to stand up and cheer when the handmaids strut down the street united together with their new inner mantra, “Don’t let the bastards get you down,” to the backdrop song “Don’t You (Forget About Me)” by Simple Minds. This image of women rising strong and brave walking down the street has so many similarities to the recent March of Women where we saw millions of women marching around the world.

This theme of the resistance or rebellion that we love in Star Wars and other movies is actually playing out in many everyday lives and so it hits home, hard. When we can sit back and watch it dramatically play out on television it gives us goosebumps and hits deep cords to make us feel connected to a bigger cause of justice in real life.

Hulu’s The Handmaid’s Tale is a roller coaster of emotions to watch, and if you have not seen it yet, do so. It is a must see. While this very real tale of terrorist state can make us fearful, I think most will end the season feeling the power of people. Hulu has signed on for a second season, which is very exciting because the first season followed the entire book very closely and so where the plot goes is now is unknown. We hope that the writers rely on psychology to make sure the story is real enough to keep us captured and questioning our own values.