From a psychological perspective, it’s marvelously impressive that Mrs. Maisel—AKA Midge—is able to break out of all the socially constructed norms to become her true self throughout the first season.

With the second season of dealing with change. This article is full of spoilers so if you haven’t finished the first season now would be the time to stop reading and obviously go back and finish it because it is so…. marvelous. 😉

Season one begins with Midge appearing to be “the perfect” 1950’s wife—bribing a comedy club owner with pot roasts in exchange for her undeserving husband’s opportunity to do standup, writing his jokes for him, and even going to bed with makeup on, waiting until her husband is asleep to take it all off, before waking up before him and putting the makeup back on. Sounds exhausting, right?

Midge appears to be crushing the housewife scene—so you can imagine her dismay when her husband suddenly leaves her and their children for another woman.

As a result, Midge gets wasted and finds herself under the lights and behind the mic for her own go at standup. Even though she is arrested for lewd language and indecent exposure (…long story, just watch) she discovers that her true passion and destiny isn’t just being a housewife— it’s doing stand-up comedy.

Not a very secure future career, considering the sparse amount of women in the industry. Nevertheless, Midge pushing back on her anxiety and begins carving out a comedic path for herself. Throughout all the ups and downs of the first season, Midge is able to overcome the expectations of not only her family but society and finds a way to feel comfortable with the uncomfortable.

Midge is able to overcome the expectations of not only her family but society and finds a way to feel comfortable with the uncomfortable.

Can you imagine making this sort of transformation?

Midge goes from one day being a housewife with very clear expectations and the next day a standup comedian. Most people who would like to make a drastic change in their own lives don’t because it’s too jarring, uncomfortable, and they can’t imagine daring to different like Midge.

Why is that? What makes the rest of us so hesitant to change?

It turns out that uncomfortable feeling that stops most people from changing is called homeostasis. It’s the urge to put things back to the norm in a system that has been changed. The system can be an individual, family, group of friends, etc.

The following might sound familiar: Anytime you try to change something minute about yourself that is out of character you feel strange. Your friends and family see the change too, and they make comments about the new you (positive or negative comments can both be anxiety-provoking). Turns out that 9 times out of 10 you bail on the change and revert back to the norm because changing was too uncomfortable. This is the process of homeostasis.

It turns out that uncomfortable feeling that stops most people from changing is called homeostasis.

The Marvelous Mrs. Maisel is a great example of this. At first, you can clearly see that Midge is uncomfortable lying about being arrested, bombing shows, and she literally reinvents herself by choosing different stage names with each stand-up performance.

At the same time, she is battling the internal struggles brought on by her mother and father’s adverse reaction to her getting a job and embracing her independence. These reactions reiterate the presence of homeostasis, seeing as how her parents are completely aghast by her life changes instead of deferring back to their rules once she moved back in with them. You even see this evident with Midge’s ex-husband, Joel, who is horrified to see his ex-wife doing standup; especially since that was his dream, not hers.

By the end of the season, Joel fights a man hackling Midge, signifying that he too has adjusted to Midge’s new role. Many people in this situation would attempt this new identity for a day or two, but the discomfort would drive them to would give up and defer back to who they were originally.

But not Midge. No, she pushes back and holds tight to her new life, despite its hardships. All of this strife within herself and from her family is homeostasis.

The topic of homeostasis is poignant now that the end of the year is quickly approaching.

There are so many people who set New Year’s resolutions—whether it be to lose weight, stop smoking, go back to school, move, change their job, switch from being emo to hipster…oh, whoops, that was one was mine… At any rate, the list goes on and on.

Most people fail at these intentions because of homeostasis.

People start the process of change, but when it gets challenging and the anxiety from the homeostasis gets to be too much, that’s when they will default back to their norm. Think about this: How many people successfully quit smoking but inevitably have a cigarette out with their friends?

Most people fail at new year’s resolutions because of homeostasis.

Let’s pretend you are that person. Inevitably your friends notice and say “Hey why aren’t you smoking tonight?” You say, “I decided to quit for a New Year’s resolution.” Your friends say something similar to congratulations and the conversation moves on—but during that small exchange a lot has happened:

1. You now really want a cigarette, because you are still addicted (this process of addiction has nothing to do with homeostasis and is a physiological response, but none the less is hard to overcome).

2. You are now uncomfortable with your new role and have thoughts like “Who am I if I’m not smoking? What do I do to fill time when I feel awkward? Smoking was actually a great way to have great one-on-one conversations with other smokers and to get outside to a quiet place. Now I feel left out.” Cue your personal anxiety of homeostasis.

3. Your friends have noticed the change and although they may be happy with your new healthy decision, a part of them feels sad because you were their smoking buddy. Another part of them could even be jealous, or secretly hoping you fail. After all, if you succeed, then that means maybe you are a stronger person than they are because they probably have tried and failed to quit smoking several times in the past. Cue their associative anxiety of homeostasis.

After all, since this has gone on in a matter of seconds you may or may not cave and have a cigarette.

People start the process of change, but when it gets challenging and the anxiety from the homeostasis gets to be too much, that’s when they will default back to their norm.

The key to successfully changing is overcoming the anxiety in your own system and your external systems. Who knew so much is going against you when you try to make a change?

If you can increase your distress tolerance by anticipating and acknowledging your and everyone else’s anxiety—and persevere three or four more times—then not only do you get used to it but everyone around you accepts this is the new norm and the anxiety in the system settles down. In that example, if the person who tried to quit goes out with the same friends 4 or 5 more times, that person will become the new non-smoking friend and a new homeostasis is established.

Keep this in mind when setting your New Year’s resolution and expect homeostasis will kick in, just like in The Marvelous Mrs. Maisel. After all, Midge proves that expecting anxiety is a large part in succeeding in the battle of change.

To see how Midge handles more anxiety and homeostasis, tune in to season two of The Marvelous Mrs. Maisel, available now on Amazon Prime Video. 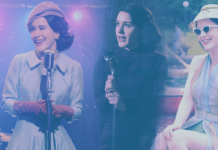 Tips Up: 3 Life Lessons from ‘The Marvelous Mrs. Maisel’