There is a painful truth that 16 years of evidence forces me to acknowledge: Tom Brady is a beast.

But first, let me backtrack…

For some odd reason, my apartment came adorned with a large mirror positioned adjacent to my front door. I pass this mirror every time I leave for work, often giving myself a quick glance to ensure the absence of any lingering toothpaste smears or stray facials hairs from a hasty morning shave. The morning I started writing this piece, however, I gave myself an inordinately long look.

How could I, a devoted Washington Redskins fan, possibly produce a laudatory piece on Tom Brady with any degree of sincerity?

He knows how to win, overcome the most daunting adversity, silence critics, and stay rigidly focused on the task at hand. Few people possess Tom’s athletic ability. Even fewer people possess the psychological traits necessary to translate mere ability into perennial success. So what are these traits I speak of?

Before I dive headfirst into a description of these traits, it is important to discuss what I mean by “traits.” It is easy to view traits as an all-or-nothing, dichotomized construct that either “ya got it or ya don’t.”

Instead, I like to think of each trait representing its own broad dimension, whereby different positions along this dimension reflect different levels of that particular trait. It should also be noted that this is by no means an exhaustive list. Tom Brady possesses numerous other traits far beyond what can be covered in this piece.

With that said, let’s take a look at four specific traits that come to mind for me.

Wait, impulsive? Yes, your eyes do not deceive you; you read that right. The word “impulsive” has come to possess such a negative connotation, and for fairly good reasons. The word “impulsivity” or “impulsive” is listed literally hundreds of times in the Diagnostic and Statistical Manual of Mental Disorders as a symptom of various forms of psychopathology.

In reality, impulsivity is a diverse and multifaceted term that has been imprecisely defined in our field for years. For our purposes, we will narrowly define impulsivity as one’s thought-to-action ratio. In other words, impulsivity is the extent to which one deliberates the potential performance of a behavior before that behavior is executed.

“Impulsivity is the extent to which one deliberates the potential performance of a behavior before that behavior is executed.”

As we can see, neither extreme of the dimension is a fun place to be.

Alas, we have Tom Brady. Tom Brady’s trait level of impulsivity is right at that dimensional “sweet-spot.” Tom Brady appears to have that perfect balance of being able to think quickly on his feet while also taking just the right amount of time to ponder the potential consequences of his actions. 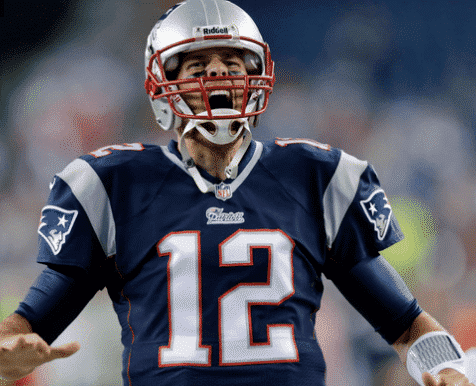 If Tom Brady were to spend too much time deliberating his potential actions on the field, he would become a flat pancake on the gridiron within seconds.

Alternatively, and as we see with many quarterbacks, if Tom Brady simply acted without any thought, well…let’s just say that he would have to go to Jared’s to up his ring game. Underlying Brady’s adaptive level of impulsivity is his extraordinary processing speed. For an NFL quarterback, processing speed refers to one’s ability to quickly scan and sequence visual information.

“If Tom Brady were to spend too much time deliberating his potential actions on the field, he would become a flat pancake on the gridiron within seconds.”

There is no question that Tom Brady is able to process the flurry of visual information (e.g., defensive positions, routes, etc.) at an exceptional rate, and use this information to guide his decision-making process.

Next, we have resilience.

Like many psychological traits, resilience is both multifaceted and multidimensional.

When it comes to sports, we shall define resilience as simply one’s ability to effectively navigate adversity. There is no question that Tom Brady has faced countless instances of adversity throughout his professional career. Fresh in our minds is the epic Super Bowl comeback of 2017.

He knows how to win, overcome the most daunting adversity, silence critics, and stay rigidly focused on the task at hand.

A large part of resiliency involves the ability to critically study the nature of the adversity and subsequently adapt your behavior to overcome the adversity. Tom Brady is a master at constantly adapting his playing style in accordance with the situation at hand.

“A large part of resiliency involves the ability to critically study the nature of the adversity and subsequently adapt your behavior to overcome the adversity.”

I’m not sure what took place in the Patriots’ locker room during half-time of last year’s Super Bowl—I was too busy listening to Lady Gaga telling me that I can’t read her ‘poker face.’

However, I’m willing to bet that Tom Brady spent his halftime meticulously pondering how he would adapt his playing style to overcome Atlanta’s stifling defense.

We all know how that turned out in the second half.

Tom Brady welcomes adversity like I welcome a gift card to a Chinese food buffet: with unwavering zeal.

Last but certainly not least is Tom Brady’s self-regulatory ability.

Self-regulation refers to one’s ability to regulate their internal dispositions including emotions, thoughts, and arousal. There is no question that football is a game of intense emotionality for both the fans and the players. Let’s take stress as an example.

High stress has been shown to have a strong correlation with many adverse medical and psychological effects. However, not all stress is bad.

In fact, having a mild level of stress can actually be quite helpful. Consider a mild amount of stress as fuel that drives us to succeed. As a personal example, when I was preparing a major exam in graduate school, my stress was the fuel that powered my desire to study. The point is that we have to effectively manage our stress so it can aid, rather than interfere with our goals.

“Not all stress is bad.”

Tom Brady is able to keep his stress at a level that fuels his fire as opposed to interfering with his game. If you watch tape from the third quarter of the super bowl last year, Brady is focused, calm, cool and collected.

Tom Brady is able to effectively regulate his emotional experiences so they facilitate rather than hinder his success as a quarterback.

It will be hard to look at myself in that mirror again as I walk out my door tomorrow morning. It’s painful to have to acknowledge Tom Brady’s strengths—whether they are his athletic or psychological strengths. While I’ll still be the one yelling for Tom Brady to fail when he plays my Redskins, I’ll also be the one thinking to myself, ‘gee, I sure wish I had more of his strengths.’