February 11th, 2016 — Two friends sit at a coffee shop table discussing the results of the New Hampshire Primary and how crazy the winter weather has been. A girl is conversing with her Uber driver about his thoughts on technology revolutionizing the service industry and the costs therein. A lonely old curmudgeon flips through TV channels in his recliner, coming across a preview for “another confounded superhero film!” opening tomorrow. He flips back to the coverage of the war.

February 12th, 2016 — World peace has been achieved! Global warming has been resolved! Respect and love exists universally between everyone! Divisive differences have been replaced with empathy and understanding! But how?! HOW?!

Deadpool. That’s how. Only the release of the greatest movie about the greatest superhero of all time possesses such Wild-Stallions-like properties, and I say this without the least hint of bias. 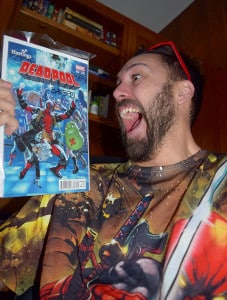 OK, full transparency, I may be biased. But still, the fact that we are finally being treated to an appropriately rated-R Deadpool to clean up the malodorous mess from Wolverine: Origins is a godsend. The “merc with a mouth” deserves more, and I deserve we deserve the merc with the mouth.

But who is Deadpool? In a nutshell, he is a semi-immortal anti-hero with an unbeatable health regeneration factor — the hideous remains of a Weapon X cancer patient, Wade Wilson — who takes on mercenary roles that lead him to hilarious, violent adventures in both the Marvel and DC universe. He is notorious for his dark, impulsive actions, mental instability, violent and romantic tendencies, and exceptional fourth-wall breaking humor in the face of trauma and adversity. On the surface, he may appear to be a murderous jokester without a care in the world, but in actuality, he is a walking tragedy, designed to be bad while hopelessly yearning to be good.

This is why I like Deadpool — he is the paradoxical portrayal of the internal struggle within many of us. Many people feel “bad” or “broken”, whether it be because of something within them (e.g., mental illness) or something experiential (e.g., abusive childhood), but aspire to be better — something more than a product of their trauma or weaknesses. However, when painful memories and condemning self-judgment become too great, aspirations of self-improvement and fulfillment begin to feel hopeless, like running in tar, or counting tears in the rain. Personal achievement, then, requires healthy coping skills to overcome the past and resiliency to break through future obstacles. This leads us to the defining trait (and coping skill) that makes Deadpool so extraordinary in the comic book world: his sense of humor. Here is how he describes it:

“When you’re confronted with a horrible situation, there are only two reactions that make sense: laughter and tears. And laughter, after all, is nature’s anesthesia. Tears hurt too much”

As it turns out, research strongly supports this statement (which we will get into in a bit), but first, let’s consider why Deadpool is the perfect spokesperson for humor-driven resiliency. Here are the top 6 woes and tragedies that helped developed Wade’s exceptional sense (and use) of humor.

A recurring theme in the Deadpool comics is a lingering presence of mental illness, such as schizophrenia and depression. We have seen Wade struggle with schizotypical thinking, audio and visual hallucinations, memory problems, major depressive episodes, and a pervasive, mildly depressed mood underlying his comedic ficade (e.g., dysthmia). Notably, these issues do not appear to be solely due to the artificially enhanced neurocellular regeneration — some were present during his youth, as well as when he briefly loses his regeneration abilities. In other words, Wade has struggled to understand and regulate his thoughts and emotions his entire life. For some, the grief that accompanies this instability and sense of abnormality can become absolutely debilitating. Furthermore, because of his rapid neurocellular regen, he is unaffected by substances (e.g., alcohol, ketamine), including psychotherapeutic drugs. Therefore, medicinal treatment is a hopeless endeavor. Ba-boom-chh! 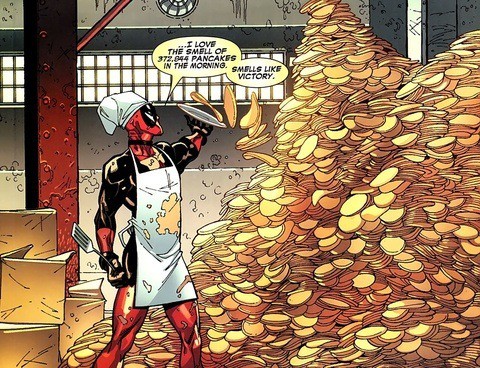 As an adult, Wade Wilson was diagnosed with terminal brain cancer. Receiving such a diagnosis is almost always accompanied by depression, anxiety and fear (Pirl, 2004), in addition to other physical and mental tolls. Furthermore, although Weapon X augmentation prevented his death from cancer, he still has cancer! In fact, all of his cells have become cancer ridden, but because of his rapid healing factor, new cells are rapidly grown to buffer the cancerous effects. This leads to him becoming an increasingly insane, horribly disfigured wretch. Ba-zing!

OK, this may seem like an awesome thing, but it ISN’T! Can you imagine the consequences of such longevity? You are forced to bereave the death of everyone you know and love, including any children you may have. You experience the ebb and flow of humanity as a hollow spectator that becomes increasingly distant from the mortal experience. I mean think about it — Dracula, Highlander, Wolverine, Thanos — these are not happy people. Deadpool frequently pursues death (e.g., taking deadly serums, having Hulk tear him apart) and lingers in suicidal ideation, despite being virtually unable to kill himself. In fact, like Thanos, Deadpool LITERALLY falls in love with death as she does with him. Every day he wants to die, and everyday he must face the cruel curse of immortality. That’s my momma!

4. His Childhood Was ROUGH

To say that Wade Wilson had a dysfunctional family life would be like saying that meth addiction kind of ruins your teeth/face/life. Granted, because of his memory problems and some instances of villains tampering with his memory, it’s hard to know exactly what his upbringing was like, but we do know that it is one of the following:

Whatever the truth may be, he learned from an early age what it’s like to lose or be worthless to those who should value you the most, that humans are unreliable, and that survival depends on selfishness and ruthlessness. At 17, he became a wandering, family-less mercenary. Oh brother, NOW she tells me!

5. His Love Life (Romantic and Platonic) is Abysmal

Deadpool’s love life is like something out of a shakespeare story, if said story was edited by the Cure and produced by Quentin Tarantino (immediately after losing his NanNan). Despite having experiences that might otherwise lead to crushing attachment disorders and total isolation, Deadpool frequently attempts to love and be loved by others (including bromances like with Spiderman). This doesn’t seem to be something that fate will allow, however. Some examples of his heartbreak:

It seems that the only consistent, positive relationship Deadpool can maintain is with the reader, as he is the only superhero who is consistently aware that his world is a relatively meaningless, fictional one, mass-printed into comic books. That’s what she said! 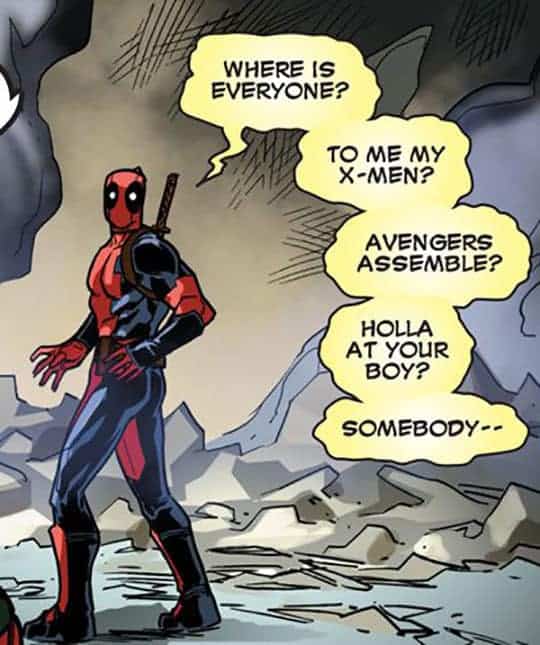 With his incomparable amount of combat-related exposure alone, Deadpool has every right to be that guy in the shadowy corner of the bar, smoking a cigarette and pounding down shots of what he calls “the only thing that makes me happy”. Let’s consider the Iraq War. Roughly 1 in 5 marines without a psychiatric diagnosis returned from the war with clinically significant levels of PTSD. Furthermore, research suggests that predictors of developing PTSD include amount and degree of combat-exposure, poor unit cohesion (i.e., working alone), lack of social support and traumatic brain injury (TBI) (Booth-Kewley, et al., 2013). Deadpool has ALL of these risks! Not to mention that his “I’ve seen some THINGS, man!” portfolio also includes, but is not limited to, (1) a murder list in the 1000s, (2) repeatedly seeing himself dismembered and disemboweled, (3) witnessing gruesome deaths of loved ones, and (4) dealing with the potential existential strain of repeated time-travel and teleportation. Deadpool has frequented the worst of this world, surrounded by the morbid, devastating horrors arguably beyond the comprehension of any other superhero. Zip-Bop-Zoobidty-Bob!

So, with all of these tragedies (that are ongoing and stacking), why does the merc with the mouth have such an outstanding, unyielding sense of humor? Because using humor as a defensive mechanism is a highly effective, empirically supported coping skill. Here is what the research shows (see Scott, 2015 for review):

Deadpool is not alone in being both exceptionally funny and psychologically burdened. For instance, the British Journal of Psychiatry found that, compared to the general population, professional comedians are more likely to present with mental health issues and conditions similar to bipolar disorder. Examples include Robin Williams (Mrs. Doubtfire), Stephen Fry (V for Vendetta), David Walliams (Little Britain), and Lee Evans (There’s Something About Mary). This may also include Reid Ewing (comedic role in Modern Family), a well-respected actor recently interviewed by Shrink Tank’s Dr. Verhaagen (https://www.shrinktank.com/an-interview-with-reid-ewing/).

Now, this is not to say that humor is a cure all. For godsake, look at Deadpool — that man is NOT well balanced! But, it can be a very useful coping skill, especially in conjunction with seeking social support and direct problem-solving. So, next time you are stressed or must choose between laughter or tears, consider the Deadpool approach — find the humor, and go eat a Chimichanga.

…oh, but don’t go out and viciously kill people… or maim yourself… or engage in high-risk behavior… or sleep with Death incarnate. 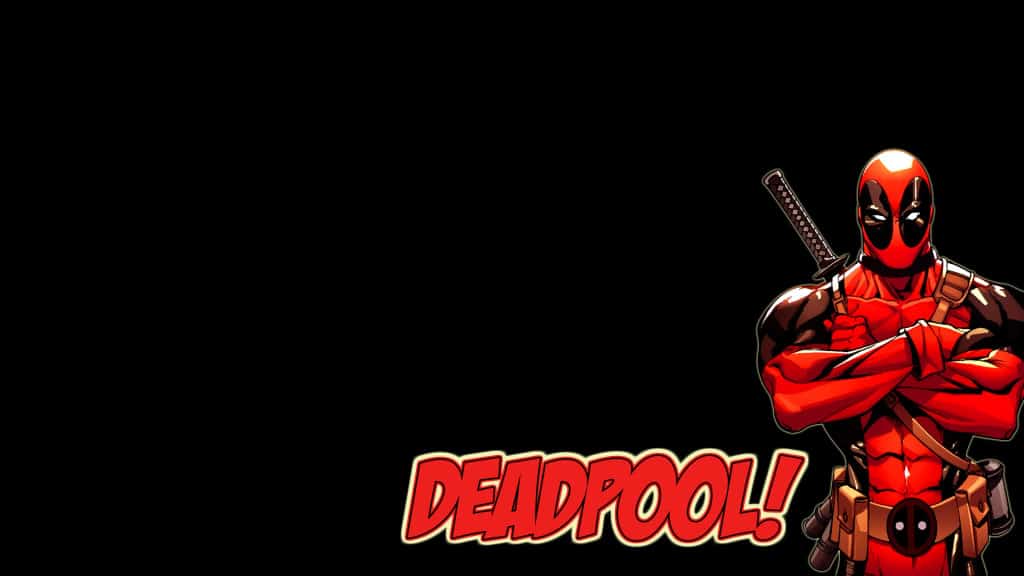 A Psychologist’s Perspective of Howard Stern: Why Therapy Works