Each week, our team of mental health experts breaks down the week’s episode of ABC’s hit, ‘The Bachelor.’ Whether we’re remarking on the mental health of the contestants, or the corny moments we can’t unsee, we catch you up with all the tea being spilled on Arie Luyendyk Jr.’s season.

This week’s episodes of The Bachelor had two grueling two-hour episodes. I’m sure we are all on the same page on that being way too much Bachelor nonsense for one week.

It started out with the Women Tell All in which everyone got to sandbag Krystal the Yogi one more satisfying time.  Nothing came out of her airtime except she was called out for using a fake voice in the show which was amusing.  Then Bachelor Arie came out and there were a lot of tears as per usual – “Arie I thought you loved me” [insert every contestant’s name here].

Becca was upset because everyone judged her for her age–which was ageist–but she didn’t use that word because she was too young to know about it.  Then Caroline the Realtor called Arie out and said “I know what you did and I can’t believe you did it,” implying Arie may have murdered one of the final contestants?? Then Arie just nodded and they moved on!!! What the hell was that?!? I suppose that teaser will become clear on the final episode but I personally wanted to throw my shoe at the television after watching her say that a dozen times before each commercial break and then there was literally nothing else said. (!!!!!) 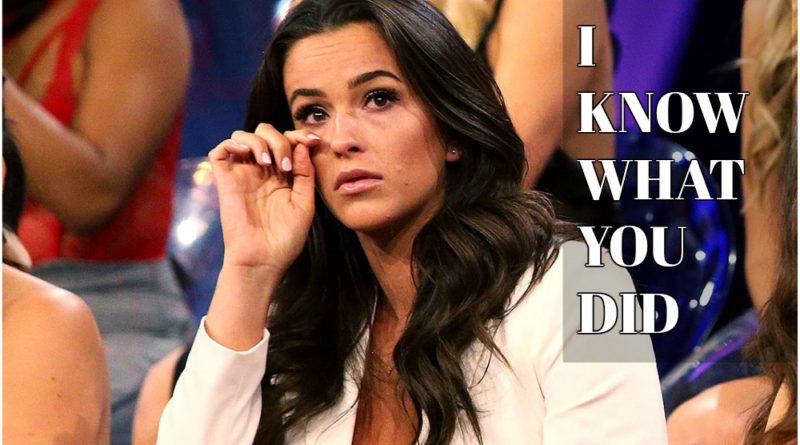 Sometimes this show is just utter garbage and this episode was no exception.  Nothing else happened in this episode that was worth mentioning.  Although they did show Arie’s blooper reel which demonstrated that his maturity level rivals that of an 8-year-old boy. He consistently inserted awkward fart noises in conversations that were uncomfortable for him.

The second episode featured Arie finally kicking Kendall the Taxidermist off the show.  I think we all knew Kendall was far too interesting for Arie; he needs someone that is as emotionally void as he is – like an iguana or a lamp post.

The next episode we will find out who Arie picks in the final THREE HOUR finale. At this rate, I feel like being shot in the face would be more pleasant than a three-hour finale.

The Bachelor has been teasing one of the contestants’ ex-boyfriends showing up and proposing which turned out to be Becca the Publicist’s ex.  My strong reaction wasn’t to him showing up out of nowhere and surprising Becca–that was pretty straightforward and anti-climactic after she shut him down and he left immediately.

I was more blown away that The Bachelor producers would not only give this nut job the name of her hotel but her room number as well! What if he went crazy?  Luckily, when she dodged him he took it like a champ and simply posed a few times for the camera trying to silently convey that he should be the next Bachelor. Ha-ha-ha. What a d-bag.

This had really nothing to do with the show but did anyone notice what Lauren G. was wearing?  It was as if she knew no one could possibly remember her and was trying to communicate “Hey everyone look at me! Look at me!! I’m into S&M!! Aren’t I interesting AND sexy?!?!”

Why does it feel like after all this time Lauren the Black Belt and Arie are still getting to know each other even though they are now saying “I love you”? It is painfully boring to watch them interact.  I would rather simultaneously stomp on a bee hive while being forced to do my taxes instead of watching them interact any longer.

It’s so hard to say who will be the winner of this season of The Bachelor.  I’m betting on Lauren B. considering Becca is engaging, thoughtful, and has other romantic options. But Arie has been unpredictable with who he keeps this season.

What ‘The Marvelous Mrs. Maisel’ Teaches us About Change