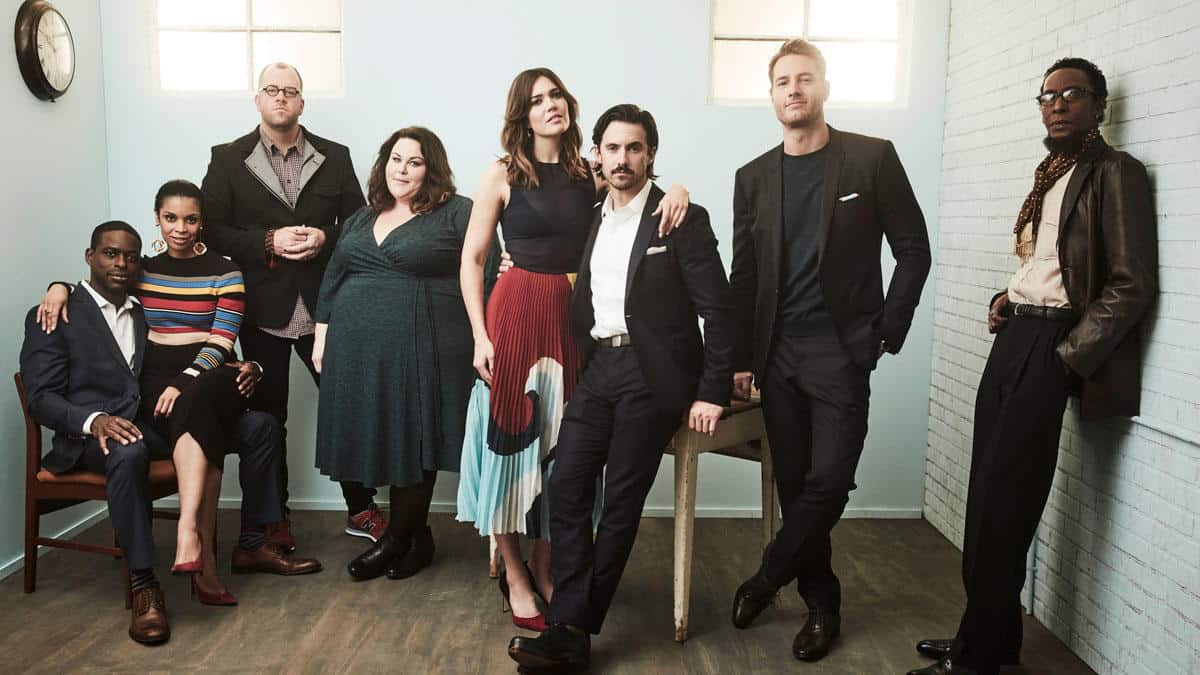 The second season of NBC’s heart-wrenching drama This Is Us has plunged us into another year of tears and pulling loved ones close (and holding each other’s faces, anyone?). This Is Us aims straight for our amygdala’s and does a very thorough job.

[dropcaps type=’normal’ font_size=’48’ color=” background_color=” border_color=’#f7c520′]F[/dropcaps]rom the perfect music pairings to the dreamy lighting to the writing, Season 2 of This Is Us delivers the shock, emotional montages, and vulnerability that has viewers hooked. This season opened with William’s soothing wisdom—a relief to those who wondered if he would hang around in Season 2—and a reconciliation for Jack and Rebecca after their stony separation in the Season 1 finale. But that relief didn’t last for long…Season 2 sent us straight to the charred rubble of the picture-perfect family home that once was. [highlight color=’#f7c520′ background_color=’#ffffff ‘]Roller coaster sized stomach drop.[/highlight]

Though viewers still remain in the dark about what caused the house fire, Season 2 has pulled no punches in confronting the legacy of trauma and loss in the Pearson family—Jack, Rebecca, Kevin, Kate, and Randall. The show established itself in Season 1 for its boldness in tackling mental health struggles and capturing raw pain, brought to life by the more than convincing performances of the cast—Randall’s panic attack, Jack and Rebecca’s fight, and Kate’s cathartic release of anger in Season 1 being of the most memorable moments.

Season 2 brings even more vulnerability and explores even deeper layers of character struggles.

The conclusion of episode 1 gets to the heart of the current season: the Pearson’s have nowhere to run from the burnt-down houses of their past. The opening lines of the episode, “Things Not Said,” frames the character arcs that have played out over the past 10 episodes. As the writing beautifully weaves together the stories of each character, we see which characters are running from and tripping over the past, and which ones are embracing it and rising in the struggle. 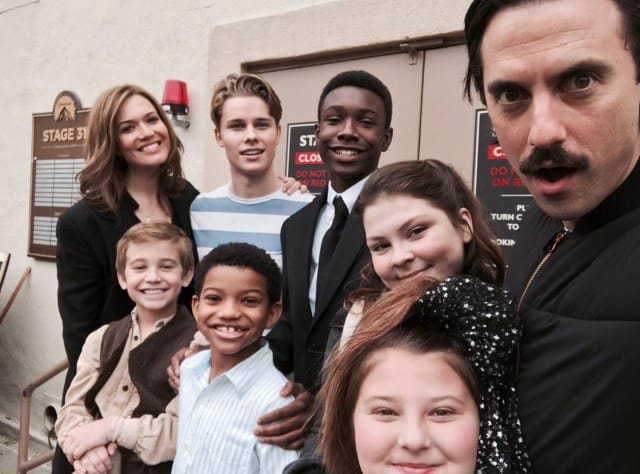 I don’t know if the writers have encountered Dr. Brené Brown’s work, but they are certainly teasing out her message that owning our stories is a pivotal component of healing. Otherwise, our stories own us. The interconnectedness of the character storylines emphasizes that not one character struggle exists in isolation, but in the context of their family histories and collective experience of loss. While the show explores a wide range of mental health concerns—addiction, trauma, blended families, attachment, abuse, body image, anxiety, and grief—it’s landed on broader theme of inherited pain, and the layered, life-long journeys of healing that follow.

[blockquote text=”We see which characters are running from and tripping over the past, and which ones are embracing it and rising in the struggle.” text_color=”” width=”” line_height=”undefined” background_color=”” border_color=”” show_quote_icon=”yes” quote_icon_color=”#f7c520″]

The biggest surprise of Season 2 (so far) came in the revelation of Jack’s brother, and the fact that Jack was doing more than mechanic work while serving in Vietnam. It seems clear that Jack lost his brother in the war. Jack’s locked-up grief and wartime trauma, as well as his history with his father’s addiction and abuse, grow heavier as they sit untouched. Jack hides much of his pain from Rebecca throughout their marriage, protecting her from the abuse of his father and his time in Vietnam.

He’s built up as the perfect husband and father, exhausting expectations to meet while he dodges the hurt of his past on his own. Jack asking for help as he takes steps to become sober a second time is a moment of growth. In naming his struggles and acknowledging his history, Jack is free to be imperfect but has a tough recovery ahead.

Shame loses its’ power with Jack’s face in Kate’s hands.

Kevin, whose storyline started on a sparkling note this season, wrestles in the past with Jack’s unveiled weakness and vulnerability, and in the present with the loss of his father and spiraling addiction.

Kevin can’t bear to watch his dad praying on his knees for peace, while viewers watch Kevin cry out for help on a former classmate’s lawn in a present-day, cringe-worthy scene. Kevin, like his father, is built up as a hero, while carrying an immense burden of grief and resisting any reopening of the past. He’s torn by the incongruence between his public persona and the lens of shame through which he views himself. We see Kevin’s yearning for his father’s comfort as he imagines his former coach speaking to him and hugging as his father. He brushes off Kate’s warning that ignoring grief is like taking a deep breath and holding in forever—which is spot on. “He’s just like you,” Kate says with a nod to her father’s urn. The show is honest in portraying a man with a bleeding heart, and doesn’t try to clean-up the sweaty Kevin Pearson. He seems to have broken in the season finale, unable to maintain these two selves—the handsome hero and the man trying to fill the void of his father’s absence. We’re rooting for virtuous turn of events for Kevin when the season resumes.

Randall is recovering from his breakdown in season 1 and still wrestling with giving up control and fear of the unknown in past and present. Like Kevin, Randall is also living the stories of his fathers. This is most poignantly captured in the crazy voiceover-flashbacks-weaving-through-decades thing this show nails: Randall realizes he must let go of Deja, his foster child, as William let go of him. He’s made strides from the child who can’t stray from his trick-or-treating plan to a man learning to lean into the unpredictable journey of being a foster parent. Randall, like most of us, is in process. Beth is certainly a source of strength, as he’s invited her into his battle with control and anxiety over time.

[highlight color=’#31c8a2′ background_color=’#ffffff ‘]In the earlier years of their marriage, his anxiety is more hushed. In the present, they speak to it more directly.[/highlight]

Randall is, as Jack would say, “standing up.” Randall is standing up by integrating his story with the stories of his fathers. He’s seeking in earnest to connect with his parents by adopting, but by the mid-season finale is more intimately tied to William and Jack through his foster experience—split and unbalanced, but making decisions rooted in acceptance rather than control.

We love seeing Jack and Rebecca together, but Rebecca’s solo moments this season have been stunning, cluing viewers into her process of moving forward after Jack’s death. She seems to have engaged in the grief work of maintaining a connection with Jack while recreating her life. 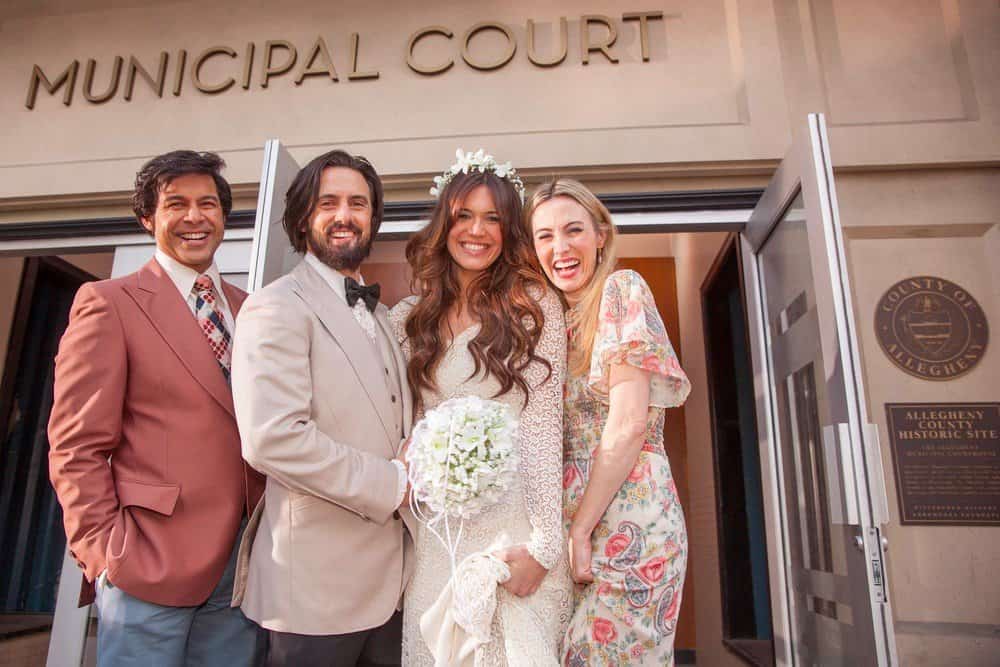 She chooses to open up to the joy of her first grandchild even if it’s unavoidably mixed with the sorrow of Jack’s absence (another nod to Brene Brown here, who says we cannot numb the dark without also numbing the light). As much as Rebecca has voiced veiled criticisms towards Kate, she has also use her voice to call out her mother’s own criticism and racism, articulate the shame Kate is experience after her miscarriage, and reach out to Jack when he tries to isolate himself during his second road to recovery.

A favorite season montage is the layering of Rebecca’s moments in the hospital nursery with her son Randall and with her granddaughter Tess, as Rebecca claims the start of a new chapter. Cher, without Sonny, is still thriving, and drawing from the ongoing presence of Jack’s wisdom to continue to support their children.

Kate’s storyline went from my least to most beloved this season. Where season 1 left her character underdeveloped, Kate’s story has moved beyond her weight and relationships with Toby and Kevin. Kate displays an understanding of internal locus of control—that she can take action in honing her craft as a vocalist rather than being judged by her weight.

She’s faced with another major loss this season, and again with feelings of guilt and wondering if it was her fault. She’s kept her mother at an arm’s length for their entire history. Yet, after Kate’s miscarriage, Rebecca is able to connect with Kate sharing her own experience of guilt and grief after Kyle didn’t make during the triplets’ delivery. Kate’s tempted to numb her loss—go to a gig and a buffet lunch to ignore her guilt and grief. Maybe she remembers her own words to Kevin; she exhales, turns towards Toby instead of letting trauma disconnect.

They are brought closer in facing the loss together, a picture of post-traumatic growth.

“A start, a restart, a fresh start”

This season has been darker, more painful, but the character victories have been richer and more rewarding (see some favorites below). I’m certain that we’ll continue to see the Pearson’s move in and out of seasons of struggle and healing, gaining new understanding of and finding meaning in the past as they enter new decades and life roles. The characters connecting with their stories, even as they face heartbreaking loss, are the ones “standing up,” ready to support the ones who are “falling.”

Fleet Foxes’ “If You Need To, Keep Time On Me” at the end of “Déjà vu,” as we watch Kevin pop a painkiller after sharing with Kate that it’s hard for him with their dad, while Rebecca and Jack rekindle romance in their marriage.

Deja’s goodbye with Randall, Beth, Tess, and Annie in the mid-season finale, underscored by José González’s “Heartbeats,” proving that This Is Us has again earned the tissue box in its twitter hashtag.

The first half of Season 2 delivered satisfying character developments and twists enough for me to ride out Season 2 with the Pearson clan…just not in Kevin’s car. We’re all after him, Beth and Randall.

The second half of Season 2 returns on Tuesday, January 2 at 9/8 c.