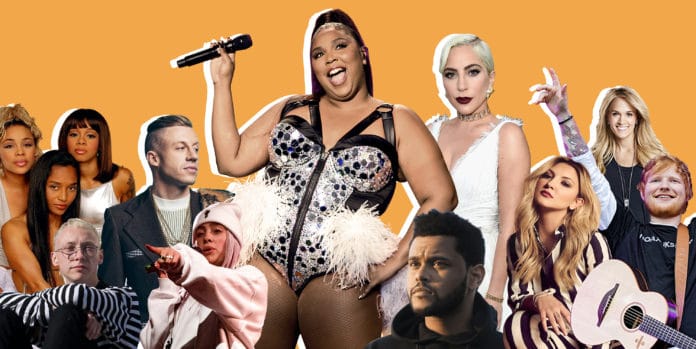 My mom grew up during an incredible era of music. The 1960s was inundated by musicians writing about love, politics, and meaningful life events.

Artists like The Beatles, John Lennon, Joan Baez, Bob Dylan, and Simon and Garfunkel dominated the landscape of writing about advocacy issues, like love and inclusivity during a time of war and divide in our country.

My mother recently expressed to me that her generation of music is the last great era of music writing. Perhaps I’m writing this article simply to rebuke my mom, but we’re also witnessing so many musicians use their art as a platform for targeting mental health stigma and social justice issues.

Right off the bat, there are several musicians that come to mind who embody advocacy: Childish Gambino, Nas, Ice Cube, Kendrick Lamar, and then some—the list is long. The very foundation of rap music is built on advocacy to have one’s voice heard and validated and continues to thrive—these issues are also more prevalent in pop music.

I’ve heard music described as a way to communicate emotions and concepts in a way that we sometimes just can’t eloquently say in conversation, which got me to thinking about musicians and songs that exemplify the use of the written word by artists who are advocates and allies. As the list could truly be limitless, this was a difficult list to curate.

“The very foundation of rap music is built on advocacy to have one’s voice heard and validated.”

In the meantime, I’ve narrowed down 10 songs, some that are somewhat lesser-known, in no particular order, across different genres of music that promote love, inclusion, and acceptance.

Yes, this is a song from the ‘90s and it’s still so relevant in the landscape of the “Me Too” movement in regard to sexual assault awareness and advocacy for survivors.

TLC empathetically writes of the experience of despair and fear of personal safety with lyrics such as “But when they get mad at you, there is no telling what they’ll say to hurt you.”

Naturally, they turn the message to empowerment: “Don’t be a victim of society/You can’t put yourself in a position to be neglected and disrespected/You have to do what’s not expected.”

The lyrics of this song are a breath-knocked-out-of-you type of emotion, especially if you’ve ever cared about someone who struggles with drug abuse. Ed Sheeran wrote this song after visiting a homeless shelter and speaking with the residents about some of their struggles. The story of the subject of the song is a prostitute who struggles with heroin abuse, and the melody is an incongruous upbeat and fast tempo.

Give this song a listen, notice the desire to tap your foot to lyrics that paint an image of being trapped in the grasp of addiction.

3. Dark Times by The Weeknd

Ok, maybe I’m really just finding another reason to sneak Ed Sheeran into this list as he co-wrote and performs in this song. But, seriously, this song is about falling into unhealthy behaviors, feeling lonely and hopeless, all in the context of drug and alcohol abuse.

The lyrics emphasize the pattern of feeling a desire for unconditional love and the destruction that drug abuse brings forth in relationships: “Don’t think my mother could love me for me/In my dark times, in my dark times.”

White privilege is the notion that there are inherent advantages that white people possess due to the fact that we live in a society that historically oppresses persons of colors and minorities.  It is being able to live without the fear of being racially profiled, unfairly stereotyped or discriminated against.

Macklemore writes about his story of navigating and owning his white privilege within the world of rap: “Hip-Hop started off in a block that I’ve never been to/To counteract a struggle that I’ve never even been through.”

“Where’s my place in a music that’s been taken by my race/Cultural appropriated by the white face and we don’t want to admit that this is existing/So scared to acknowledge the benefits of our white privilege.”

This is what stepping into a dialogue to understand the experiences of underserved, disenfranchised people look like, and it’s imperative to use the power that we have as advocates.

5. Born This Way by Lady Gaga

This song is described as an anthem for the LGBT community. “No matter gay, straight, or bi, lesbian, transgender life/ I’m on the right track baby/ I was born to survive.”

Her lyrics also show care and inclusion to persons of color. This song is all about love, acceptance, and being empowered in the body that we have: “There’s nothing wrong with loving who you are.”

Isn’t this a message from which we can all benefit?

I’ll be honest, country music and advocacy issues do not necessarily go hand-in-hand in my mind. So, writing this article challenged me to dig into the world of country music.

Carrie Underwood writes about politics, prejudice and speaks to the importance of supporting one another as opposed to tearing others down: “I, I believe you and me are sisters and brothers/And I, I believe we’re made to be here for each other/And we’ll never fall if we walk hand in hand.”

Evidently, I need to listen to more of Carrie Underwood’s music.

I have a confession. I’ve absolutely fallen in love with Lizzo.  She is so unapologetically herself: powerful, energetic, and a real person.

In a culture that is immensely critical of both men and women for their bodies and physiques, Lizzo has a strong voice in body positivity and self-love: “No, I’m not a snack at all / Look, baby, I’m the whole damn meal (Ooh, baby).” Not gonna lie, I feel like a self-empowered bad-ass listening to Lizzo’s songs.

8. I Don’t Wanna Be You Anymore by Billie Eilish

This young woman used her first album, When We All Fall Asleep, Where Do We Go?, as a platform to talk about her struggles with depression and night terrors.

She writes about her relationship with herself and struggling with self-worth: “Losing feelings getting old/Was I made from a broken mold? Hurt, I can’t shake.” Eilish speaks about mental health openly, with vulnerability and honesty in a way that she encourages people to seek mental health services without judgment.

9. Erase Me by Quinn Christopherson

Every year, NPR’s Tiny Desk series has a contest in which musicians submit their music with the hopes of being selected.  2019’s winner was Quinn Christopherson for good reason.

This is a personal and beautiful song about Christopherson’s experience as a transgender man coming to navigating the power of his voice: “I used to think I was a woman/So I got used to pulling the short stick/Now you all think I’m man enough…I don’t know what to do with all this privilege/Cause I got a voice now/I got power and I can’t stand it.”

Listening to these lyrics are like reading Christopherson’s diary, navigating his identity and how to be in the world.

Recently I attended a P!NK (who is an advocate rockstar as well!) concert and Julia Michaels spoke about her experiences with anxiety.

The lyrics in this song are so personal and truly illustrates the internal experiences of individuals who struggle with anxiety: “And right when I think I’ve overcome it/Anxiety starts kicking in to teach that s*** a lesson/Oh, I try my best just to be social/I make all these plans with friends and hope they call and cancel/Then I overthink about the things I’m missing.”

She continues to speak about how anxiety interferes with her sleep, focus, and self-concept. This is a voice that tells us that we don’t have to hide in our struggles and that support is all around us.

The significance of musicians using their voice to reduce mental health stigma and advocate for diversity and inclusion issues is because these are visible humans with loud and powerful voices.  These people are in the spotlight reinforcing that speaking about these issues connects us, reduces shame, and hopefully helps individuals receive the support they need.

I have so much respect and appreciation to these artists for sharing their stories and normalizing the daily struggles that are so very human, yet we too often hide.  There are too many artists and songs that are left off this list, but in the end, I could only choose a handful of songs.

I hope that this list inspires you, fills you with energy to be advocates, and on a less significant note, maybe settles this debate with my mom.

What is the Greatest Year in Music of All-Time?