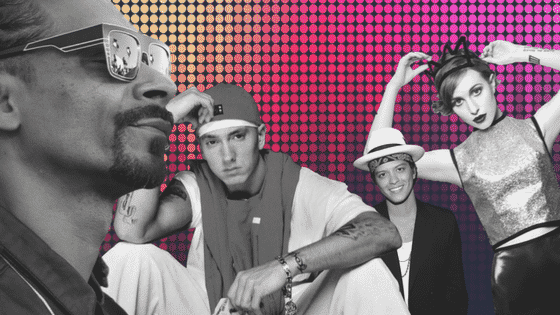 Music is a funny thing.  Like any type of art, appreciating the various forms it may take is a fairly subjective experience.   A song may hold someone’s favor simply because of its nostalgic pull, which often evokes several positive associations assigned to that period of life from which the tune in question arose.

Music appreciation certainly is a reflection of one’s own exposure to various genres.  All this being said, my own list of the top tracks of the 21st century is not intended to be definitive or comprehensive in any way.  It is almost assuredly biased in that, for example, I do not have much love for contemporary country music – I just wasn’t exposed to it that much in my formative years.  Anyway, I will endeavor to propose some thoughtful arguments for my choices, or at least point out an interesting factoid or two.  Whether you agree with my assessment or not, I hope that I might, at the very least, encourage you to consider these songs as emblematic of the times from which they arose.

I’ve compiled my top tracks into a Spotify playlist. Feel free to listen along:

“The Real Slim Shady” – Eminem.  I chose this track because within the sea of tracks produced in 2000 this one completely stands out (stands up?) not only for its stark contrast to anything Hip Hop was cranking out at the time, but also for its breakout video portraying Em’s marketable, if not highly fabricated, mental instability and tendency for throwing some fierce shade towards other celebrities.

I almost nominated “Ms. Jackson” by Outkast for this year, but sided with Missy Elliot’s “Get Ur Freak On”.  Both are fresh tracks that hold up to this day, but Missy Elliot edged out a male rap duo for being such a strong, original lyricist who just happens to be a woman – an especially difficult feat in the male-dominated world of the rap industry.  The use of bongos and the way she changes up her cadence and breaks into random sing-songy bellowing is wholly original and unparalleled to this day.

Maybe the recent death of lead singer Chester Bennington influenced this choice, but there’s no denying the strength of “In the End”, a rap-rock track produced by Linkin Park that passionately depicts relatable themes of desperation and exasperation. 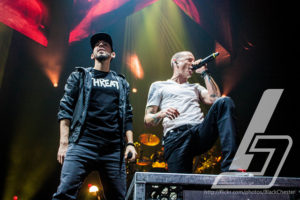 I was almost inclined to nominate Santana’s “The Game of Love” featuring Michelle Branch as it was undoubtedly a song of summer for me that year, but I’m siding with Justin Timberlake’s electric dancey jam “Rock Your Body” because he so expertly channels The King of Pop to craft a real feel good falsetto-laden club banger.

“Drop It Like It’s Hot” by Snoop Dogg may not have been at the top of the charts, but it deserves a place among some of the best tracks for its low production values (it’s mostly carried by a beatbox cadence) that are enhanced with some old-school electro flavor and paired with some tight rhymes spit out by one of rap’s biggest icons.

The Gorillaz, a side project of on-again-off-again Blur frontman Damon Albarn released “Feel Good Inc” in ’05, a masterful track fusing disaffected vocals with dance club beats and a guest spot by old school rap legends De La Soul.  Hard not to nod your head to this one.   Go on, just try.  I’ll wait. 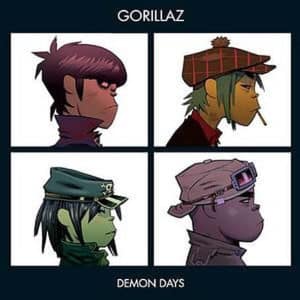 “Crazy” by Gnarls Barkley took an infectious Danger Mouse produced beat and laced it with CeeLo Green’s soulful crooning, punctuated by some stirring strings that, when taken together, made for an absolute stunner of a track.

This one might feel like a far reach, way out of left field pick, but “Let it Go” by Keyshia Cole just oozes nostalgic sexiness.  As they say,  sometimes what’s old is new again.  That is certainly apparent on this track with its old school sampling of Mtume’s “Juicy Fruit”, arguably one of the smoothest R&B riffs of all time. 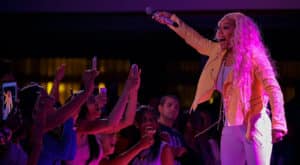 With clever lines like “We pack and deliver like UPS trucks,” a children’s chorus, and some interesting samples including a riff by The Clash as well as gunshots and a cash register, it’s no surprise that M.I.A.’s “Paper Planes” featured prominently in the rags to riches Oscar-winning movie Slumdog Millionaire.  Aside from its ties to that movie it stands on its own as a solidly produced original rap masterpiece.

How could one not like the incredibly effervescent feel-good song of this year, “I Gotta Feeling” by The Black Eyed Peas?  It just crackles with positive energy as will.I.am and crew sing about the fun times that await for them in the evening.  And did you know that the “woo-hoo” line is sampled from “Every Breath You Take” by The Police?

This year the title track from Katy Perry’s debut “Teenage Dream” reminded us about the power of young love with lines like “We’ll be young forever!” and “Let’s run away and never look back.”  It’s a simply sweet and sentimental pop confection – pure nostalgia-infused ear candy.

Ok full disclosure here, because I’m starting to see a bit of a pattern, but I tend to enjoy tracks that put you in a good mood and maybe make you bop your head and/or move your feet.  “Party Rock Anthem” by LMFAO (Laughing My F***ing A** Off) just exploded on the charts in 2011 because, well, it delivered on the promise of the track’s title, making it an anthem at many a gathering. 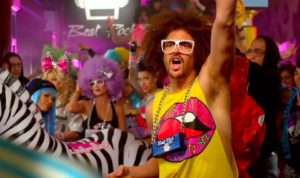 I realize my selection for this year sort of nullifies what I said above because it’s a moodier slow burn of a track, but Gotye’s track  “Somebody That I Used to Know” (featuring Kimbra) was just so unlike anything else out there, thanks in large part to the haunting flute and xylophone-laden sampling of  “Seville” an instrumental song from 1967 by Brazillian jazz guitarist Luiz Bonfá. 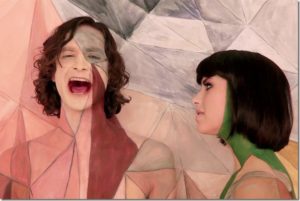 For this unluckily numbered year I was initially going to show some love for Robin Thicke’s “Blurred Lines,” but as catchy as it is, it’s hard to support an artist who was sued for copyright infringement as the song had a striking similarity to Marvin Gaye’s “Got to Give It Up.”  Moreover, it seemed to promote presumptuous, potentially dangerous attitudes towards women (e.g. “I know you want it” and the “Blurred Lines” in question are about attraction and consent, which should not be blurry).  I landed on Macklemore and Ryan Lewis’s breakout smash hit “Thrift Shop” for its silly promotion of fashionable frugality that seems to serve as a critique of the tendency for rappers to brag about their various expensive possessions.

The number one track this year was Pharrell Williams’s “Happy.”  I was inclined to include it here on my list, but as the song inevitably played in my head I was reminded of how, well, UNHAPPY it makes me feel.  Maybe that’s a bit harshly ironic, but let me explain.  Those of you who listen to the non-satellite radio can attest to the nuisance of a perfectly peppy pop song being played incessantly to the point that it becomes so ubiquitous as to be considered a rather devious form of torture (a certain episode from The Walking Dead Season 7 comes to mind).  I went from liking “Happy” and singing along with it to wanting to avoid it at all costs.  Ok – that’s an exaggeration, but not by much really.

Anyway, my pick for this particular year is another left fielder: Paramore’s “Aint It Fun.”  The infectious keyboard loop bolstered with some rockin’ guitar and framed by Hayley Williams’s sometimes poppy, sometimes bluesy vocals was my song of the summer and I still enjoy listening to it to this day.  Sorry, Pharrell. 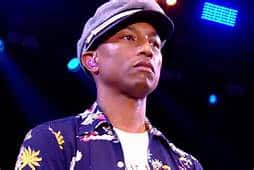 So here we are at 2015 and I contemplated the inclusion of another chart topping smash – “Uptown Funk” by Bruno Mars.  Instead of throwing it out, however, in this case, I think it demands inclusion.   Bruno’s raw talent is unquestionable and, even though I’m still a bit fatigued of this track, there’s no denying that it stands as a masterfully crafted contemporary rendition of some of that old school electro funk.  It incorporates an outstanding horn section too – what’s not to love? 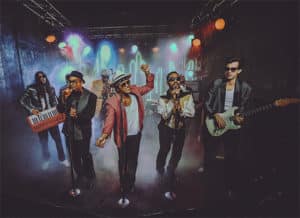 I’m gonna have to give it to the Twenty One Pilots for my song of 2016: “Stressed Out.”  Anchored by a super catchy hook and featuring some clever rhymes (and anti-rhymes) delivered with deadpan panache, this track could certainly stand as the voice of a generation, especially with its millennial theme of nostalgic happiness competing with the stress-inducing demands of reality.

We are two-thirds of the way through this year so there’s no telling what musical treasures lie in wait, but evaluating what’s already been released thus far leads me to select the following track as my current song of 2017: “Redbone” by Childish Gambino.  There was some stiff competition, mind you, in particular, Portugal. The Man’s “Feel It Still,” which wouldn’t seem out of place in a Quentin Tarantino gangster flick (a la Pulp Fiction).  I had to give the edge to  Childish Gambino’s track for his ability to channel our recently departed soul-funk-pop rock superstar Prince.  Nobody delivered sexy falsetto quite like him, but this track comes close.  And c’mon – he’s playing Lando in the next Star Wars standalone film about Han Solo, so he’s got that cred going for him too! 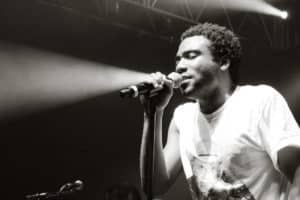 Anyway thanks for reading.  As always, May the Force Be With You!

What are your favorite songs from the 21st century? Let us know in the comments below!