The Philadelphia Eagles and their fans are very lucky I couldn’t watch the last seven and a half minutes of their 15-10 win over the Atlanta Falcons in the divisional playoffs. If I had, the defense would not have made that incredible stand. I am bad luck.

I put the same hex on the Phillies and the Flyers. I’m not bad luck for the 76ers, though, because I care very little about the NBA. My curse only applies to teams I care about. I take my teams very seriously. They provide me with a connection to my family and to my childhood home 20 minutes southeast of Philadelphia, PA. I delight in their wins and am hurt deeply when they lose.

I would like to be able to say I don’t really believe in curses, but I will admit to turning off crucial games so teams don’t catch my bad mojo. I avoid expressions of hope or predictions of victory like the plague, for those would certainly tempt Fate to give my birds a huge karmic ass-whoopin’.

Until now. This—my green-bleeding brothers and sisters—will end my curse. Watch me do some therapy.

Almost every fan I know is superstitious. You may have a ritual or a talisman. You wear a certain player’s jersey or participate in chants during games. You do this to fit in, to be part of something greater than yourself. You also believe—at least a little—that if you do the right thing, your team will be victorious. Alternatively, the smallest mistake will lead to the agony of defeat, and it will be your fault.

My superstition isn’t quite that serious. I don’t have complex rituals or magic objects. In the off-chance I get to go to a game, I do not carry a big “D” or pieces of fence. I wouldn’t be caught half-naked in public, no matter what color I was painted. I just can’t be looking at a TV screen that is broadcasting a game I care about.

My inability to watch some games leads to functional problems and to discomfort, both of which constitute evidence for a diagnosable problem. Sometimes I am invited to events where the game will be broadcast. While I’ve never said “no” to any of these invitations, I have found ways to make myself scarce during pivotal plays. In the off-chance I get to watch an out-of-market Philly game, I occasionally turn it off before the end if the score is tight. Sometimes it’s because I’m just disgusted.

More often, I’m anxious, which activates my belief in my rotten luck. By not watching, I escape discomfort, but I sometimes miss unbelievable comebacks or amazing defensive performances.

For example, during the end of the Eagles’ win over the Falcons, I was at the Prudential Center in Newark watching my Flyers beat my friend David’s New Jersey Devils 5 to 3, so I couldn’t watch the end of the game (somehow, the curse doesn’t work in person), in my mind, paving the way for an Eagles victory. Yes, I watched the Eagles trounce the Vikings the following week, but that game was over at halftime, and no kind of magic was going to change that.

Once the problem is identified, we make a treatment plan.

When very serious, superstitions are often diagnosed as obsessive-compulsive disorder. If you experience any of the things I am describing here and you or someone else thinks they are a big problem, consult a psychologist or other mental health professional.

Superstitions are learned behaviors. We learn them through direct experience and by watching others manage their anxiety. I learned how to deal with game anxiety from my mother. (Sorry, Mom!) I remember her watching games—some of which I was playing—through her fingers with her hands clenched tightly over her face. I also remember her leaving the room when important games were very close.

To this day, she often retires to write reports (she’s a school psychologist—it’s a family business) rather than watch close games. 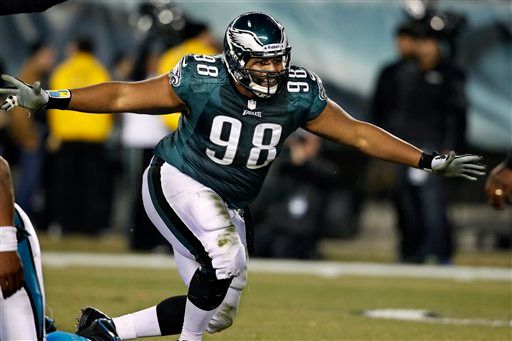 Once learned, anxious behavior is maintained by escaping stressful situations. I learned quickly to break free of the discomfort that built toward the final whistle, buzzer, or horn by turning off a game. Sure, I missed some great comebacks, but I didn’t have to deal with gut-wrenching uncertainty. Turning away felt better, so I learned to turn away.

I am not exactly sure when I learned that I was unlucky, but I can guess: sometime during the many years I’ve been living behind enemy lines—an Eagles fan in the land of Giants and Jets, a Phillies fan in the land of Yankees and Mets, etc.—I turned off a close game because I couldn’t take it anymore.

After I turned to something else, my team won. The learning happened automatically. Very quickly and outside of my consciousness, my brain put together turning off the game, the team’s victory, my faulty belief in a just world, and some strict religious ideas we won’t get into here. At that moment, my brain granted me both immense power and terrible responsibility: if I wanted my team to win, I could not watch the game.

Worse than that, Philly was truly doomed if I told anyone I thought they’d win or did anything but shrug when someone else predicted a victory. Again, my brain automatically linked one of my outspoken predictions of a win to an actual loss. What great power I have.

These ideas are totally irrational (borderline delusional). If I examined the Eagles’ record in the games I’ve managed to watch over the last 21 years, their actual record is probably close to .500. There is no relationship between my viewing the game or my predictions of victory and the final score, but my brain (and yours) makes all kinds of errors—like discounting contrary evidence as a fluke—that maintain my belief in my awesome power.

Even now, your humble narrator is questioning the wisdom of writing about the game. But I know the only way to overcome superstitious behavior is to face the troublesome situation without doing what’s supposed to ward off danger. Doing so repeatedly will loosen the connection between my behavior and the outcome, and my brain will realize those bad and good things happen no matter what I say or do.

Now we treat the superstitious behavior with the best treatment available: exposure with response prevention.

To break the cycle, I must willingly engage in the anxiety-provoking behavior (exposure) without running away (response prevention). So, bombs away: The Eagles will win Super Bowl LII by at least 10 points.

The Patriots’ “greatest-of-all-time” quarterback and coach duo will make it interesting. but the Eagles two wins as underdogs (in truly spectacular fashion the second time) gives them more immediate momentum.

The Eagles will grab an early lead that their spectacular (#1 in points-per-game) defense will guard. Tom Brady will be escorted to the ground several times by Fletcher Cox and Brandon Graham. He will be forced to try complex Triple Lindy-esque flea-flickers that won’t fool the Eagles for long and may ultimately backfire. The Patriots are unlikely to win without a positive turnover differential, and trickery can go wrong quickly. Malcolm Jenkins will make Rob Gronkowski’s return from concussion protocol a non-issue.

The Eagles’ 6th-ranked rushers will cut through the Patriots’ 30th-ranked rushing defense like hot knives through butter. LeGarrette Blount, Jay Ajayi, and (my almost hometown guy) Corey Clement will nullify the defense to the point where Alshon Jefferey, Torrey Smith, and Nelson Agholor can make easy work of big-yardage catches for touchdowns. Zach Ertz will be a standout with clutch catches under duress. I expect a couple of timely plays from Brent Celek, too.

Lots of experts make a big deal of the comparison between the sainted Tom Brady and Nick Foles. Brady’s been here before, many, many times, and there’s no substitute for experience. Relatively few of the Patriots have played against Foles, so experience will be no help there. In their latest performances, Brady showed he can lead his team to a comeback while Foles showed he can lead his team to an insurmountable lead. That with the Eagles defense give the advantage to Foles. Add Doug Pederson’s performance this season, and the Brady-Belichick wonder twins don’t look as insurmountable.

I will watch till the bitter or sweet end, no matter what happens, and writing this will have no effect on the final score. Fly, Eagles, Fly!

This is for my Dad, with whom I share a love of Philly sports. Thanks, Dude. I’ll see you at the parade down Broad Street.