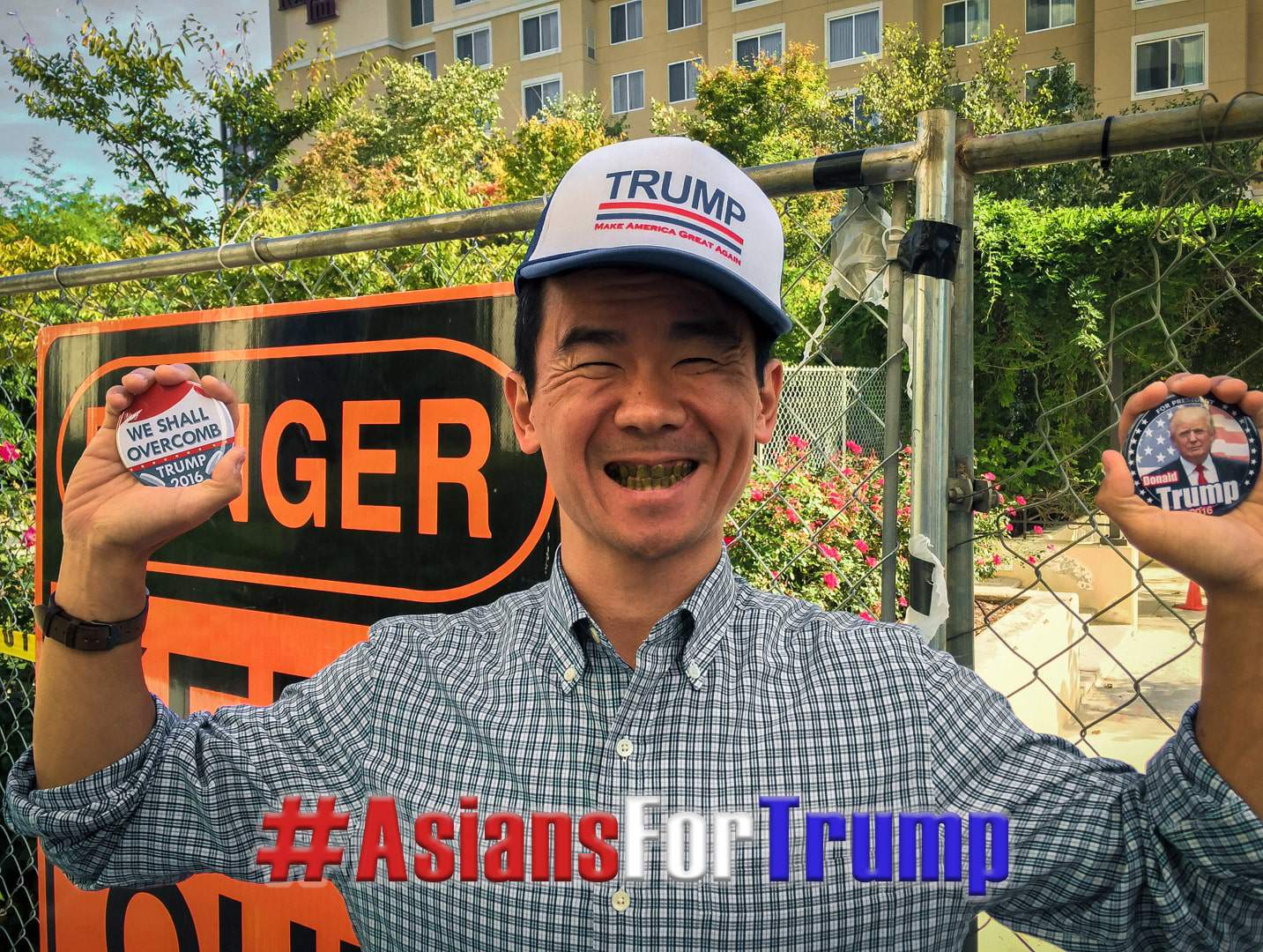 #AsiansForTrump: I thought it’d be funny to go to a Trump rally as a supporter.  So what did I experience and what type of people did I encounter?

This past April Fool’s Day, I wrote a satirical piece on Asians who support Trump. I simply repurposed the well-worn tropes of Asian stereotypes and puns to make a playful argument of why or how an Asian could vote for Trump. 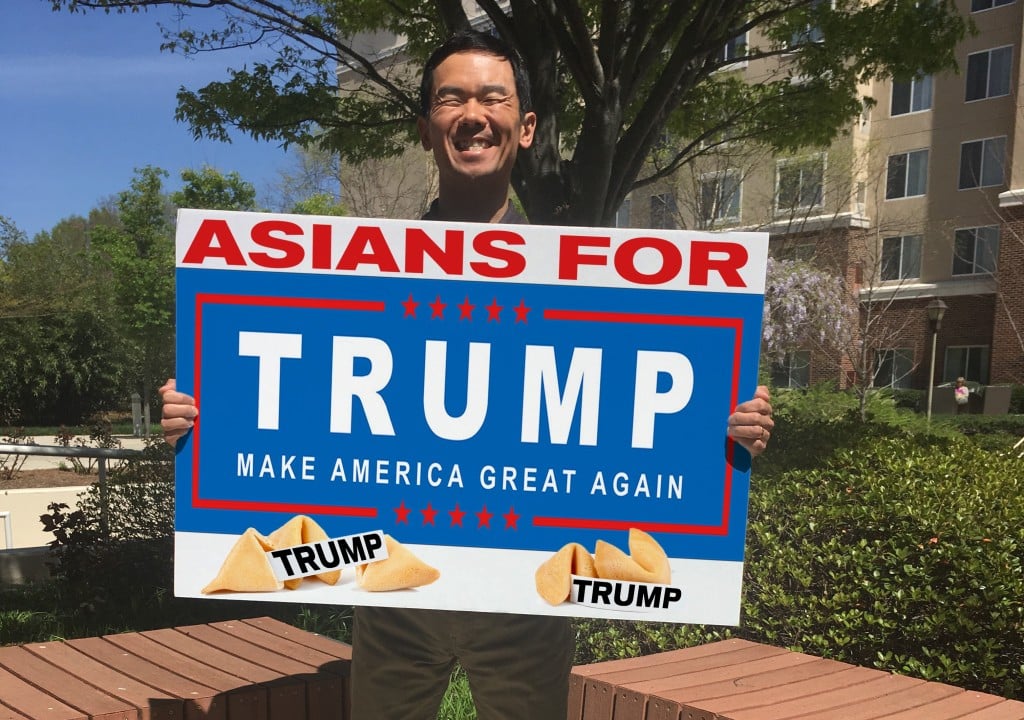 When my social media feeds all informed me Trump would be revisiting the Charlotte area for a Rally in mid-October, I jumped at the chance to attend.  This would be the second time he visited the Queen City. His first visit made headlines for his first quasi-apology that we parodied at Shrink Tank. 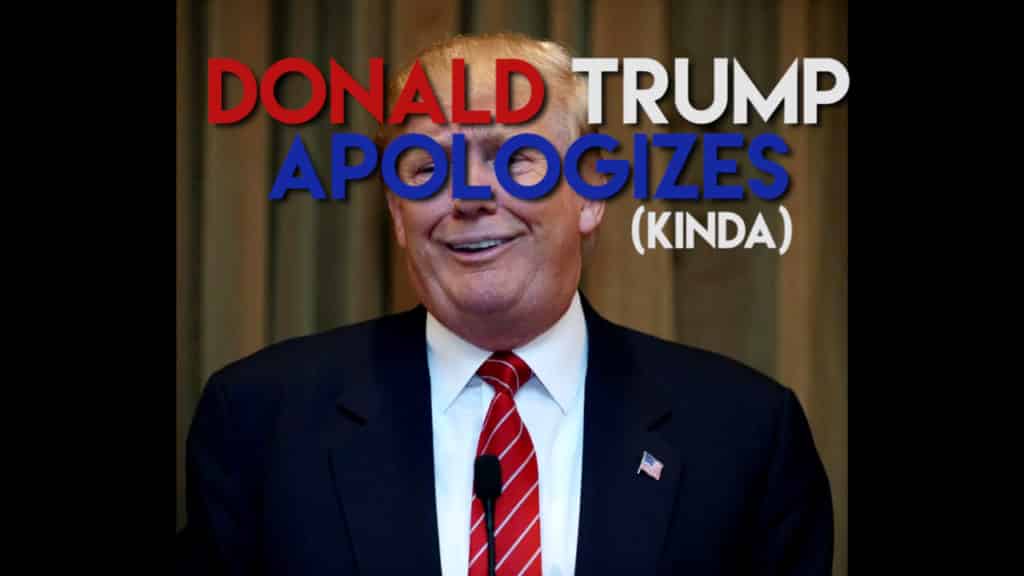 Why, you might ask, would I be interested in attending a Trump Rally?  Well, let me first challenge the obvious response out of the way.  I am not a Trump supporter, and I do not intend to vote for Trump.  You might be surprised how many people came across my Asians For Trump article and believed I supported the candidate.  I even had a reporter from New York interview me about how Asian-Americans feel about Donald Trump.  I tried to answer his questions as honestly as I felt qualified to do so, but the piece never ran, so I assumed he discovered that I was a fraud as the spokesperson for the Asian-American community.

Why did I want to go to a Trump Rally?  I wanted to see up close and personal the chaotic spectacle that is Donald Trump and his supporters. But most of all I wanted to have fun.  And given the terrible, horrible, no-good, very bad weeks that Trump has been recently having, I suspected that this may be my one and only chance to attend a Donald Trump political rally of any kind for the rest of time.

I didn’t have a fully formulated strategy for attending the rally. I wanted to be noticed, but I didn’t want to be a catalyst for conflict, confrontation, or inciting anything that I really did not have any passion for the fight.  There are a number of important causes and issues that I strongly believe in where I am at odds with Mr. Trump.  But for one night, I was going for the fun and entertainment.  I wasn’t there for serious purposes.

My first item of business was wardrobe.  I wanted to have fun and continue to play off of the #AsiansForTrump hashtag that I used when I first tweeted out of my April Fools article.  I thought I came up with some fun and creative mock-ups for t-shirts. 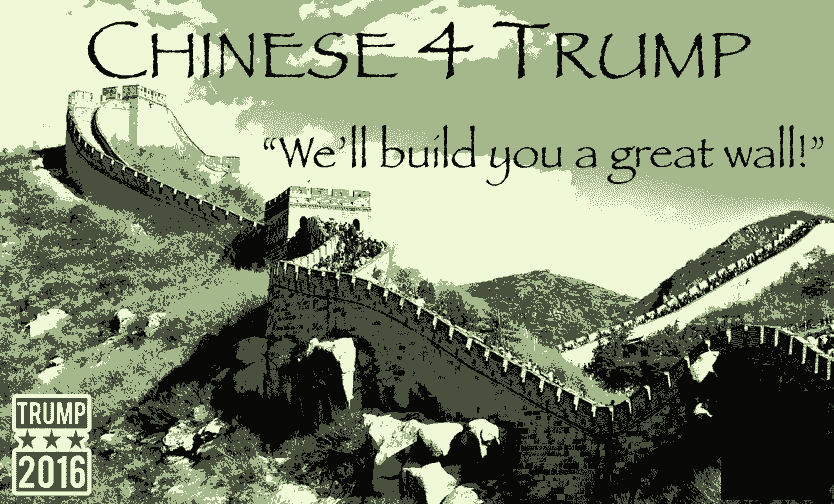 My favorite was nixed by my own daughter because she didn’t want to be associated with supporting Trump in any possible fashion, regardless of whether or not it was serious or satirical.  What a wimp.  I think it’s the best one. 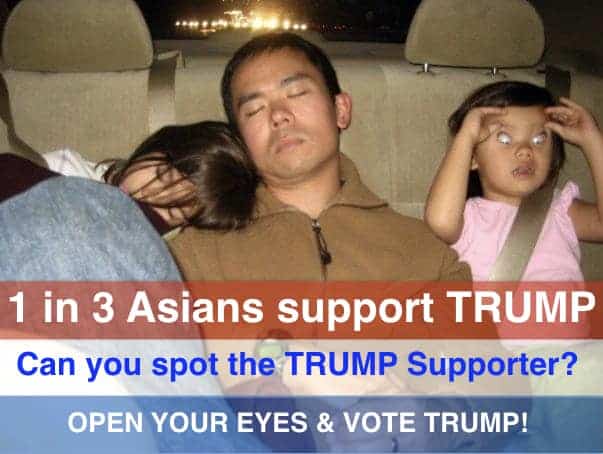 I ultimately chose an image and catchphrase from Alec Baldwin’s playful and sloppy portrayal of the Trumpster from Saturday Night Live.  The shirt was a smashing success with both Trump supporters and critics. 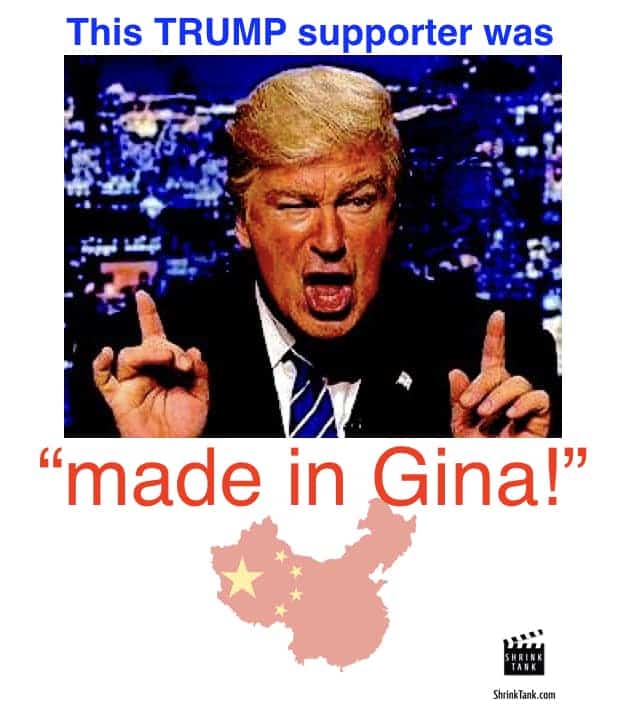 The next item of business was finding partners in crime.  Surprisingly enough, no one wanted to come with me.  Most thought it might be dangerous.  Some couldn’t stomach the idea of even pretending to like Trump.  I understood people’s objections, but they just didn’t register with me.  I believe comedy has a responsibility to tackle serious and important topics.  I don’t believe sensitive issues should automatically be exempted from comedy, satire, or parody.  I also believe we as a culture are becoming too sensitive and thin-skinned with comedy. 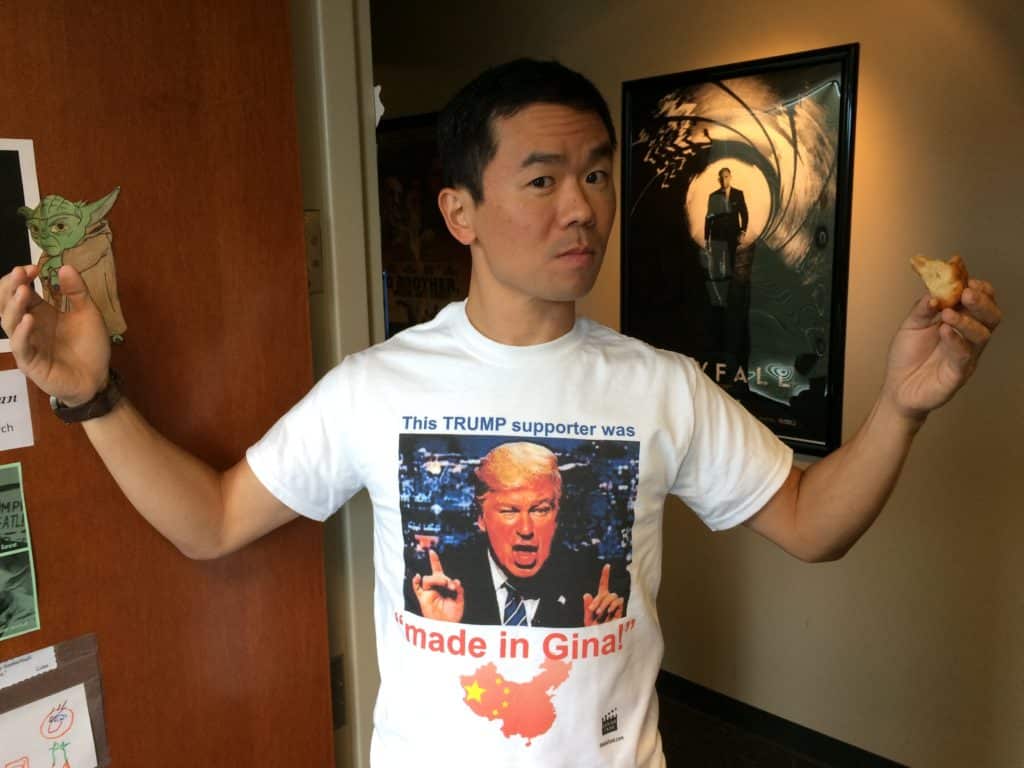 I noticed upon my arrival all the merchandise that was being peddled outside of the convention center.  I loved my shirt and believed in its comedic value, but I also didn’t want to be so plain and normal that I didn’t stand out in a crowd of crazy.  So, for the sake of comedic commitment, I upgraded my disguise.  I feel like my outfit did me up like a typical Midwestern Asian rice farmer. 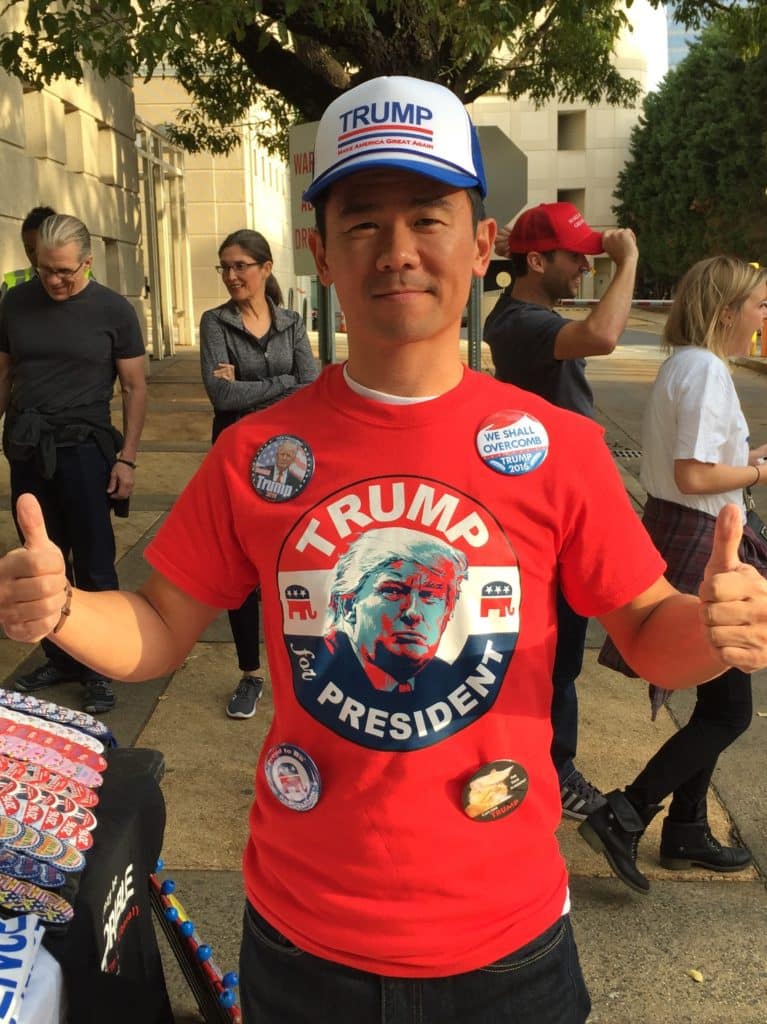 I did not speak but used my non-verbals and behaviors to announce my presence.  My inspiration came from Japanese tourists at Disneyworld and a Korean interpretation of a Rain Man/Forrest Gump character.  People seemed genuinely bemused by my presence and appearance.

I did a lot of roaming where a small band of protesters were gathered, across the street from the convention center.  I must admit that they were a disorganized group of folks.  I admire their conviction and willingness to publicly stand up for their cause.  But their execution and methods overshadowed the message.  Playing a song that champions “Lick my pussy” does not seem like the best choice of music if you are protesting the sexualization and objectification of women.

Also, most of the artists in the group stayed home, because the homemade drawing of women’s p**sy also communicated that the JV team were representing the group that evening.  My wife requested that I take down the p**sy signs from my social media to not offend or trigger anyone who had been a victim of sexual assault.  I complied, but I sensed that the only people who would have been offended would be those that value art or drawing. 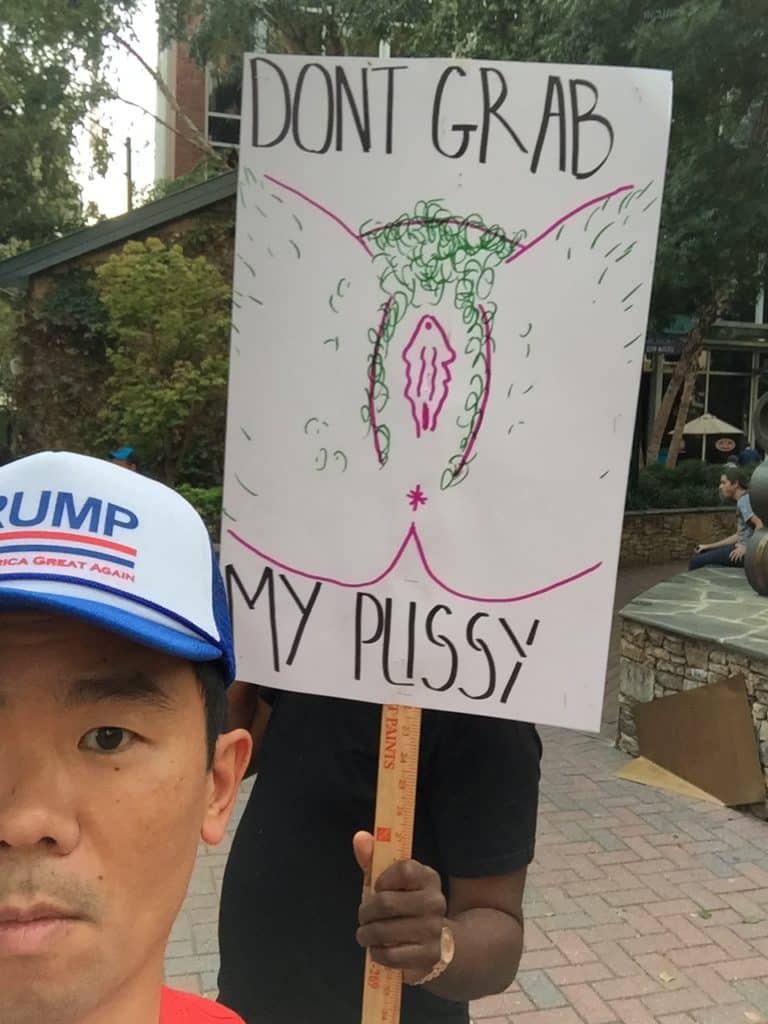 Then I decided to have some fun at other people’s expense.  I encouraged one woman to speak to my lovely wife Julie, who refused to join me at the rally.  I approached a Trump volunteer to beseech my wife to support Trump, thinking it would embarrass my wife.  But I was not prepared for what the lady said to the camera on my phone.

It would not be the first shocking or disturbing thing I heard during the course of the evening.  Not to be outshined, some of Trump’s most ardent defenders engaged in a back and forth with the protesters across the street, shouting at each other in a manner reminiscent of homecoming challenges against different grade groups or how home and away teams egg each other on during a sporting event.

It was around this time that Ryan Kelly, my sidekick for the evening, texted me that he had arrived.  At long last, my great white hope was here.  My white protection that would legitimize my presence. 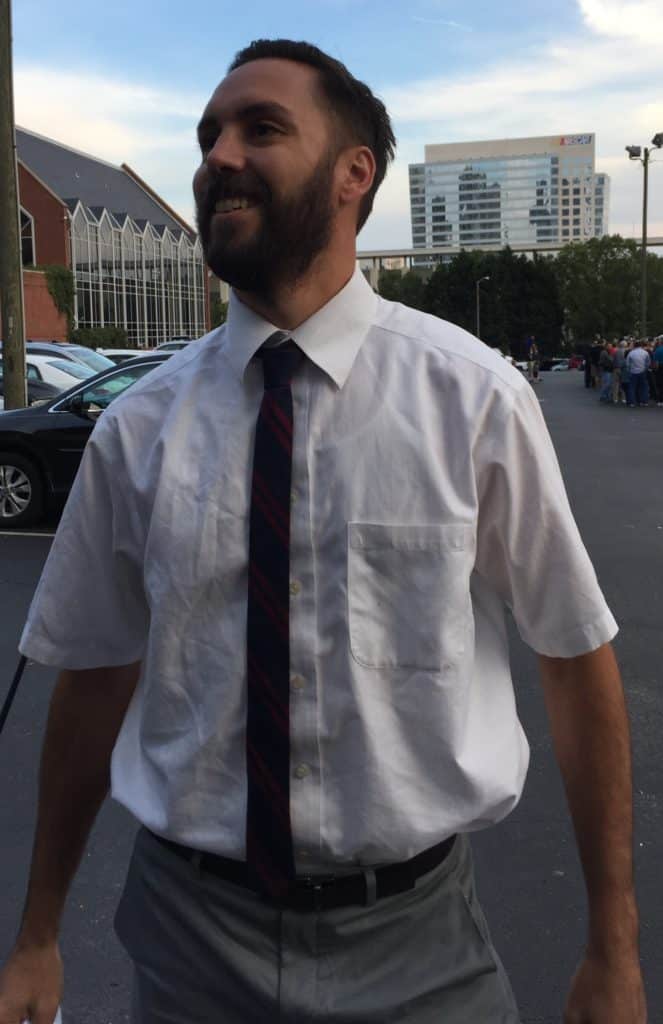 His initial wardrobe cried out hipster Mormon, which I thought would have actually worked given the context.  But not one to be out-fashioned, he donned his homemade t-shirt and I showed him around like I was a seasoned veteran of the landscape. 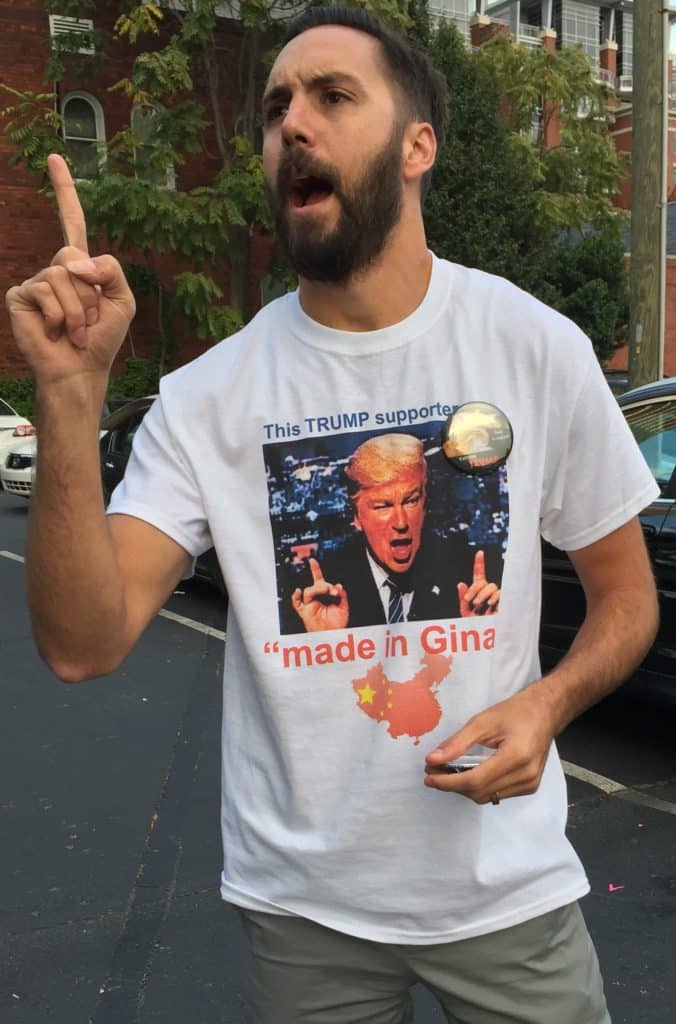 By then some of the protesters had moved across the street as most of the people had moved into the convention center, awaiting for Donald to arrive and speak to his people.  Not one to shy away from confrontation, Ryan and I attempted to defuse the situation as only we knew how – by adding our scent of fear to the situation.

Shortly thereafter we went into the convention and reveled at how easily Trump’s supporters filled up almost one-fifth of the entire convention floor.  Once inside the actual rally, things got a lot less interesting.

We heard a lot of hooting and hollering.  At precisely 7:30 pm the masses collectively chanted “Build That Wall!” The best way to blend in and be inconspicuous is to cheer for the Donald when no one else is cheering!

We were fortunate enough to be right in the path of the protesters when they were escorted out.  I guess it makes sense that Donald would only allow white males to protest inside his rally. Give the man credit, he’s consistent.

But overall, Trump was a big fat bore.  We left before the Donald was done and witnessed many people exiting prior to the completion of his Hillary rant. 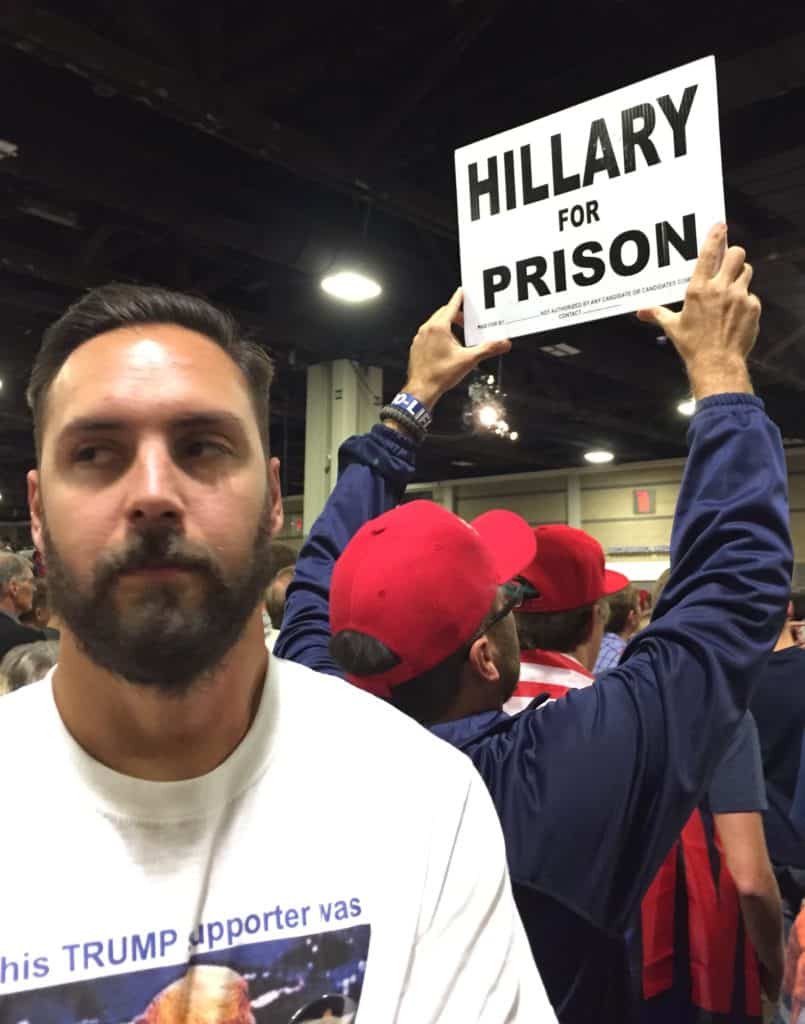 I honestly believe the highlight of the rally for me and several people around us was our lip-syncing of the Backstreet Boys.  Maybe that’s arrogance on my part, but I am convinced that secretly Ryan and I brought a little bit of unbridled joy into the lives of those around us in a way that Donald Trump failed to deliver.

So, what were my biggest takeaways from attending a Donald Trump rally?  Here are some of the insights I gained from my experience. 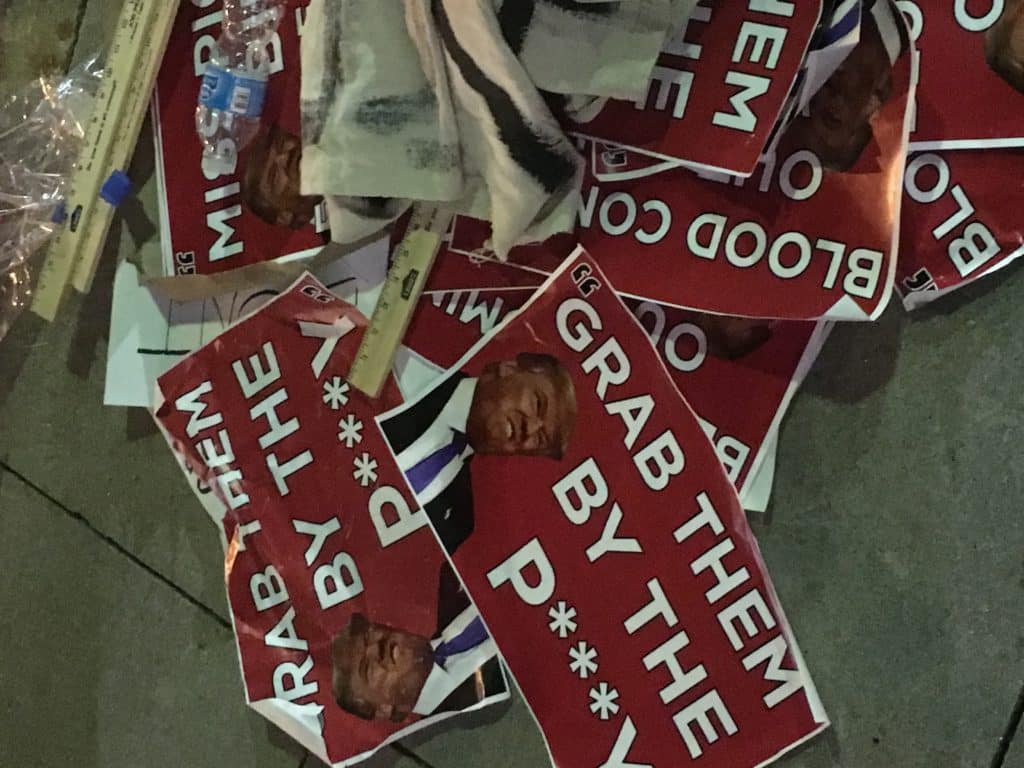 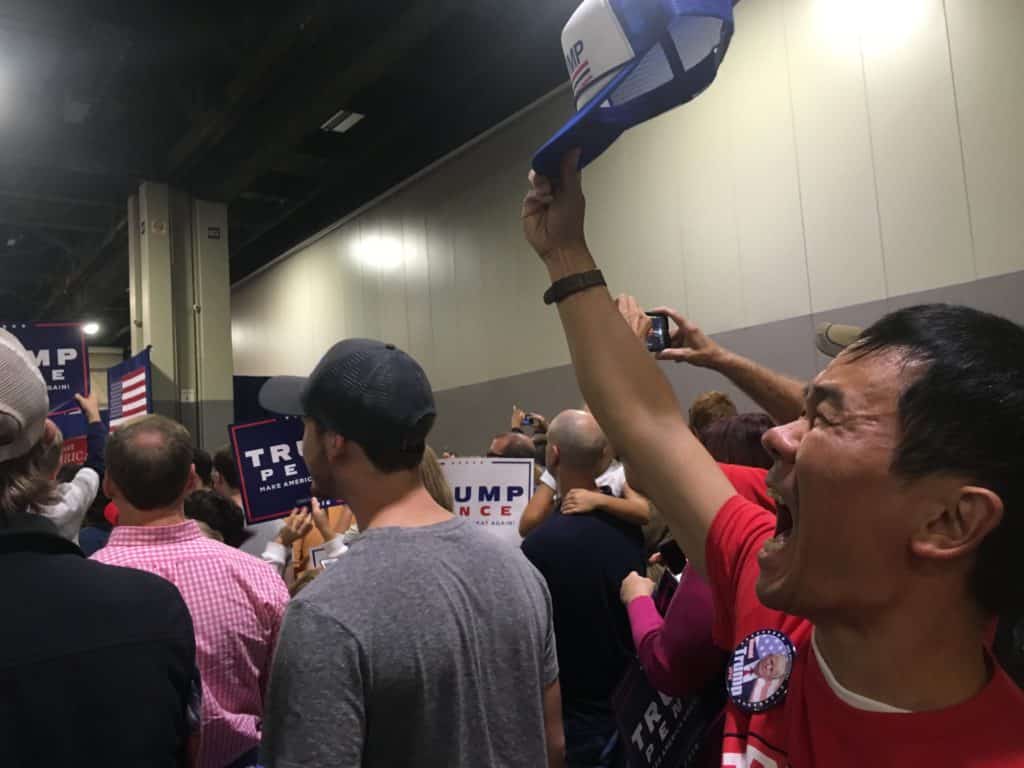 Now I’m trying to pass that jovial spirit onto the next generation. 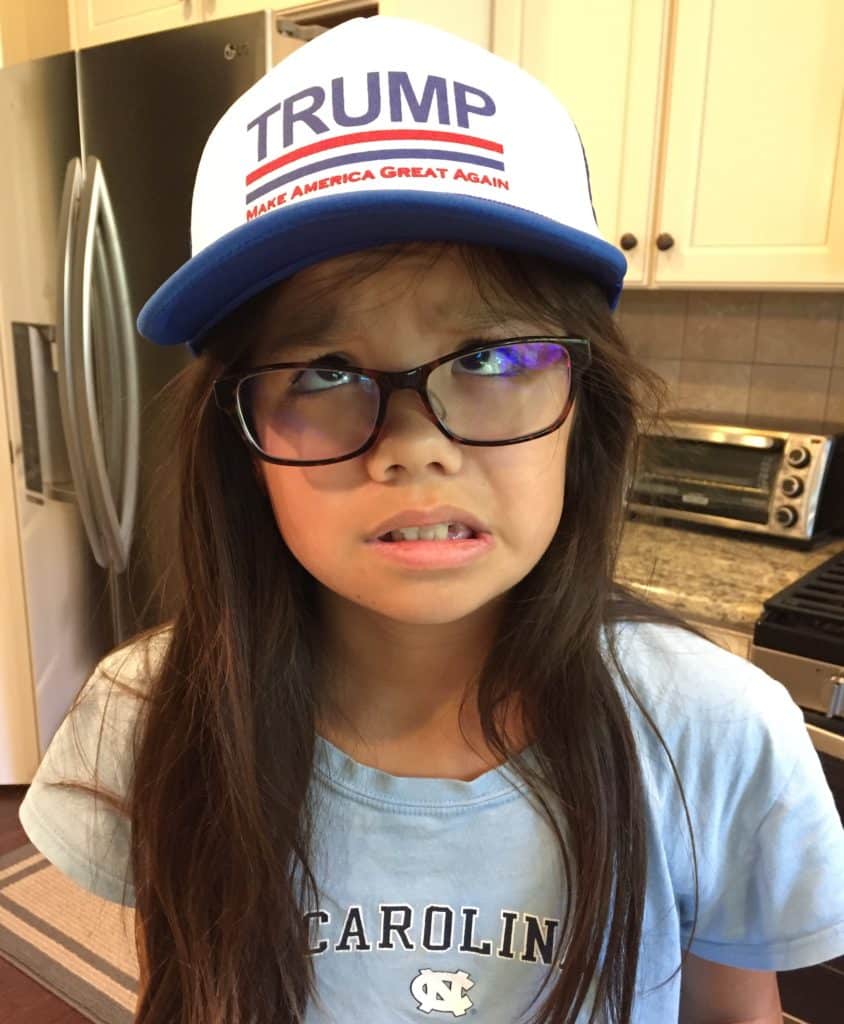