While celebrity “girl fights” is not a new topic, it never seems to be a discussion that people tire of. To prove this, I posted a “Taylor Swift or Katy Perry” status on my personal Facebook page. Here are some responses I got: 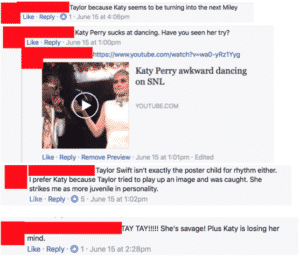 After reading some responses, my question changed from “who is better?” to why does this feud continue to get so much attention? Which squad do you want to join? Who is the craziest? Who really started this fight? Did you hear she is dating her ex-boyfriend?
These questions have been thrown at Katy Perry and Taylor Swift for the past SIX YEARS PEOPLE. Taylor versus Katy began in 2011 and let’s all do ourselves a favor and allow it to end. Now.

For the purpose of this article, I don’t feel a deep need to go into the extensive timeline of Taylor’s and Katy’s relationship or their accomplishments, rather I think we need a quick reality check.

If you are a woman in today’s society, you have learned that if you are quiet, small (with your voice and your body), kind, warm, and a good follower, then you can be “successful.” Yet, put any woman in the stereotypical “successful” masculine role and you have someone who is a CEO, knows how to manage and delegate, and is a leader. I would sadly bet a woman in such a role would face comments such as:

“Will you have enough time for your family?”

“Are you sure you know how to manage a company?”

and who could forget,

“She is so bossy- it wouldn’t hurt if she smiled more either.”

So now picture a woman cutting all her hair off or deciding to sing edgier music… or a woman showing an emotion other than “fine” or “cheerful” …WOAH WOAH WOAH back up! These women sound crazy. 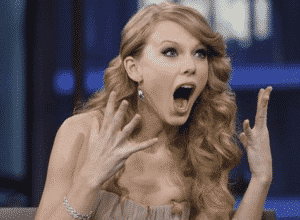 For whatever reason, women have been given smaller parameters for what is socially acceptable while men have more flexibility in creating their own. My main hypothesis for this is both Katy and Taylor originally fit within the small parameters of socially acceptable when they began their careers and stayed in their respectful lane. We saw the small, quiet, nice, cute, amicable, girls who sang sweet songs.

Yet over time, as they became more famous and gained more creative control, they altered their professional image to align with their authentic selves. Katy recently discussed how she struggles with living an authentic life in the public eye and is excited to embrace meaningful change in her personal and professional life. And when cars swerve out of their lane, it catches our attention. Katy and Taylor have been fighting to make their lanes wider and the media is eating it up.

Katy and Taylor have been constantly asked “Who do you think you are?” by the media and the public. Well, it seems as if they are trying to figure that out as we continually try to push them back in their respected lanes we were comfortable with. If anything, I hope their professional journey empowers other girls and women to try to make their lanes wider. While some see “crazy”, I see brave.

Taylor, Katy: do your thing! It is hard enough for women to simply exist in the world.