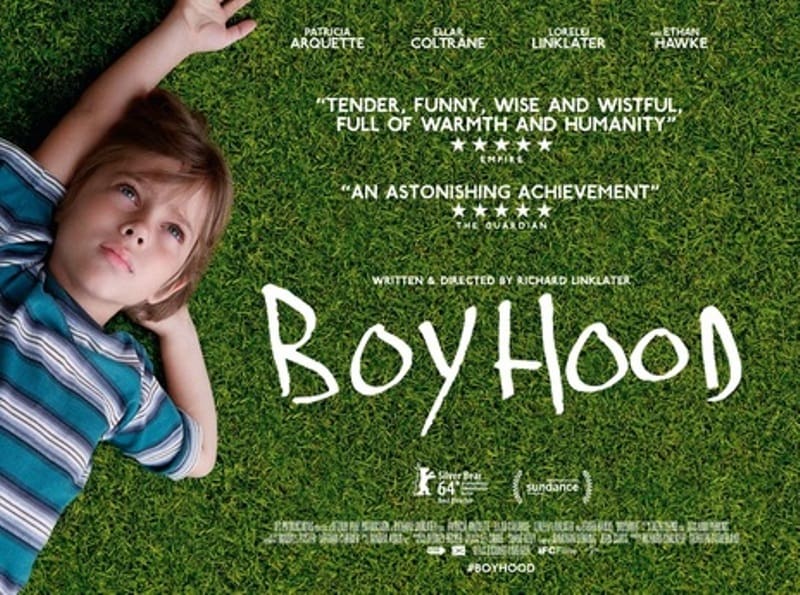 In honor of 2015, I’ve started a series that will cover various topics, ranging from psychology to pop culture.  Each blog post will be formatted into a top 15 list and will appear on our website on the 15th of each month (or as close to as possible).

The Academy Awards will be presented this upcoming Sunday, and Richard Linklater’s cinematic experience, Boyhood, has a strong chance of winning Best Picture, Director, Supporting Actress for Patricia Arquette (the frontrunner), and film editing.  This film, shot for $4 million dollars over a 12 year period, was my favorite film of 2014. 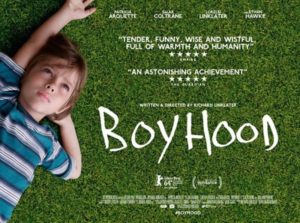 However, the emotional impact of the film, and its startling accuracy of everyday life, elevates its social importance above its unique cinematic story.  Chances are, your experience of the film may be enriched by your own personal connection to the characters or events.  As the youngest of four, raised by a single mother along with two older sisters, my own personal life bares striking resemblance to the story of Mason (Ellar Coltrane), the central character of the film.

The following is observations about real-life that the film accurately portrays.  SPOILER ALERT – the following contains major details about the film.  Read no further if you do not wish to know more about Boyhood.

Most Change is Slow, But Time Also Seems To Fly By – Nothing really happens in the film, because most change is gradual and happens so slowly that it is barely noticeable.  This has been one of the most common criticisms of the film.  And yet, to watch actual people age 12 years over the course of three hours can mirror our own horror and fascination about how quickly our childhood, our children’s early years, and our lives can pass with a blink of an eye.  Ever stop and wonder where the time went, while at the same time complain about how slowly the day is going?  Boyhood is able to replicate that experience.

A Child’s Powerlessness Over Their Own Life – Mason’s parents are divorced.  He sees his dad when his father, Mason Sr. (Ethan Hawke) pops in and out of his life.  His family has to move.  He is forced to change schools.  Mason and his family drive off while his friend is riding his bike, seeming to wish him a final farewell.  As they’re preparing the house to be sold, Mason paints over his own growth chart on a door pane.  Early on, Mason’s life is shaped by events and choices that he did not choose for himself.  Much of childhood is about trying to do your best and adapt to the changes of life as best as possible.  I remember when my father told me my parents were getting divorced.  I remember having to move, having to change 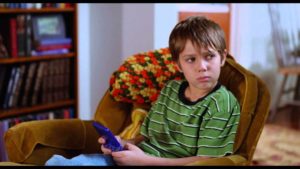 school, and making new friends.  I remember my anger at my own life changing because of choices and decisions made by my parents.  In those early scenes, I identified more with how Mason’s sister, Samantha (Lorelei Linklater) uses sarcasm to vent her anger.  An early scene depicts Samantha saying good bye the the yard, the mailbox, and the house, ending her farewell with “I’ll never like mommy as much for making us move.”  Olivia (Patricia Arquette), their mother, responds with, “Samantha!  Why don’t you say goodbye to that little horses**t attitude, okay, because we’re not taking that in the car”

Co-Parenting and Family Support – Olivia (Patricia Arquette), Mason’s mother, relies on her own mother for parenting support, due to Mason Sr’s constant absences from his children’s lives.  When the mother has primary custody, as is often the case, she’ll take on the role of “bad guy”, establishing the rules and routines.  They hand out discipline and consequences.  The father is often the “fun parent” who, because of limited time, often gets weekends to throw the rules by the wayside and have more fun.  Early on, the film shows dad taking the kids out and staying out later than the agreed upon time.  Upon returning, Mason and his sister Samantha (Lorelei Linklater) Olivia and and Mason Sr., are seen arguing.  Toward the end of the film, Olivia and Mason Sr. have a quick, tender moment of recognition at Mason’s graduation party.  It can be incredibly taxing and difficult on the children when parents go from difficult marriage to difficult separation to difficult divorce.  Rarely do films show the progression of divorced parents who early on struggle to keep personal issues separate from parenting responsibility but learn, correct, and mature over time.

Choosing Your Battles As a Single Parent – This film could just as easily be titled “Motherhood”.  Olivia is the emotional center of the film.  She juggles employment, dating, marriage, divorce, additional education, career changes, raising children, finding love, etc.  Olivia’s life is depicted as a series of bad choices, sacrifice, bad choices, sacrifice, all the while upholding the thankless role of mother and provider.  She doesn’t have time to fully commit to dating.  She doesn’t have time to micromanage her kid’s lives.  She probably doesn’t have many conversations with Mason and Samantha about drugs, alcohol, or sex.  Olivia has to stay focused on the big picture, financial stability for her and her children.  She pours herself into graduate school and becoming a psychology teacher.  I remember my own mother going back to school and getting her Master’a degree.  I remember my mom letting me know early on that if I ever got arrested to not use my one phone call on her.  She told me that if I wanted to go to college I would need to get the grades and earn the money to make it happen.  A single parent can only do so much. 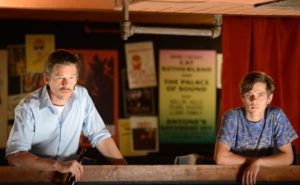 Parenting and Life Fulfillment – The emotional climax of the film centers around Mason leaving for college, when his mother declares, “I knew this day was coming.  I just didn’t realize you’d be so f***ing happy to be leaving.  I JUST THOUGHT THERE WOULD BE MORE.”  To her credit, Olivia doesn’t attempt to live through her children, nor make them responsible for her own happiness, which is why she is still searching and struggling for her own sense of fulfillment as the film ends.  Normal children think mostly of themselves, but that doesn’t necessarily make them selfish.  Parenting is often a thankless role, focused more heavily on a needs of the children.  But that doesn’t make it any more or less fulfilling.  The film is sensitive to not make Olivia too sentimental or unsentimental.  Instead, she just feels real.  Raising healthy and responsible children can make life more fulfilling, but it is not guaranteed to make life overall fulfilling.

Check out Part 2  and Part 3 for more observations about Boyhood’s depiction of real-life.