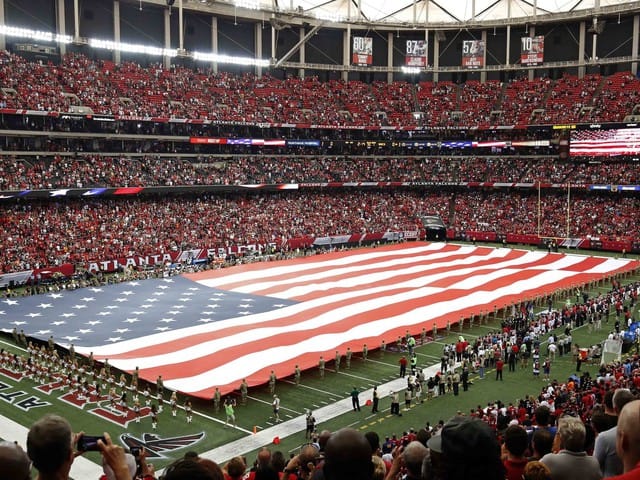 America is struggling with a deep, cultural divide that extends from the White House to the National Football League.  Public opinion is divided on the recent protests by NFL players and the aggressive reaction from President Trump.  To no one’s surprise, whites and conservative Republicans predominantly object to the protests. Blacks and liberals strongly disapprove of Trump’s words.  The views about the protest are sharply divided by race, partisanship, and age.

If a player wants the privilege of making millions of dollars in the NFL,or other leagues, he or she should not be allowed to disrespect….

…our Great American Flag (or Country) and should stand for the National Anthem. If not, YOU'RE FIRED. Find something else to do!

My colleague Shane Owens has written a thoughtful and respectful position on why politics and football should stay separate.  He is not alone in his opinion.  I, however, strongly disagree with my colleague.  I believe sports cannot and should not be immune to the current cultural landscape.  I know I am also not alone in my beliefs.  Here are my central arguments for my perspective and position.

Swapping out “race” and framing the current protests around “politics” or “patriotism” is a cunning move, because many folks blindly support the American ideals and will not tolerate anything that is deemed “unpatriotic.”  But let’s call these protests what they really are … they are highlighting racial inequality.

No one wants to be labeled “racist.”  But use the word “race” and folks (mainly a demographic of white folks) get squeamish.  Why?  Because America has and always has had a RACE problem.  The divisive debate about kneeling for the National Anthem only reinforces that America has a RACE relations problem. Why?

“Race” is a Political Topic for Whites … For Non-Whites, It’s Their Life

I don’t pretend to understand all the complexity to racism and race relations, but for many, the very concept of separating race from a person’s life and identity is insensitive at best and insulting and devaluing at worst.  The ability to talk about race as a compartmentalized subject is one of the more pervasive and subtle forms of white privilege, institutionalized racism, and societal racism.

Justin Gest, author of The New Minority: White Working Class Politics in an Age of Immigration and Inequality, wrote about the catchphrase “I’m not racist” last year for Politico. Gest wrote how racism is perceived as a “‘mute button’ pressed on someone while they are still crying out about a sense of lost status – from a position of historic advantage, frequently in terms they have difficulty articulating.”

Steve Chapman wrote a piece for the Chicago Tribune titled, “Why Do Whites Oppose the NFL Protests?”  Chapman highlights how whites have historically been in a hurry for African-Americans to stop griping about discrimination and get over it.  Whites generally resent organized efforts by African-Americans to raise grievances and seek change. Last year, a Reuters poll found that 63 percent of whites disapproved of NFL players kneeling during the anthem — compared with 17 percent of blacks.  Chapman cites a poll conducted in 1966 where a majority of whites disapproved of Martin Luther King Jr. and his peaceful protests to advance the cause of integration and equality.

“But progress and growth always involve challenge, uncomfortableness, and change. And the folks who tend to push back the hardest are those who benefit most from the status quo or have the most to be defensive about.”

Sports Historically Have Not Been Immune to Racial Inequality and Problems

The Jacksonville Jaguars are the only NFL franchise to have a majority owner of color. Shahid Khan, a Pakistani-born American businessman, joined NFL ownership in 2012.  There are no African-American NFL franchise owners.  African-American males are only six percent of the United States population, but comprise 57-70 percent of college football players and nearly 70 percent of the players in the National Football League, according to data cited to VICE (and the vast majority are between the ages of 15 and 34).  It is the highest percentage of African-American players since the 2003 season.  And yet the institutions of college and professional football remain mostly silent on issues like racism, police brutality and the death of unarmed black citizens.

Let's remember why NFL players started kneeling. They are talking about the need for criminal justice reform and police department reform.

Almost 400 NFL players have criminal records that range from murder to rape, gun possession, drugs. No one took a knee against them.

Racism and prejudice in the NFL is not a sin from the far distant past.  Football has a terrible history of blocking black players from playing quarterback.  Warren Moon is the only African-American quarterback inducted into the Pro Football Hall of Fame.  He endured repeated pushes by coaches to switch positions, assuming a black athlete lacked the intelligence to play one of the most important positions in sports.  If some folks view race as a political issue, then politics will always be a part of sports as long as the majority of players are not white.  It’s not surprising that the National Anthem protests are controversial.  While the majority of NFL players are black, the NFL fan base is 83 percent white and 64 percent male.

Sports Provides a Perfect Platform for Debate and Discourse

It is exactly because sports can bring folks together that it is a perfect vehicle to raise important issues.  Sports is where we can and should debate the American values and ideals.  Sports should be a platform to be educated on and debate problems sexism, racism, homophobia, xenophobia, consumerism, war, peace, domestic violence … you name it. 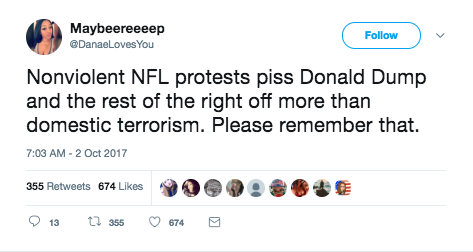 I am all in favor of entertainment and escapism.  But imagine being a spectator at the 1936 Olympics where Jesse Owens stood face-to-face with one of the most evil and tyrannical men and regimes in human history.  Now imagine if you told him, “politics have no place in sports.”  Let’s just enjoy the moment and forget about the ails of the world.  Even today, with the release of the new Billy Jean King / Bobby Riggs film “Battle of the Sexes” highlighting America’s historical and ongoing struggle with gender equality, sports have never been immune to controversy.

The National Anthem Protests Can Spark Awareness and Real Change

People should be celebrating the NFL players’ approach. The protest is silent, not disruptive, and entirely nonviolent. It doesn’t block traffic, occupy police, or frighten bystanders. Eric Reid, a safety for the San Francisco 49ers, recently wrote to explain why he decided to join Kaepernick: “We chose to kneel because it’s a respectful gesture. I remember thinking our posture was like a flag flown at half-mast to mark a tragedy.”  The brilliance of the protest is that you cannot avoid it.  It is right in front of you.

Question: does strong, even hostile, responses to mild gestures of dissent demonstrate healthy patriotism or aggressive nationalism?  Do the lives of black folks matter less than a flag?  Or the singing of the National Anthem?  You may say, “it’s what the flag or National Anthem represent,” but I can counter with, “but it’s still just a flag or a song.  Black lives represent nothing less than the lives of black people.”  Symbolic patriotism needs to give precedence to basic human rights.

For those who claim it disrespects the flag – why don’t you turn your attention and vitriol to the commercialization of the flag and protest hats, shorts, t-shirts and beer companies peddling their product behind the protective placement of the good ol’ American Stars ‘n’ Stripes.  Using the flag to profit, that’s disrespectful!

What Colin Kaepernick started, what Black Lives Matter started, continues to grow and evolve.  Researchers claim successful protests are both visible and effective.  The National Anthem protest has captured the attention of the media, the President of the United States, and therefore the world. Effectiveness is easily defined as changing what is being protested in the long-term.  But effectiveness in the short-term is reaching the bystander; those who have not yet joined the movement.  We are seeing more football players, white football players, owners, and fans joining the movement.

More and more folks seem comfortable linking arms than kneeling during the National Anthem. Research shows most people don’t see themselves as disruptors of social order.  Ultimately, people’s desire to conform surpasses public protests that draw attention to what you believe in.

History always looks back and favors the oppressed and marginalized.  Maybe kneeling during the National Anthem will only be a blip on the radar.  Maybe Colin Kaepernick will merely be a footnote decades from today.  But history favors Jesse Owens, Mohammed Ali, Billie Jean King, and others who used sports to champion causes of progress and change.

“The average NFL football game lasts close to 3 hours. The National Anthem lasts 2 minutes. That’s 1 percent of your entertainment. Is that too much to ask?”

If Football Suffers, So Be It

It’s convenient to blame the National Anthem protests for the declining viewership of NFL games.  However, the data shows the NFL has other problems that contribute to declining viewership.  And it isn’t only the NFL that has a viewership problem.  It is an industry-wide phenomenon that also includes poor rated viewership for NASCAR and the NBA.

But, part of the goal is being accomplished if the sport is suffering.  Black people are suffering.  Minorities are suffering in our country and around the world.  The President of the United States has consistently used dehumanizing and degrading words towards people of color.  Quite honestly, I care very little if your football experience suffers.  And unfortunately, money tends to be the biggest motivating factor for changing the status quo in America, the land of the “not free” but “at a price.”  So hopefully economic consequences will compel the NFL and our culture to evaluate the issues at hand.

If Not Sports, Then Where and When Can We Talk?

Who determines when racial inequality is discussed or protested?  The imbalance of power and control cycles back to the inequality of institutionalized power and privilege.  It puts people of color at a disadvantage to the point where they have to request to talk about race.

When people turn on a football or baseball game or a NASCAR race, they do not want to be unified. It’s competition. There are winners and losers. No, when people turn on a football game, they want to be entertained. And more and more players are pushing back the notion that their sole purpose is to entertain others while real lives and real people are dying and suffering.

There’s a strong chance folks who watch football games on television will not even be permitted to see the protests.  But if television stations have the courage and American ideals to show men and women locking arms and/or kneeling, I hope every person can respect their right to do so and avoid vitriolic attacks on their love of America.

I hope every father and mother will turn to their children and instead of shielding them from the protests take the opportunity to talk about the struggles Americans face make our nation a better and fairer land for everyone.