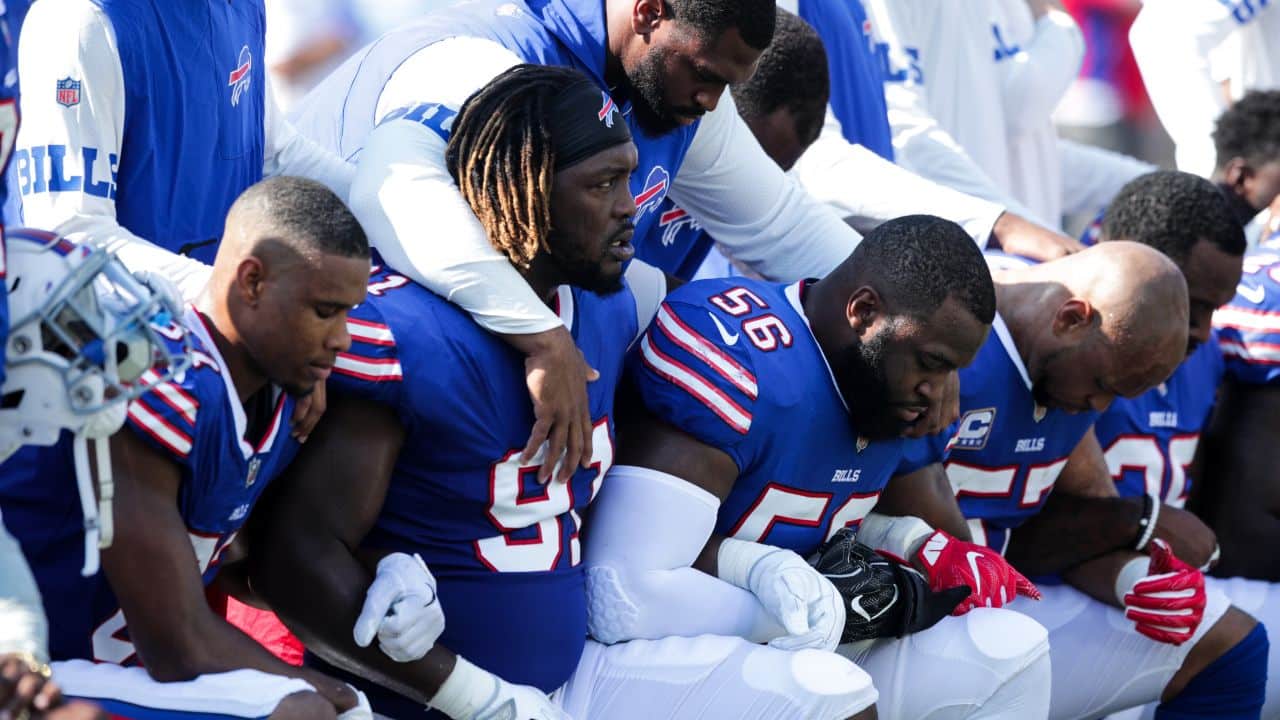 Every Fall, from just before noon on Saturday until the final whistle of Sunday Night Football, like many other Americans, I take a break from everything except for football and my family. This is our time to leave school and patients and politics behind. News channels are forbidden and social media apps that are likely to be filled with political screeds and snark are off-limits. This is a sacred time to be with family, cook and eat good food, and become completely immersed in something that doesn’t matter to me beyond the joy (and, sometimes, heartache) it brings.

Sports are more than that, though. They may be as important to American life as family and friends, and there’s good reason to keep them from being politicized.

In line at the deli, two guys who never met before commiserate about the Giants’ 0-and-3 start. Standing on a train platform, you hear people talking about the savage hit that Danny Trevathan gave Davante Adams in the third quarter last night. On Facebook, Eagles fans playfully taunt Giants fans with NFL Memes. In the weeks ahead, fans of teams in line to win the World Series will hold their collective breath until the last at-bat. They’ll engage in their rituals, hoping to bring good luck and avoid the bad mojo. Sports fandom breaks down barriers between liberal and conservative, rich and poor, black and white, even psychoanalyst and cognitive-behavior therapist. Even when people are rooting against each other’s team, they are united in fandom.

According to research by Daniel Wann, author of Sport Fans: The Psychology and Social Impact of Spectators, sports fans are happier, healthier, and more socially connected.  Taking a break from everyday life decreases the effects of stress on your body and mind. Taking breaks boosts immune and digestive function, improves memory and focus, elevates mood, and decreases anxiety. Watching sports is especially important for men’s health. It provides a culturally-sanctioned place for men to express difficult emotions and affection, according to Dr. Alan Pringle of the University of Nottingham. Being a spectator gives us all a chance to feel the thrill of victory and the agony of defeat without having to deal with the real consequences of those.

There is no escape from the lasting effects of politics. You cannot walk away from debates or demonstrations the way you shake off your team’s loss. Political outcomes are truly divisive and have real-world consequences for people. It may look like I live or die according to the Philadelphia Eagles’ record, but I am truly affected by taxes, healthcare, and law enforcement policy. There are things going on in our country and around the world that demand careful, painstaking attention and debate. Taking intentional time away from those burdens will enhance our ability to make wise choices. When we turn on a football or baseball game or a NASCAR race, we want to be unified.

“We no longer wish to be Democrats or Republicans, conservative or liberal, or any of the other things that set us apart. We want to be together in our love of the sport.”

That togetherness may even spark a new idea or help clarify our thinking. It might help us understand our differences aren’t as great as they may seem.

Well-known people on both ends of the political spectrum see the wisdom in keeping politics away from sports. Jonah Goldberg—conservative and Fellow of the American Enterprise Institute—and E.J. Dionne—liberal Washington Post columnist—believe there should be a “separation of stadium and state.” Neither is a casual holder of political views, yet both see the value in setting them aside for a little while from time to time.

The NFL has lost viewers, sponsors have started to pull away, and DirectTV is offering refunds on NFL Sunday Ticket. A recent poll indicates that the top reason viewers tune out is because of political demonstrations. And while the original knee-taker had a clear message, those who’ve followed him in kneeling, linking arms, or staying in the locker room during the National Anthem cannot tell anyone clearly what their protests are about. That is not an effective way to make a political statement.

There is time enough after the final whistle for us to debate important issues.  There is space beyond the cheap seats where we can wrestle with questions of patriotism, fairness, equality, and justice. Take some time away from politics and work to enjoy each other’s company and engage in debates about whose pitching staff or defensive secondary is better. At least allow those who wish to escape to check out, if only for a few hours.

We all need a place and time away from the fray, to work out our differences on the gridiron or the diamond or the ice, shake hands—maybe even hug and cry a little—then get on with our real and lasting struggles.