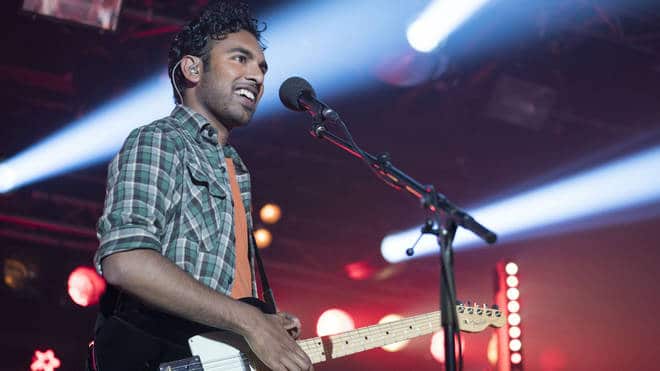 Imagine there’s no Beatles—that’s the main premise of Yesterday, the new film from the collaborative efforts of Danny Boyle and Richard Curtis.

Yesterday fancies a whimsical but thin premise of unsuccessful Suffolk musician Jack Malick, who wakes up one day as the only man on Earth who remembers the group.

The Lennon-McCartney catalogue is suddenly all his.

Himesh Patel may be familiar to UK audiences from EastEnders but is unknown stateside. Jack’s old friend Ellie (played by Lily James), who is now a schoolteacher, acts as his manager. Neither one acknowledges their mutual attraction, but the film makes it plain to us, even if the timeline for their attraction doesn’t sync up.

Is Boyle-Curtis a Lennon-McCartney dream pairing?

At first glance, a marriage between writer- Richard Curtis and director Danny Boyle seems like an odd pairing.

Curtis has been responsible for several classic romantic comedies such as Four Weddings and a Funeral, Notting Hill, and Love Actually. Boyle, on the other hand, has been the creative force behind an eclectic filmography that includes 28 Days Later, Trainspotting, and Slumdog Millionaire.

Stylistically, Boyle employs all of his talented tricks of the trade. It is a beautiful film. Boyle has matured as a director. He has an eye of camera angle and framing but has left behind the quick cuts that he employed earlier in his career. His understanding of filmmaking shows that pacing and scenes need to match the mood of the material and emotions evoked in the film.

In the end, the strengths and weaknesses of writer Richard Curtis are on full display.

One of his overused (or only used?) trope is to place an affable but fangless leading man at the center of the story.

Hugh Grant was his go-to for Four Wedding and a Funeral along with Notting Hill. He used Domhnall Gleeson for About Time. These men seem earnest but lack rough edges. Their lives seem quite inconsequential and thus makes it harder to care about what happens to them.

In Yesterday, Himesh Patel plays Jack Malik with the same beats. He’s genuinely likeable, lowkey, and easygoing—but to a fault.

What didn’t work for me

In the end, Yesterday’s main flaw is that the film plays it safe.

The story lacks any real tension. The actors do fine with what they’re given, but they are unspectacular and affable. The film is predictable other than how they resolve the alternative universe where the Beatles never existed, which I found to be underwhelming and thin.

And yet I had fun with this film

If the story is predictable and it plays it safe like some of the more saccharine McCartney tunes, then why did I like it as much as I did? Well, I guess it’s because—like Paul McCartney’s songs—there is something immensely enjoyable about being swept away by the film’s charms.

There are worse things in the world than spending two hours with protagonists who are decent people who in the end do the decent thing and end up with the person they are meant to be with.

Patel and James are incredibly likeable actors. Ed Sheeran does just enough to appreciate his participation rather than be distracted by it. And Joe Fry steals scenes as Rocky, Jack’s unreliable roadie.

The only performance that didn’t work for me was Kate McKinnon’s Deborah, Jack’s boorish manager. It felt one-note and like McKinnon was performing for a different film.

The film also provides three specific scenes where we get to observe people hear a Beatles song for the first time with virgin ears.

What a delightful set-up, someone getting to hear Yesterday, Let It Be, and a third Beatles song for the first time and to experience the transcendence of the song. I won’t spoil what the third song is in my written review. I will only say that it is the film’s most poignant moment and I also enjoyed how it came at the expense of Ed Sheeran.

I’d grade the film as a solid B.

I wasn’t bored by it and there are genuine laughs in the film. Just don’t think too much during the film and hopefully you’ll be swept away by the magic of the Beatles’ music.